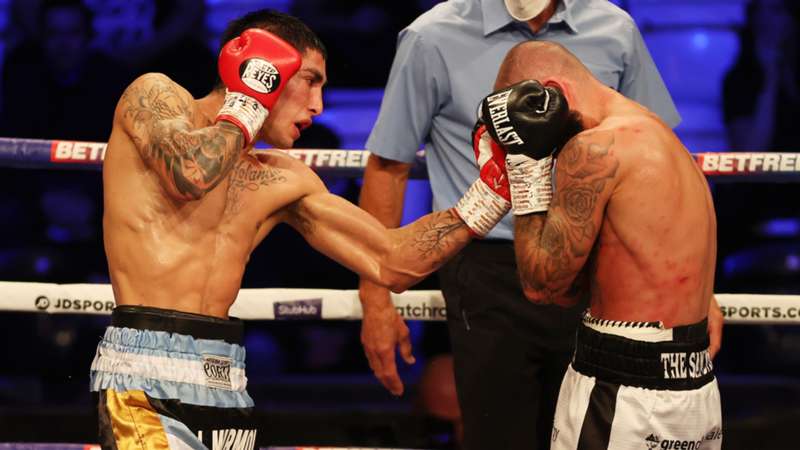 Hearn was commenting on Lewis Ritson's defeat to Jeremias Ponce.

Eddie Hearn has hit out at referee Steve Gray for rejecting Lewis Ritson’s corner’s towel before he was stopped by Jeremias Ponce.

Ritson was ultimately stopped in the the 10th round by the Argentine challenger, becoming the IBF lightweight mandatory challenger, but not before Grey threw back Ritson’s towel to his father.

Speaking to the DAZN Boxing Show, Hearn acknowledged the referee’s responsibility and authority when it came to making such a decision, but he believes it should not be Gray’s decision to make.

“The referee had the right to reject the towel coming in,” Hearn said.

“I don’t think they should have that right, quite frankly, because that’s putting fighters in danger.

“When the towel comes in from the head trainer, particularly in this instance from the father, you can’t throw it back out the ring. That’s not on. In his opinion, ultimately the decision is with the referee.

“In my opinion, you shouldn’t be given that responsibility. You have to act accordingly, I thought he missed the towel, but to throw it out of the ring was bizarre.”

Hearn continued to focus on the effect that denying the towel had on the course of the fight.

“The only thing I would say is it wasn’t like Lewis Ritson was out on his feet taking headshots. But then he was protecting his body, and taking a lot to his head. You shouldn't have the right to refuse the towel, this sport is too dangerous”.