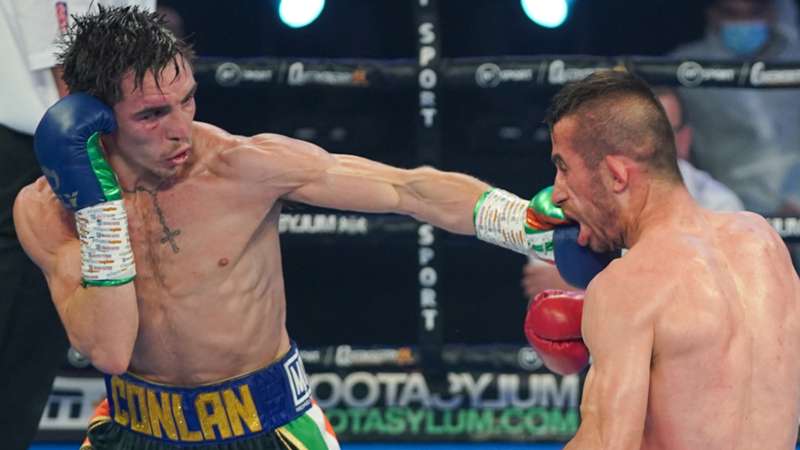 It's now or never for the Irish fighter, as he clashes with TJ Doheny for the WBA interim featherweight title Saturday.

“I want Stephen Fulton in Belfast in August," Conlan called out the WBO junior featherweight world champion in the moments following his majority decision win over Baluta. "With the politics of boxing, will it be possible for then? I don’t know, but we will hope so. If it can happen in August I would love that, but if not then in the winter in New York.

"I will stay active and fight in August no matter what, so it’s straight back into the gym. I know I have to be patient and can’t rush too quick, so if I have to wait until December for the world title then that’s no problem.”

“It’s an all-Irish fight, the biggest all-Irish fight in the last 40 years or so," he said in a Top Rank press release. "What I’m really excited for is that TJ will have his own fan base, and I’ll have my massive fan base out here in Belfast. It will make a difference from my last fights. I’m really excited. I’ve been putting the work in, and I know what I need to do.”

Be clear — Conlan should be excited, for this is the 29-year-old two-time Olympian's opportunity to prove that he's a world champion caliber boxer before his hometown fans and all those who will be streaming the fight live via ESPN+.

Although he defeated Baluta nearly four months ago, Conlan didn't exactly dominate the contest, as the rugged Romanian pushed the Irish fighter to his limits. Conlan left plenty to be desired, considering how often he left himself vulnerable to counters and surprising shots from Baluta while asserting his jab. Point blank — it was too close for comfort before judges scored it 117-112, 115-114 and 114-114 in Conlan's favor as he improved to 15-0, having survived a scare in his first super bantamweight and 12-round fight of his career.

“Baluta is tougher than I thought," Conlan said after the fight. "He’s shown in his last two fights that he’s as game as he come, but he was missing with tons of punches. It was a good fight though and good preparation for what is to come. He held his engine more than I thought he would and he worked every round. It was my first fight at super-bantamweight and my first 12 rounder and the perfect test for where I’m at."

While just doing enough to have his hand raised against Baluta spelled his latest win, a victory over Doheny must be convincing. It must showcase all the skills Conlan didn't demonstrate against Baluta in addition to exuding a world champion confidence if he's going to not fall short. The 2012 Olympics had Conlan capturing a Bronze medal. The 2016 Olympics had "Mick" being robbed of a lock of a win, relegating him to flipping the middle finger at the judges out of rightful disgust.

If Conlan is going to walk out of Falls Park with the WBA interim featherweight title in tow, he's going to have to grab it. Seize the opportunity and shed any close calls or leaving fate in the judges' hands. Take the title with a world champion caliber performance.

Doheny (22-2, 16 KOs) is 1-2 in his last three fights, including a unanimous decision loss to Baluta in March 2020, but he comes to fight. And with the title on the line, urgency will be a factor.

Conlan could take encouragement from Leigh Wood, who delivered a performance of his life this past weekend in upsetting Chinese world champion Xu Can to grab the WBA "Regular" featherweight title.

All of a sudden, the world of opportunity has opened up like an oyster with the title being Wood's new pearl. Conlan can achieve the same and instantly throw himself into the mix of a division that's stirring. The 126-pound weight class touts veterans such as WBA champion Leo Santa Cruz and WBC titleholder Gary Russell Jr. as its headliners, along with WBO champ Emanuel Navarrete.

There's certainly excitement that Conlan can add to there.

But first he must prove that he belongs.

An impactful win Saturday in Belfast will do just that.