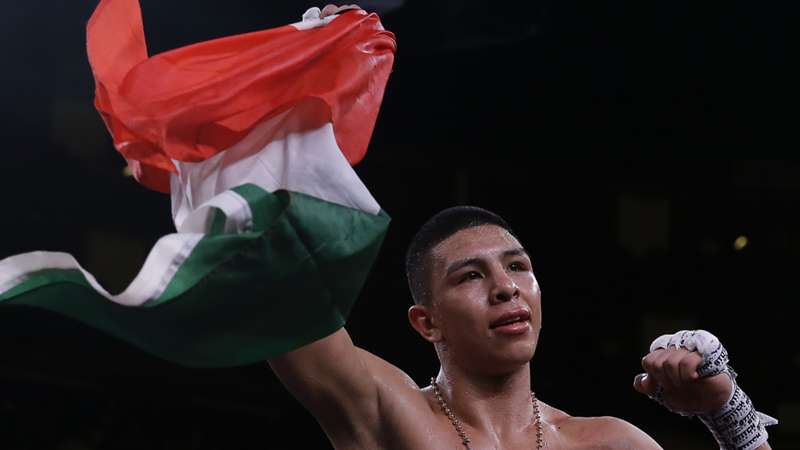 A Mexico vs. Puerto Rico battle is official.

The path to Jaime Munguia securing a middleweight title shot continues on Nov. 13 when he takes on Gabriel Rosado, live on DAZN (excluding Mexico). A venue will be announced shortly.

Munguia and Rosado fought on the same card back in the middle of June, when Rosado notched a "Knockout of the Year" candidate over Bektemir Melikuziev in the third round. Munguia stepped up in the event's headliner and stopped Kamil Szeremeta in the sixth round. After their respective fights, Munguia and Rosado made it clear they wanted one another next, and now they will get to prove who is the better of the two.

"This fight will be full of non-stop action. It will be a war that fight fans will enjoy and a new exciting chapter in the classic Mexico vs. Puerto Rico boxing rivalry," said Oscar De La Hoya, chairman, and CEO of Golden Boy in a press release. "Both fighters are coming off of spectacular performances and knock-out victories that showed their power, speed, and resilience. Jaime Munguia is a super-star; he has all the elements that make a fighter great. He's already conquered the junior middleweight division and is on his way to conquer the middleweight division.  But this is going to be a big test for him because Gabriel Rosado is a dangerous fighter, he has never backed down from a challenge. He has faced and gone the distance with some of the toughest fighters in the middleweight division. This is truly a 'Fight of the Year' contender, a fight that fans will remember for years to come."

Munguia (37-0, 30 KOs) knows what Rosado brings to the table and looks forward to showing he's the better of the two.

“Rosado is a dangerous fighter with a lot of experience,” Munguia said in a press release. “He is a formidable rival that we have to prepare to be stronger and more intelligent in the ring.  He has had the opportunity to fight with great fighters, the best in the middleweight division. I am going to give this fight 100% and as always, give a great fight for fans on November 13.”

Rosado (26-13-1, 15 KOs) has faced the best at 154 and 160 pounds like Gennadiy Golovkin, Daniel Jacobs and Jermell Charlo. The "King" feels he will bring the momentum from the Melikuziev fight into this one with the result being the same.

“I'm excited about this fight. It’s a fight in high demand,” Rosado said. “I respect Munguia as a fighter and I will bring my best and I am confident I will be victorious. My last fight I think will end up being ‘Knock-out of the Year,’ and I plan on making this upcoming bout ‘The Fight of the Year.’ Time to make history."