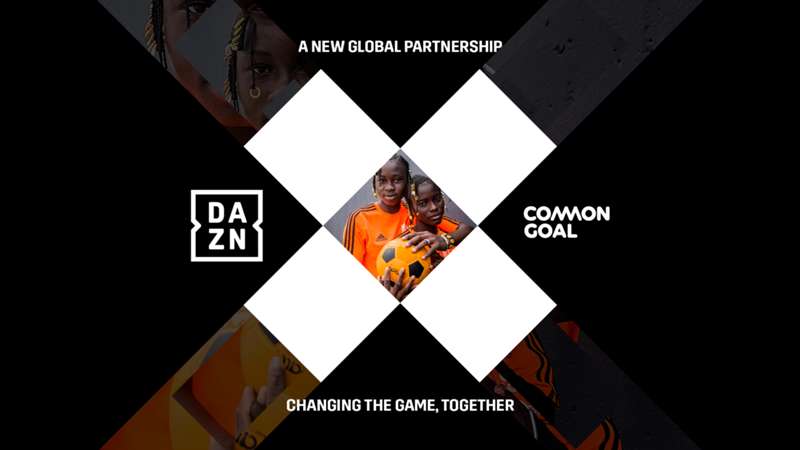 To drive long-term social impact around the most vital issues at the intersection of sport and society, DAZN joins Common Goal in a multi-year partnership to change the game – together.

Sports streaming platform DAZN and pledge-based social impact football movement Common Goal have united in a global partnership to jointly tackle some of the most vital issues of our times.

The partnership stems from a shared belief that sport can be a catalyst for social change as well as a deep-rooted “common goal” – a mission to drive long-term, solution-oriented change around critical issues at the intersection of sport and society.

DAZN is making a multi-million dollar pledge to Common Goal alongside a 1% global employee time and resource commitment in a long-term partnership that will collectively focus on three fundamental and deep-rooted issues, within and beyond football: gender equity, racial justice, and cultural diversity.

DAZN will foster open and meaningful dialogue around these three issues by leveraging the power of content and storytelling across its ecosystem of platforms, channels, and partners. The platform will also contribute towards action-oriented change via Common Goal’s own social impact initiatives and local community partners around the world, all with the goal of tangibly contributing towards levelling the playing field.

Over the next two years, this partnership will strategically and meaningfully utilize the resources and networks of both organizations to maximize impact beyond any individual effort.

"The Common Goal movement has shown that football can only fulfil its true potential as a force for positive change for people and planet when we work together. This groundbreaking partnership with DAZN is a celebration of a shared commitment to taking action right now," said Jürgen Griesbeck, CEO and co-founder of Common Goal.

"We look forward to getting to work on bringing the partnership to life and in doing so empowering girls, boys and young people around the world to fulfil their potential. We hope that DAZN's leadership inspires other industry stakeholders to join the Common Goal movement."

"It is brilliant to see the Common Goal movement, with now over 200 player and manager members, being embraced by DAZN, an important and innovative force in global sport," said Manchester United player Juan Mata, who co-founded Common Goal in 2017.

"Through this long-term partnership, DAZN is demonstrating its commitment to racial justice, gender equity and cultural diversity in a tangible and powerful way that will enable us to tell the stories of many player activists and young people around the world who are positively impacted by Common Goal."

“As a global broadcaster, media company, and industry disruptor, DAZN was not only born out of the desire to make sports accessible for all, we have also quickly grown to understand it is our responsibility to take action,” said James Rushton, Co-CEO of DAZN.

“Common Goal exists to unite the global football industry and tackle the greatest social challenges of our time, and we are committed to working hand in hand with them to change the game together.”

“At DAZN, we believe we can, and so, we must be a part of the ongoing solution. Together with Common Goal, we’ll collectively tackle the critical barriers of sports inequality in a way that aims to galvanize the football world and create lasting, equitable impact,” said Nancy Elder, Chief Communications Officer at DAZN whose role includes overseeing the company’s diversity, equity, and inclusion efforts.

“Building on the work done before us, and as we embark on what’s hopefully a long journey ahead, we are committed to using our global platform to drive positive social change in our communities and throughout the industry.”

As part of its pledge, DAZN has committed to leveraging its storytelling and creative expertise to examine the defined issues as they relate to sport, while showcasing solution-oriented goals and actions via co-branded and co-produced content with Common Goal. This content will leverage both partners’ global ecosystem of diverse and powerful voices in football, the wider sports community, and beyond.

"This partnership between Common Goal and DAZN will really help accelerate the positive change we want to see in football and society," said Chelsea FC star Pernille Harder. "We know that we can only achieve all that we strive for by working as a team and DAZN's partnership with Common Goal will enable the movement to scale its work driving LGBTQ+ inclusion, racial equity, and female empowerment."

In addition, DAZN has also pledged to directly support several dedicated Common Goal initiatives around the issues of gender equity, racial justice, and cultural diversity via a network of high-impact grassroots community organizations across the world, including a particular focus on those with presence in key DAZN markets. These initiatives will directly reach tens of thousands of individuals – all laddering up to Common Goal’s long-term goal of positively impacting 100 million young people by 2030 – and include:

This initiative ties directly to DAZN’s long-term mission of inspiring the next generation of players as part of its new global broadcasting deal with the UEFA Women’s Champions League, another multi-year partnership that will make the competition available on DAZN and free for the world to see on YouTube starting this season – giving the competition and players (dozens of whom are Common Goal members themselves) more visibility than ever before, marking a groundbreaking move to grow the sport.

Whether you’re a fellow broadcaster, media channel, federation, team, player, or fan, we welcome and invite you to visit www.common-goal.org and www.DAZNgroup.com to learn more, get in touch, and join the movement.