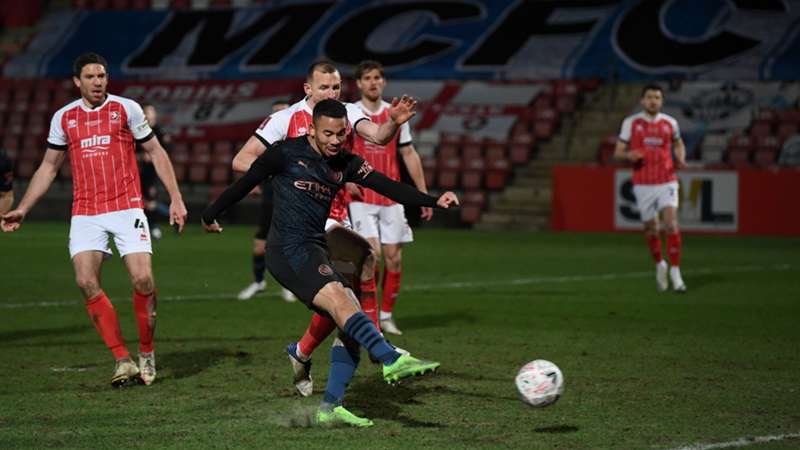 City required a late comeback to advance, while the Gunners will not retain their title after falling to the Saints.

It took moments of individual brilliance, but Manchester City defeated fourth-tier Cheltenham Town 3-1 in the fourth round of the FA Cup on Saturday.

The Sky Blues had to overcome a late deficit after Alfie May put the League Two side ahead in the 59th minute, the striker poking in a loose ball after a long throw in landed fortuitously at his feet just a couple of yards out.

The May goal added extra urgency among the City players, who had been stifled at every opportunity despite owning the lion's share of the possession and chances.

As the clock winded down, it felt as though one of the biggest upsets in recent memory would come to pass, but rapid-fire goals by Phil Foden and Gabriel Jesus in the 81st and 84th minutes, respectively, turned the match for the Premier League giants.

A stoppage time marker by Ferran Torres put the match out of reach, but Cheltenham had nothing to be ashamed of as the lower-league club took City to the brink.

Elsewhere, Arsenal fell to Southampton 1-0 on a first-half own goal by defender Gabriel, knocking the Gunners out of the competition that they won last season.

The other games went as expected, albeit with some spectacular goals sprinkled throughout.

DAZN News provided up-to-the-minute commentary of Saturday's action. Here's out how it all went down.

facebook twitter whatsapp
It's the expected result, but that was not a match to remember for Pep Guardiola's men.

It looked a shade offside, but the goal stands.

facebook twitter whatsapp
Phil Foden hits a soft volley into the net to finally get the Premier League giants on the board. It's 1-1 with under 10 minutes to play.

Perhaps unsurprisingly, the goal has increased the urgency level from the City players.

Will Cheltenham be able to withstand the inevitable onslaught?

Pep Guardiola is not happy. pic.twitter.com/5h2gnAx9ZG

facebook twitter whatsapp
Alfie May pokes it home after a long throw into the box bounces invitingly in front of goal.

facebook twitter whatsapp
Jesus is sent in alone and charges into the Cheltenham box. He hits a low, right-footed effort that curls around the onrushing 'keeper but strikes the outside of the far post.

The lower-league side has bent but not broken under pressure from the Premier League giant.

Despite literal fireworks stopping the match, there was little happening in the final third.

FIREWORKS IN THE FA CUP 🎇 pic.twitter.com/eeKt0pBvHt

facebook twitter whatsapp
City were within inches of scoring by a headed clearance keeps the match scoreless.

Next up: Cheltenham vs. Manchester City

facebook twitter whatsapp
The fourth-tier club is really up against it against the mighty (and red-hot) Sky Blues.

There wasn't much in the way of surprises during that batch of games, but the players still put on a show with some dazzling goals and unique celebrations.

facebook twitter whatsapp
A fortuitous deflection give Steven Alzate a long-range goal, and gives the Seagulls a 2-1 lead.