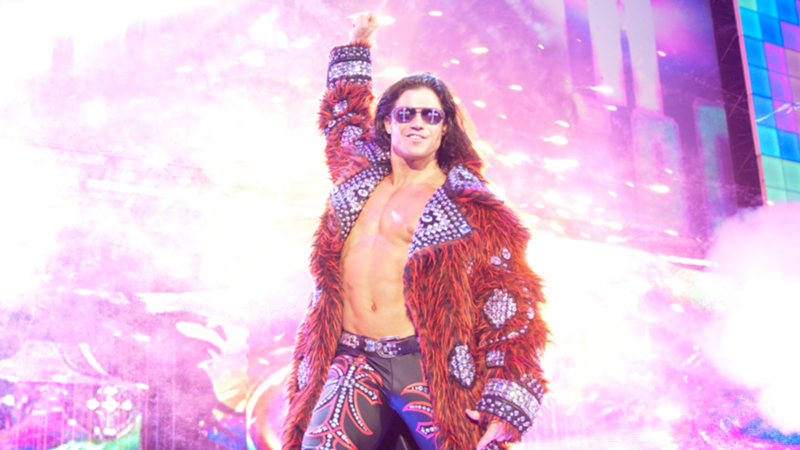 John Morrison is a fan of the 2021 edition of the Money in the Bank ladder match. And not just because he has now qualified.

When John Morrison announced in December 2019 that he'd be returning to WWE after an eight-year hiatus, fans felt they'd see the guy who improved tremendously since leaving the company and cemented himself as one of the best wrestlers in the world.

While he's enjoyed success in winning the SmackDown tag team titles with The Miz and appearing in a high-profile match at this year's WrestleMania 37 against music superstar Bad Bunny and Damian Priest, things haven't gone according to plan for Morrison supporters.

The tide has perhaps changed as Morrison pinned Randy Orton on last Monday's Raw to qualify for the Money in the Bank ladder match on July 18 from the Dickies Arena in Fort Worth, Texas in the company's first event with a full capacity crowd since March 2020.

Morrison took time to chat with DAZN about beating Orton, whether he's finally got some momentum, 'Johnny Drip Drip', and what it'd mean to win the MITB ladder match.

DAZN: Where did you get those Drip-Drip glasses, and where can I get them?

John Morrison: Okay, so start with the glasses. First of all, you're making the choice to be moist. I appreciate that. It's a good call. Second of all, these are still prototypes. I'm still working on perfecting the 'Johnny Drip Drip’ shades. A buddy of mine named Jim Agila made these for me. He lives in Los Angeles. I've got a couple of pairs. We've been refining the process until they're perfect, and when they are, we're planning on making a bunch or asking WWE to make a bunch.

DAZN: What name does your wife Franky Monet (NXT star) prefer: 'Johnny Drip Drip’ or ‘The Shaman of Sexy’?

DAZN: It would be pretty cool if you could walk around the house and just call yourself ‘The Shaman of Sexy’ or 'Johnny Drip Drip’. That wouldn't be too bad.

JM: (I can say), ‘Hey babe, ‘The Shaman’ is home’. That's not how you stay married. I think 'Johnny Drip Drip’ just grew on her. It actually started while we were in the car together when we were doing shows for Impact, and I started freestyle rapping to Cardi B. I don't know if you know this or not, but my freestyle rapping I like to do it, but I wouldn't say it's great. I'll put it that way.

But it evolved because then on our very first song that The Miz and I did, it was, ‘M-I-Z. Yo, Johnny Drip Drip’. And then it's just kind of taken on a life of its own. People are dry, and they're ready to get wet.

DAZN: How long did the music video take to do?

JM: The music video we shot in one day. Before you shoot a music video, you have to have your song done and recorded. Because what you're doing is you're lip singing to your own voice in the video. There's no way you can really sing live while you're recording a video if you're going to be cutting that fast. So for the whole process, maybe two months.

JM: I thought Monday's episode of Raw was one of the strongest episodes of Raw that I've seen in a very long time. You nailed it. Like Ricochet beats AJ (Styles), John Morrison beats Randy Orton, and Riddle beats Drew (McIntyre). Nobody saw any of those coming. I think that sometimes is what wrestling needs is a little bit more unpredictability, a little more uncertainty.

For me, there's the known and the unknown, and in between are the doors, which by the way, is why The Doors named their group The Doors. Support my namesake, Jim Morrison. But when you're in the unknown, it's more interesting because anything can happen. If you always know, AJ is going to beat Ricochet. If you know that going in, then suddenly, instead of like, ‘I want to see what's going to happen’. You're like, ‘Okay, let's see how AJ beats Ricochet’. It's more of a passive viewing experience, and that's why I think this week was so cool.

For me, I mean, Randy, someone that I've known for 19 years and always consider him a friend. We were talking, and I think that's the first time that we've wrestled. We've been in the rings together plenty, but we've usually been on the same side. It was cool being in the ring with him. It was great having that match with him. His pacing is next level, and the way he thinks about everything is all very methodical, all about the story, all about conveying emotion through your face, and that can be understood by the people watching, which is really what it's all about.

The whole point of entertainment is to make someone feel something good, bad, excited, interested, and curious. So for all those reasons, it felt like I came away with a lot of ideas and excitement about the future after that match.

Three huge upsets on #WWERaw lead to three huge opportunities at #MITB as @KingRicochet, @TheRealMorrison & @SuperKingofBros all qualified for the Money in the Bank #LadderMatch!https://t.co/y4a6xuNTOi

DAZN: Since you've come back (to WWE in 2019), many fans thought they were going to get what they saw when you were in Impact and the various places on the independents. Do you feel like now, with this match, you're going to get the chance to show the world what they didn't see while you were gone?

JM: I hope so. A lot of fans thought that they were going to see what they saw on Impact, Lucha Underground, and all the places that I was at. That's what I thought too, and that's what I've been wanting to do since I've been back. It feels like I'm in a unique position right now to showcase everything I'm capable of, not just physically in the ring, but promo-wise, charisma-wise. I feel like I pitch an idea every week. Some of them are dumb; some aren’t. I laughed a lot about dipsticks because I loved that idea. I think ‘Hurricane’ (Helms) sent me a tweet that said WWE just trademarked ‘drip drip stick’. They want to do crypto drip. I pitched that for two months. That fits so many things.

With everything that is going on right now, I am very optimistic and hopeful that I'll get the chance to show what I can do. It's a strange thing to think that everyone is best at something, right? It's really fulfilling and enjoying to do the thing that you're best at, to your best capability. For me, that's wrestling. It always has been. I feel like I'm better now than I've ever been. I haven't really had the chance on my own to do what I see in my head is possible. This feels like that chance.

DAZN: What would it mean to you to win the Money in the Bank ladder match on July 18?

JM: It's hard to put that into words. But think of it this way. You get out of something, what you put into it. And I've put pretty much my entire life into this business. So winning that briefcase would mean a lot.