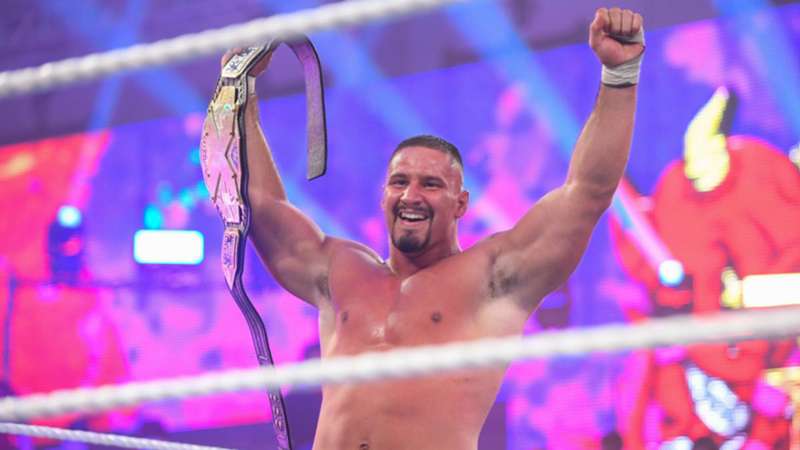 Bronson Rechsteiner has been around wrestling his entire life. His father, Rick, was one of the best tag team wrestlers of all-time. Rick teamed with his brother, Scott, to form The Steiner Brothers. The duo became the WWE and WCW tag team champions. Scott was a WCW and United States Heavyweight champion.

Bronson, though, went the football route. He signed with the NFL's Baltimore Ravens as an undrafted free agent fullback. But he got released in August 2020. Instead of trying to latch onto another team, Bronson decided to enter the family business.

Last February, Bronson signed with WWE and off he went. He made his debut in September under the name Bron Breakker. The 24-year-old hasn't looked back. On Tuesday night, Breakker defeated Tommaso Ciampa to capture the NXT Heavyweight title.

Days after winning the belt, Breakker talked with DAZN News about winning the gold, having his dad at the match, family legacy, and the influence of Shawn Michaels and The Undertaker.

DAZN: How does it feel to be called NXT Heavyweight champion of the world?

Bron Breakker: It's a dream come true. I couldn't be more thankful just to be a part of this organization, be a part of WWE. (I’m) thankful for the fans, WWE Universe is just an unbelievable moment for me.

DAZN: You're 24 years old. I think of 24-year-olds, and they don't reach the success you have that quickly. You look at combat sports, and it's only a select few. You got guys like Brock Lesnar, Randy Orton, Mike Tyson, Jon Jones. It's rarefied air to be that young and be put in such a high-profile position. How have you prepared yourself for this moment because you came in and you got shot to the moon and done very well in a short amount of time?

BB: I think it just comes down to how I was raised. My entire life, there's always been a high expectation for me and a high bar for me to obtain this because I'm Rick Steiner’s son. It's been that way my whole life in athletics and in school. No matter what I'm doing. Anything that I'm doing has got to be above and beyond. It's the standard, so it's been that way forever. I'm used to it. I treat it as a challenge and anything that gets put in front of me that nobody thinks I could do and nobody thinks I can achieve or think it's too high. And then I go after it. I just accept the challenge.

DAZN: Do you feel that you always felt that chip on your shoulder since you were young, or do you just try to block all that out and what the people are saying and just focus on what's ahead?

BB: I'm a little bit of both. I'm a very focused person. I do put the blinders on and just lock in and focus on my job and everything. But I do have a chip on my shoulder, and it's been that way my entire life, pretty much in athletics. I've always been aggressive and just violent. I love the physicality, and I'm in the right business for it. I love this. I love this sport, and I love this company.

DAZN: Was it always wrestling, though? Because you were a football player, you could have continued that route. You could have gone the MMA route. Was it just because of what your dad and uncle did in wrestling and the natural path, or was there a different route you could have possibly gone?

BB: Obviously, I was in the locker room with my dad and stuff as a kid. My first real thing that got me into wrestling was maybe 12, 13-years-old and WrestleMania 27 was in Atlanta, which is where I live. I think my brother and dad went to the show, and they came back with a cup with the poster of the card on it and Triple H on the front. I remember looking at Triple H and was like, ‘Who the hell is this guy? He's huge.’ I remember looking him up, and then I just started watching him and the show every week from there on out.

DAZN: I don't know if he's fully back yet with you guys at all and everything, but did you get a chance to talk to Triple H after the match?

BB: No, I haven't. I talked to him briefly when I first got here. That's really it. I haven't really had much discussion with him.

DAZN: How much help has Shawn Michaels been to your growth because he has been running the ship since Triple H has been dealing with his health issues?

BB: Shawn has been unbelievable. He's freaking awesome. I can't say enough good things about him and the leadership that he's imposed and the role that he stepped into. He's fantastic. I love showing up to work every day. I get to freaking work for Shawn Michaels. It’s freaking nuts (laughs).

DAZN: How much time do you study because, as you said, you've only had a short time in the business?

BB: I watch a lot of Goldberg. Watch a lot of Steve Austin. I'm watching my dad and uncle a lot as well. But here recently, I've been watching a lot of The Undertaker, and some of his WrestleMania matches over again. I love the matches and everything, but it's more for educational purposes, and I'm trying to study and see what they're doing and just watch these professionals, veterans of the game. These guys are the best of the best. Anytime I can go back and watch tape and figure out what these guys are doing and anything I can pick up on to make me better, I'm going to do it.

DAZN: What did you learn from watching some of those matches of The Undertaker?

BB: He takes his time. He makes moments out of things. He's very methodical. He's so damn good. He's got this ability, and it draws your attention, your undivided attention. Now we have social media. We have cell phones. We have internet. We have all this stuff that can draw your attention and stuff. But when he's on the screen, he's just got this undeniable all eyes are on him, watching him the whole time he's in his entrance, in the ring, anything he's doing. He's freaking one of the best ever, if not the best ever. He's unbelievable.

DAZN: I thought a cool moment after the show is your dad got in the ring. I could see in your face how much that meant to you. How much did it mean just to you to have your dad there and see you win in your most significant moment to date?

BB: It was awesome. It's a moment that I'll never forget. It's just huge. It's the first time he's ever seen me perform. So it was cool, and I'll never forget that. That's going to be something a picture that goes on the wall in my house. It was cool. It was a surreal moment.

DAZN: I do want to ask you about Tommaso. The chemistry is so good between you guys, and you've only been into business a short amount of time, and he's been in business 15 years-plus. How much has it meant to work with Tommaso Ciampa, and how has he helped you grow as a performance?

BB: It's meant the world to me. Tommaso Ciampa is a phenomenal human being. He's a phenomenal performer. He's one of, if not the best sports entertainer to ever step foot in an NXT ring. That's a fact. I have the utmost respect for him. He's taught me so many things about just life, about this business. He's nothing but a stand-up professional. He's a leader in this locker room. He's a leader of this brand. He is a fantastic person. I cannot say enough good things about him. I have the utmost respect in the world for Tommaso Ciampa.

DAZN: Do you feel like you came out of your uncle and dad’s shadow with winning the title?

BB: Yeah, I would like to say that I'm on my own way. I do some things that are similar to them. He’s my dad. Things are gonna be similar. He’s my dad (laughs). They're my family. It's more of me paying tribute to them and paying my respects because they laid the groundwork for me. They paved the way, and it's my job to pay my respects as a young guy and as my dad's son to make him proud and to make my uncle proud and to be respectful and carry on what they've laid for me and make my own way.