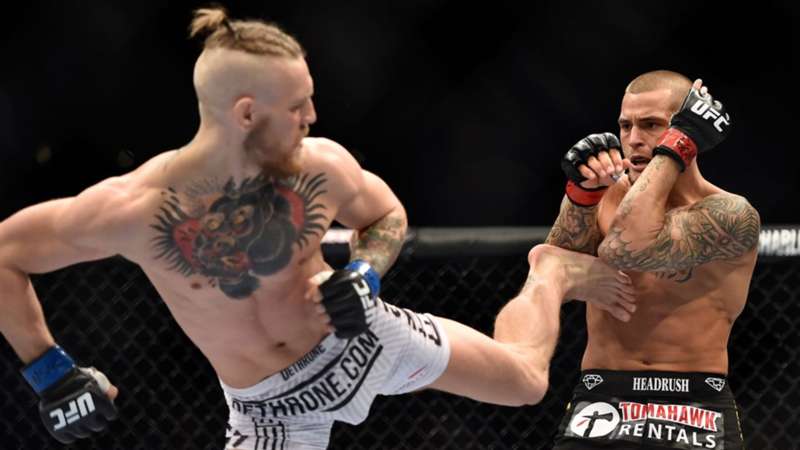 Dustin Poirier will be hoping to make his rematch against Conor McGregor considerably more competitive.

UFC stages its first major event of 2021 on Saturday, Jan. 23, when Dustin Poirier faces off with Conor McGregor in a ranked lightweight main event. However, it won't be the first time the two have done battle.

This will be a rematch from 2014, with the Irishman handily winning the initial encounter. Both combatants are much different and far more experienced these days, and the contest should be a treat for fight fans.

As we count down to fight night, let's take a trip down memory lane to re-live their first bout.

WHEN WAS MCGREGOR VS. POIRIER 1?

"The Diamond" and "The Notorious" first fought on Sept. 27, 2014, on the main card of the UFC 178 pay-per-view event, headlined by Demetrious Johnson's second-round submission victory over Chris Cariaso to retain the UFC flyweight title.

WHERE DID MCGREGOR VS. POIRIER 1 TAKE PLACE?

WHAT HAPPENED IN THE FIRST FIGHT?

McGregor, by this stage gaining plenty of momentum as a future star, was more fluid and alert from the very beginning of this three-round featherweight contest. Poirier's footwork was basic and predictable as he attempted to figure out his adversary, but he wouldn't be given the opportunity to take Conor to the mat.

After keeping the American on his toes with a couple of early spin kicks and evading a telegraphed Poirier uppercut, McGregor dropped his opponent with a punch before quickly pouncing for more offense to force the official to call it off. The bout lasted just one minute and 46 seconds.

CAN I WATCH THE FIRST FIGHT?

UFC recently uploaded the fight in full to their official YouTube channel as part of the build-up to the rematch. You can check it out below (warning: geo-restrictions may apply):

McGregor earned co-Performance Of The Night honours for the swift victory, alongside Dominick Cruz who stopped Japanese bantamweight Takeya Mizugaki in even less time (1:01) at the top of the preliminary card.

Not only was this regarded as one of McGregor's pivotal fights on the road to superstardom, but his growing reputation and mass appeal actually served to support the main event of Johnson vs. Cariaso, with the long-reigning flyweight champ regarded as superbly skilled but underwhelming as a box office draw. "Mighty Mouse" was moved onto the card at the last minute when two planned Jon Jones fights fell through.

"I don't just knock them out, I pick the round," said McGregor upon winning his 12th straight fight and moving to 4-0 in the UFC. "What the other featherweights don't understand, is that it's a whole ‘nother game when they get hit by me. The world title is next."

The world title would come the following year when he became interim featherweight champ against Chad Mendes before swatting Jose Aldo away in just 13 seconds to unify the full title. Poirier, meanwhile, took the loss to McGregor pretty hard.

CAN POIRIER GAIN REVENGE ON MCGREGOR?

This time around, the two are not only older and more experienced but will fight in the feature attraction (though some will argue that McGregor was indeed the main reason to watch UFC 178). It will also take place at lightweight as opposed to featherweight, and is scheduled for five rounds instead of three.

The first time they fought, Poirier and McGregor engaged in plenty of trash-talk prior to entering the Octagon, which added a level of animosity to the contest. This time, the two are on far better terms — in fact the fight came about after they discussed running it back purely for charity, until UFC President Dana White reminded the duo they were still under contract and worked out a compromise.

To many, the key to Poirier making this fight completely different to the first is finding a way to finally get McGregor on the ground. If he can do that, it will be a completely different proposition to the 2014 meeting. Nonetheless, McGregor heads into this a heavy favourite to score another first-round knockout.