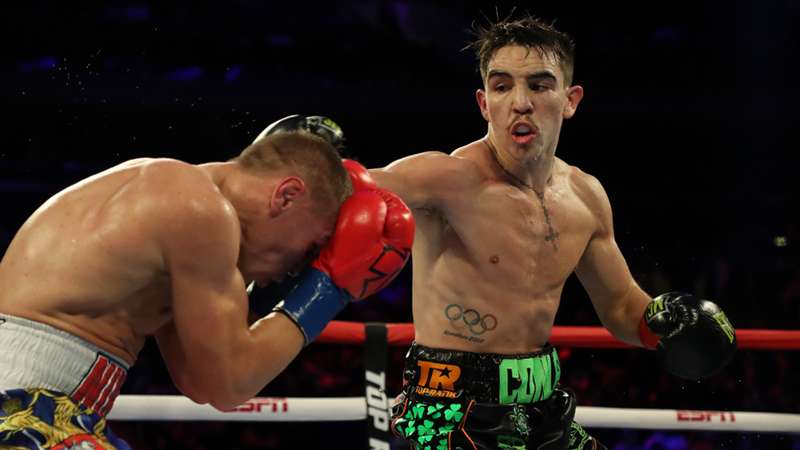 Andy Lee is a fighter fully aware of what it means to transfer amateur success into professional glory with Irish fight fans banking on him. After representing his country at the 2004 Olympics, Lee embarked on a pro journey that brought many memorable nights as well as the WBO world middleweight title. On Saturday night, live exclusively on DAZN, Michael Conlan can transfer his vested pedigree to the highest level in the paid code.

Facing Leigh Wood for the WBA featherweight belt, Conlan, a darling of Irish boxing due to incredible success at various amateur tournaments, can replicate Lee’s world title achievement. Conlan enters the fight against Wood a slight favourite, and Lee, a huge admirer of the 2015 World amateur champion, believes that Conlan has been groomed for this moment.

“With Mick, we’ve known for a long time that he was going to be a superstar,” said Lee when speaking with DAZN.

“What he did when representing Ireland across many tournaments, including the Olympic Games, was pretty special. The path he has been put on comes with so much pressure, but he’s responded like a true champion every single time.

"He’ll have to do that against Leigh Wood, but this is a fight that he always knew he was going to have to take at some point.

“Look what he’s done in the sport already. So many medals as an amateur. A big deal with Top Rank that saw him on big shows in America. He’s headlined his own shows in Belfast. Believe me, that all comes with a big deal of pressure, and he’s handled it in such a good manner. Saturday is a big opportunity for him, but the occasion won’t get the better of him. He’ll handle it fine.”

Waiting for Conlan at the Nottingham Arena is a fighter in good form. Despite falling short against Liverpool’s Jazza Dickens in 2020, Wood has rebounded well to register excellent wins that have seen him become world champion. His upset win over Xu Can last summer sent shockwaves through the featherweight division, and Lee believes that he’ll provide Conlan with his sternest test to date.

“It’s a hard fight for both men. A proper 50/50, but Mick will be happy with that. To get your first world title shot and it’s split right down the middle, that’s a good place to be.

"He’s not entering the fight a huge underdog who’s got it all to do. I like both men as fighters.

"Leigh impressed me with his last performance, but Mick can be special. Saturday night is the time he can prove it.”