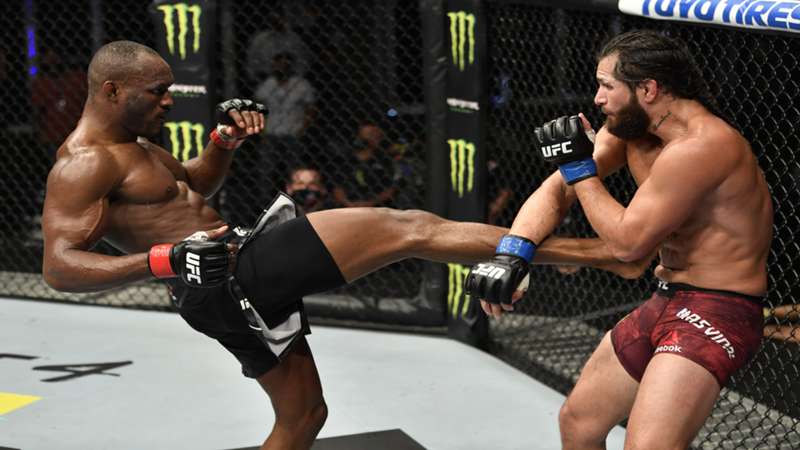 Kamaru Usman and Jorge Masvidal run it back for the welterweight championship on Saturday at a stacked UFC 261.

The UFC returns for their first event with live fans in over 13 months at Saturday's UFC 261 from the VyStar Veterans Memorial Arena in Jacksonville, Florida.

They are giving the soldout crowd their monies worth as the card features three championship fights, headlined by rivals Kamaru Usman and Jorge Masvidal, meeting once again for Usman's welterweight championship.

Usman and Masvidal met a little less than ten months ago at UFC 251, with the former retaining his title via unanimous decision. Masvidal took the fight on less than a week's notice after Gilbert Burns tested positive for COVID-19. In the aftermath of UFC 251, Masvidal felt if he had more time to prepare and get in a full training camp, the result would have gone differently.

It appeared a rematch wasn't going to be in the cards as Usman had stopped Burns in the third round at UFC 258 on Feb. 13 and Masvidal looked to be heading towards a fight with Colby Covington. Everything changed when Usman called out Masvidal to run it back. Masvidal wanted it and, most importantly, UFC president Dana White. If the UFC was going to fans return at total capacity, White wanted to give them their bang for the buck. While Masvidal feels Usman only wanted to face him because he's perhaps the biggest draw outside of Conor McGregor since UFC 251 did a reported 1.3 million pay-per-view buys, the champion doesn't fully agree with that sentiment.

"There's truth, and there's not truth in that," Usman told ESPN recently. "You can't say you are the star, and that's who I want to be. That's wrong because I have what everyone in the world wants, so you can't say that. Of course, does he bring more eyes right now? Absolutely. I'm a realist. I've always been a realist. Absolutely he brings more eyes right now. If I look at all the pools of guys I've been through all of them, now I'm just lapping them all. If we're running a race right now, I'm lapping everybody right now. He's the first guy, so he's dead last right now, the first guy I'm about to lap. I'm lapping him.

"So yeah, does he bring a little bit more eyes? Absolutely. I don't take that away from him. I'm proud of everything he has done, absolutely proud of him. Respect in that aspect but let's be honest, I have what everyone wants. It's green panty night when you fight me. He's not getting the pay-per-views and stuff like that on his own. He has to fight me."

For Masvidal, he feels that since he'll have the necessary time to train and cut weight properly, he will win UFC gold for the first time and go right into a trilogy clash with Usman.

"When I win the rematch, we definitely will go for the trilogy," Masvidal said in a recent Q&A for ESPN+ subscribers. "I will not go down in history 1-1 with this individual. It's just not going to happen.

"I'm not gonna cut 20 pounds of weight—mainly water—in six days [this time]," Masvidal said about the rematch. "Right now, I'm eight, nine pounds before I hit the mark of 170, so it's a different cut altogether. That will be the determining factor, I think."

UFC 261 is the most loaded for the company to date in 2021. Can Usman prove the first time around was no fluke? Or does Masvidal show that it was?

Here is everything you need to know about UFC 261: Kamaru Usman vs. Jorge Masvidal 2.

UFC 261: Kamaru Usman vs. Jorge Masvidal 2 takes place on Saturday with the early prelims kicking the event off at 6:00 p.m. ET, before the pay-per-view main card begins at 10 p.m. ET. Usman and Masvidal should enter the Octagon at around 12:15 a.m. ET, depending on the length of the undercard bouts.

In the United States, the PPV price for UFC 261 for current ESPN+ subscribers is $69.99. New subscribers have the option of bundling an annual ESPN+ subscription and the fight for $89.98. The first half of the preliminary card can be seen on ESPN+ at 6:00 p.m. ET before switching over to ESPN at 8 p.m. ET.

The card will be held at the VyStar Veterans Memorial Arena in Jacksonville, Florida. This will be the first UFC event in the United States since UFC 248 in March 2020 that a full capacity will be inside a facility. Usman and Masvidal compete at the venue for the first time.