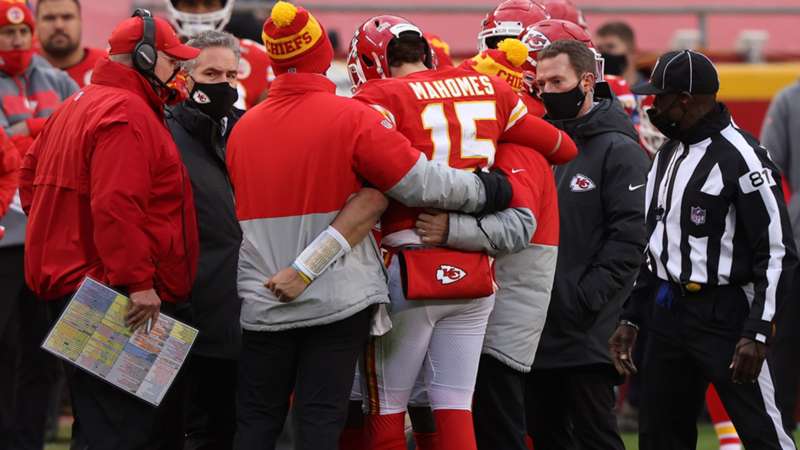 There's no set timetable for the 25-year-old's return.

Kansas City Chiefs fans can be forgiven for holding their collective breath when star quarterback Patrick Mahomes went down with an apparent concussion midway through the third quarter of Sunday's 22-17 Divisional Round victory over the Cleveland Browns.

The Browns were mounting a comeback, and Mahomes is the best weapon the Chiefs — heck, any NFL team — have at their disposal. So Chiefs fans were forced to hold out hope that 35-year-old backup Chad Henne could hold the fort while Mahomes underwent concussion testing in the bowels on Arrowhead Stadium.

As it turns out, Henne was up to the task. It's a good thing, too — Mahomes was confirmed to have entered concussion protocol and did not return to the game.

Now Kansas City football fans will be holding their proverbial breath for much longer as the Chiefs try to get Mahomes ready to play against the Buffalo Bills in the AFC Championship game on Jan. 24.

Whether the 25-year-old superstar returns to the field on the weekend isn't up to the Chiefs, or even Mahomes himself. The NFL has a five-step concussion protocol that Mahomes will have to navigate before being cleared to play successfully, and there's no guarantee that he'll satisfy the requirements in the short amount of time required.

When will Patrick Mahomes return?

Mahomes will have to complete the league's five-step protocol before receiving clearance to play.

He underwent an evaluation on Monday, after which he'll begin the five steps. Upon completion, he'll require clearance from team doctors and an independent neurologist before being allowed back on the field.

THURSDAY UPDATE: Mahomes fully participated in Chiefs practice on Wednesday, which indicates that he's progressing through the required steps.

SATURDAY UPDATE: Mahomes told reporters on Friday that he has cleared the concussion protocol and will be playing against the Bills.

"The week has been a bunch of testing, a bunch of different things, to make sure I'm good to go and there's no lingering effects and things like that," Mahomes said, as reported by AP. "Everything has been good. I went through everything; three or four different doctors have said everything is looking good."

The steps (listed as "phases" on the NFL's website) are as follows:

The player is prescribed rest, limiting or, if necessary, avoiding activities (both physical and cognitive), increasing or aggravating symptoms. Under athletic training staff supervision, limited stretching and balance training can be introduced, progressing to light aerobic exercise, all as tolerated.

Under direct oversight of the team’s medical staff, the player should begin graduated cardiovascular exercise and engage in dynamic stretching and balance training. Neurocognitive and balance testing can be administered after completion of Phase Two, and the results should be interpreted as back to baseline.

The player continues with supervised cardiovascular exercises that are increased and may mimic sport-specific activities, and supervised strength training is introduced. The player can practice with the team in sport-specific exercise for 30 minutes or less with ongoing and careful monitoring.

The player continues cardiovascular, strength, and balance training, team-based sport-specific exercise, and participates in non-contact football activities (e.g., throwing, catching, running, and other position-specific activities). Neurocognitive and balance testing should be completed no later than the end of Phase Four, with the results interpreted as back to baseline.

Upon clearance by the Club physician for full football activity involving contact, the player must be examined by the Independent Neurological Consultant (INC) assigned to his Club. If the INC concurs with the Club physician that the player’s concussion has resolved, he may participate in his Club’s next practice or game.

Before Sunday, Mahomes has had one concussion in his college and NFL career. The QB suffered the injury in 2014 when he was starring for Texas Tech, and — like in Sunday's Divisional Round game — he did not finish the game.

A bit of scheduling luck saw Texas Tech with a bye week immediately after that, so Mahomes had 14 days to overcome the injury. When the Red Raiders returned to the field, so did Mahomes.