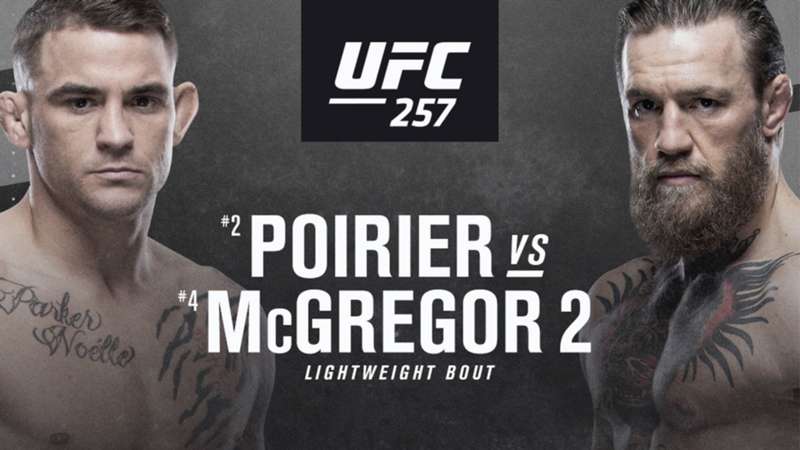 'The Notorious' and 'The Diamond' will do it one more time, seven years on from their first clash.

The eagerly anticipated return to the Octagon of Conor McGregor will be against a familiar foe in the form of Dustin Poirier in the main event of UFC 257 from Etihad Arena in Yas Island, Abu Dhabi.

Ireland's McGregor required less than two minutes to finish Poirier on Sept. 27, 2014, at UFC 178. McGregor launched into superstardom in the years following that, including becoming a dual UFC champion and venturing into boxing against the legendary Floyd Mayweather. In his last time, McGregor blasted through Donald Cerrone in 40 seconds at UFC 246 last January.

Poirier has also improved and matured as a fighter, including a spell as interim UFC lightweight champion. After losing a title unification bout against current lightweight titlist, Khabib Nurmagomedov, Poirier beat Dan Hooker at the end of June in a fight of the year contender.

Now, after a series of respectful exchanges on social media discussing a possible charity fight in Dublin, the two will run it back on 'Fight Island' in the company's first PPV offering of 2021.

Can Poirier exact some revenge on his brash 'frenemy'? Or will 'The Notorious One' fulfil his promise to defeat 'The Diamond' even quicker this time around?

Here's everything you need to know about watching UFC 257: Poirier vs. McGregor 2.

UFC 256: Poirier vs. McGregor 2 takes place on Saturday with the early prelims kicking the event off at 6:15 p.m. ET, before the pay-per-view main card begins at 10 p.m. ET. Poirier and McGregor should enter the Octagon at around 12:15 a.m. ET, pending on the length of the undercard bouts.

Meanwhile, British fight fans can watch the event with a subscription to BT Sport. The early prelims will be shown on UFC’s Fight Pass for subscribers, as always.

WHERE IS THE MCGREGOR VS. POIRIER FIGHT?

The card will be held on Yas Island in Abu Dhabi, also known as 'Fight Island' for UFC shows. Yas Island is a tourist destination and the events take place at the Flash Forum with no audience, due to current COVID-19 protocol. The fighters are confined to their hotel rooms until they have passed COVID-19 testing.