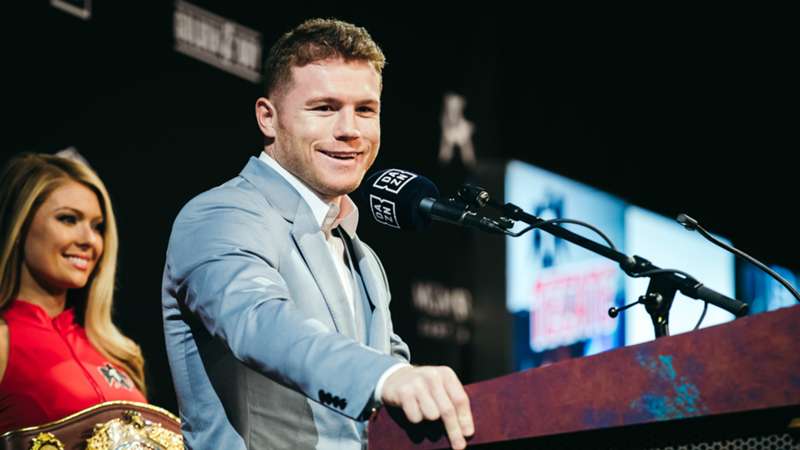 Errol Spence Jr. would have to move up the weight classes to meet Alvarez, but everyone involved has now expressed an interest in that happening one day.

The next opponent for Saul "Canelo" Alvarez is one of boxing's biggest talking points at present, and while Callum Smith is a name that has circulated in media reports, the Mexican superstar's trainer Eddy Reynoso has publicly approved of two intriguing possibilities for 2021.

One of those names is WBC middleweight champion Jermall Charlo, the man who earned the title previously held by Alvarez until the WBC elevated him to their "Franchise champion" status in 2019.

Because of that, Reynoso likes the idea of Canelo and Charlo getting it on one day.

“Canelo vs. Charlo is a good fight," he said in an interview with Little Giant Boxing.

"Charlo has a lot of qualities, he’s spectacular, tall for the division, strong, and has good boxing skills."

The more eye-catching of the two fighters discussed, however, was Errol Spence Jr.

Spence is the current IBF welterweight champion, meaning the undefeated American would need to mirror the man he defeated for the title, Kell Brook, and jump up in weight for the showdown with Alvarez the same way Brook did to lose to Gennadiy Golovkin in 2016.

“Spence vs Canelo would be interesting, the only difficult thing is the weight class. Canelo is now fighting at 168 pounds, Spence would have to move up,” Reynoso said, before refusing to rule it out.

“It’s a fight that could be made, but we have to work toward it, so fighters like Spence can start to move up to 160 pounds and Canelo (back down) to 160 pounds.

"It’s almost been a year since Canelo has fought, we can’t just move down to 160 pounds, we have to work toward that weight.

"Sooner or later those fights have to happen, we just have to stay in the gym and keep working.”

Spence himself had admitted to an interest in one day battling Alvarez in what would be a bona fide megafight, if Alvarez did ever return to 160 lb from 168 lb, which at present appears unlikely.

"That would be a big fight," said Spence to Brian Custer on The Last Stand Podcast in early November.

"I don’t know when that fight would happen. I mean it’s up to the guys in the suits, Al (Haymon) and all of them.

"I wouldn’t step on Jermall’s toes or [his twin brother] Jermell’s toes because I know Jermall has been yearning for that fight for a long time. I know Jermell has been wanting that fight, too.

"I would let my guy Jermall get that fight first before I step on his toes and get that fight, but if that’s the fight he can’t get and I can get it, I would definitely take that fight.”

It is likely Canelo will fight someone else first to get back to competition for the first time since the COVID-19 pandemic shut live boxing down for several months.

Eddie Hearn, promoter of WBA super-middleweight champion Smith, recently revealed that talks were taking place for the Brit to be Alvarez's opponent.

"The last three nights have been 3am jobs for me because Team Canelo are eight hours behind on the East Coast in the US," said Hearn to the BBC. "The negotiations are ongoing for that fight.

"It would be an honour for a fighter I have represented from his professional debut and a great young man in Callum Smith to get this opportunity to fight a pound-for-pound great.

"We are hopeful that fight can be delivered in late December in a difficult environment.

"Canelo is used to generating millions and millions of dollars on the gate and that is now virtually non-existent. It's difficult times to get these deals moving but there is definite interest from Alvarez and Smith to get that deal over the line."