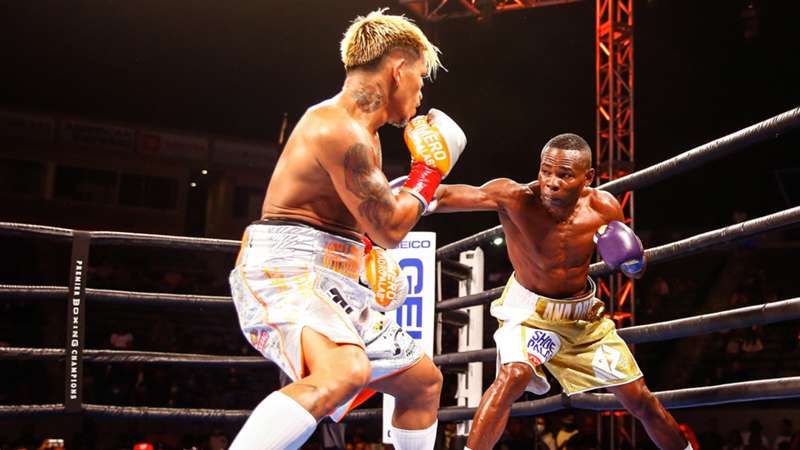 Casimero held onto the WBO world bantamweight championship but it was far from pretty.

While the constant movement stifled Casimero to only landing 47 punches, Rigondeaux didn't do enough to seize the moment either, connecting on 44 punches himself. By the end of the bout, judges scored it 117-111, 116-112, and 113-115 toward a split decision for Casimero, who retained his WBO bantamweight world title at the Dignity Health Sports Park in Carson, Calif. on Saturday night.

The champ stays the champ ⭐ @casimerojr defends his belt with a split decision W over Rigondeaux. #RigondeauxCasimero pic.twitter.com/YzRxVQlMTZ

There's no doubt that Rigondeaux goaded Casimero into fighting his style of fight. The champ dropped his gloves out of frustration, begging the Cuban veteran to engage and fight several times in the bout to no avail.

While one could marvel that the 40-year-old Rigondeaux could maintain that kind of fitness to constantly move around the ring for 12 rounds, he didn't bother engaging at all.

At the same time, Rigondeaux's movement put Casimero in constant pursuit as the champion swung and missed plenty in this fight. Rigondeaux connecting on counterpunches made the champ think twice about pressing the action further, and that led to an even lower action performance.

Aside from arguably stunning Rigondeaux with a short right hand and having a knockdown waved off by the ref as a slip in the opening round, the champion's explosive power was never uncorked. Rigondeaux snapped the champ's head back with counterpunches a few times but never tried to capitalize on the moments.

"God gave me those skills, and that's how I display them," Rigondeaux said defending his performance and constant movement.

The lackluster affair, which was serenaded by boos from the Carson, Calif. crowd could have gone either way, though DAZN News scored it a 114-114 draw.

What he lacked in performance, Casimero made up for by calling out WBC bantamweight champion Nonito Donaire and unified world champ Naoya Inoue, giving the middle finger to the latter.

Here's how the entire card went.

facebook twitter whatsapp
Judges have it 115-113 for Rigondeaux, 116-112 for Casimero and 117-111 for Casimero, who remains WBO world bantamweight champion in a lackluster affair.

facebook twitter whatsapp
Rigondeaux opens with a straight left hand that connects flush. He counters and connects against the champ. Casimero in pursuit but coming up empty quite a bit. Casimero gestures to his chin, daring Rigondeaux to hit him. Rigondeaux doesn't oblige. This bout can really go either way. We have it as a draw. (10-9 Rigondeaux, 114-114)

facebook twitter whatsapp
The boos continue here as Rigondeaux keeps his movement going. On one hand, it's astonishing that a 40-year-old Rigondeaux is able to keep moving like this so deep into the fight. But he's not doing enough to seize this fight and due to his constant movement, is also limiting Casimero's output. So, he is certainly making the champ fight his style of fight, but can still lose. A very hard round to score. (10-9 Rigondeaux, 105-104 Casimero)

facebook twitter whatsapp
Rigondeaux's style has thoroughly frustrated Casimero, but the champ seems to be up. Casimero explodes forward, lands and actually gets greeted with an instant exchange for possibly the first time in this fight. Rigondeaux doubles up on the jab. Solid left lands for Rigondeaux during the waning seconds. (10-9 Rigondeaux, 96-94 Casimero)

facebook twitter whatsapp
Casimero digs into Rigondeaux's body with a right before going upstairs with a lunging left. Left hand lands for Casimero. Lunging right connects for the champ, too. Being relentless with pressure can be one way to slow Rigondeaux down. Casimero with a stinging body shot on a right hand. (10-9 Casimero, 87-84 Casimero)

facebook twitter whatsapp
Casimero trying to invest to the body, opens with a right to the midsection. He pressures and lands a left hook to the body and the same shot upstairs. Rigondeaux not letting much else touch him, laterally moving to his left, sharply switching to his right. Rigondeaux snaps Casimero's head back with a counter left hand while moving. Casimero again drops his gloves. Double left hook from Casimero. This round could have gone either way. (10-9 Casimero, 77-75 Casimero)

facebook twitter whatsapp
A very hard fight to score due to Rigondeaux's style. He's making this a bout of low offensive output. Casimero drops his gloves with about a minute left basically asking Rigondeaux if he's there to fight or not. Rigondeaux drops his gloves to as if to say he's standing right there and come and get him. He chases and lands a right to the body and another, though the second one had him greeted with a counter right instantly. Still, low action, though, due to Rigondeaux's constant movement. Another hard round to score. (10-9 Casimero, 67-66 Casimero)

facebook twitter whatsapp
Rigondeaux counters while on his bike but Casimero lands a body shot in the process as well. Rigondeaux sticks in a shrewd left but Casimero bounces him off the ropes with a right. Counter left moments later from Rigondeaux lands. Rigondeaux mocks Casimero by pumping a jab after the bell. Halfway through, Rigondeaux has certainly frustrated Casimero but he must do more than dance. (10-9 Rigondeaux, 57-57)

facebook twitter whatsapp
Casimero chasing Rigondeaux around the ring and lands a couple of rights for his pursuit. The champ literally has his right hand cocked back as he pressures a bicycling Rigondeaux around the ring. Casimero has to take more chances. Casimero is certainly trying to increase the pressure and unleash the aggression. (10-9 Casimero, 48-47 Casimero)

facebook twitter whatsapp
Casimero back to pressing, stalking a moving Rigondeaux around the ring. Rigondeaux punching and connecting while dancing around the ring backwards. Slick boxing from the Cuban. The crowd is booing, wanting to see more action. Casimero has to go to the body to slow Rigondeaux's wheels. The champ grazes Rigondeaux with a combination. A low action round due to Rigondeaux's movement. (10-9 Rigondeaux, 29-28 Rigondeaux)

facebook twitter whatsapp
Casimero on the hunt but Rigondeaux with a sniping left that finds its mark. Another big straight left from Rigondeaux connects. Now, Casimero seems to be thinking about pressing. Rigondeaux counters with a left to the midsection but Casimero responds moments later with a left and right. Rigondeaux is moving around the ring strategically and it's frustrating Casimero, who drops his hands in the waning seconds as if to say 'let's fight.' (10-9 Rigondeaux, 19-19)

facebook twitter whatsapp
Rigondeaux flicking out that jab, while Casimero already unleashing power shots. The champ is missing but that's not going to deter him from letting his hands fly. Casimero catches Rigondeaux with a short left hook. The champ catches him with a right and Rigondeaux looks stunned. Rigondeaux falls, but the ref declares that it's not a knockdown. Rigondeaux signals that he was hit behind the head. Casimero definitely stuns Rigondeaux with a sharp right now and the Cuban veteran's legs briefly turn to jelly. (10-9 Casimero)

Colorful entrance from the champ.

Rigondeaux out to the sounds of Dr. Dre's "Nuthin' But A G Thang."

We are moments away from John Riel Casimero putting his WBO bantamweight world title on the line against Guillermo Rigondeaux. There's no love lost between these two. Will Casimero back up his brash talk or will Rigondeaux teach him a lesson? We're about to find out.

With time on its hands due to two quick bouts, Showtime has Jim Gray interview Brandun Lee, who had three knockdowns to punctuate a first-round KO of Ezequiel Victor Fernandez earlier tonight. The super lightweight is definitely one to watch.

"It was a tremendous headbutt."

He adds: "I would like to fight Russell again."

"Accidental headbutt. It happens. I was looking to establish my jab."

He added: "It's very disappointing. I was actually in camp for four months."

.@GAntonioRussell ready to run it right back after the unfortunate clash of heads. #RussellRodriguez pic.twitter.com/GKQrkiGbT6

Russell concluded saying he wants to run it back with Rodriguez.

How unfortunate. Russell lunges in with a right hook and butts heads with Rodriguez. The impact instantly draws a faucet of blood from Rodriguez's bridge of his nose and drops him in a heap. The ref waves off the bout just 16 seconds into the fight.

You've got to feel for both fighters, having gone through training only for this to be the outcome. But you especially feel for Rodriguez, who is coming off a split-decision loss to Reymart Gaballo that he really should have won.