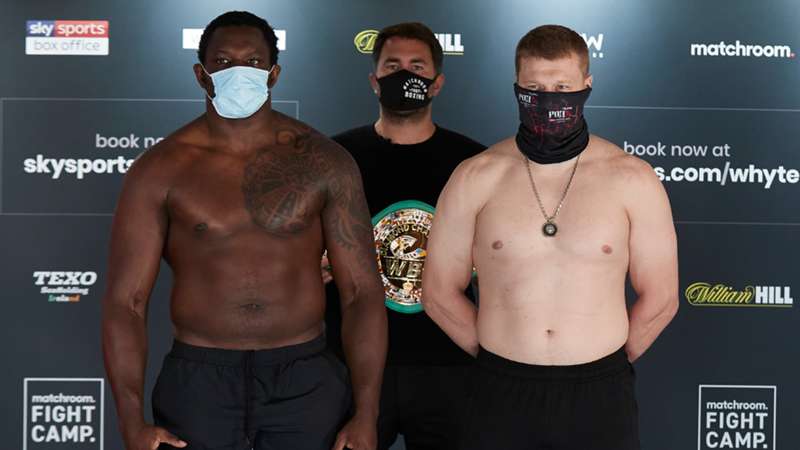 Light weigh-ins were the order of the day as all 10 fighters hit the scales on the eve of Matchroom Fight Camp 4.

Dillian Whyte was, as expected, much leaner and much lighter than his last outing in 2019 at the weigh-in for his anticipated showdown with Alexander Povetkin.

Russia’s Povetkin came in two stone lighter at 16st on the nose (224lb) and looked as though he would measure at even less before removing his clothes.

“When the shirt came off, it was like he was growing,” said former WBC cruiserweight champion Tony Bellew on commentary. “David Haye was the same, he’d look so much slimmer in a T-shirt, and then when it came off, he was much bigger than you thought he was.”

Whyte spent an extended period of time during the COVID-19 pandemic in Portugal, working on his size and shape after admitting he was not in the right place mentally during 2019, when he tipped the scales at as much as 20st (280lbs) around his two fights that year.

Chief support pits unified lightweight women’s champion Katie Taylor (15-0, 6 KOs) against Delfine Persoon (44-2, 18 KOs) in a rematch of their thrilling war at Madison Square Garden on June 1, which some felt should have been awarded to Persoon.

After they hit the scales, Taylor and Persoon faced off for photographs — with the latter leaving her permitted area to get closer to the champ in what was perhaps a touch of mind games on the eve of the huge return bout.

Heavyweights Alen Babic (3-0, 3 KOs) and Shawndell Winters (13-3-9, 12 KOs) appeared more than capable of competing at cruiserweight or even light-heavyweight when they took their turn on the stage.

Croatia’s Babic, a protege of Whyte’s who was with him in Portugal on sparring duty, weighed 14st 9lb (205lb). Chicago native Winters, meanwhile, would actually make cruiserweight at 13st 12lb (194lb) as he seeks to counter his foe’s promising power with movement and finesse.

Welterweights Luther Clay (13-1, 5 KOs) and Chris Kongo (11-0, 6 KOs) do battle for the former's WBO global championship, and came in at similar weights despite the challenger’s decided height advantage.

It was 10st 5lb (145lb) for the unbeaten Kongo and 8oz heavier for the shorter champion in what could steal the stacked show on Saturday.

Cullen was expected to weigh comfortably inside having just moved up from middleweight, where he was defeated by Commonwealth champion and Fight Camp 3 headliner Felix Cash. He did at 11st 10lb 6oz (164lb 6oz), with Chelli only a shade heavier at 11st 10lb 8oz (164lb 8oz).

With the final pre-fight night formality out of the way, promoter Eddie Hearn admitted that there is definitely a correlation between all the light weights and the pandemic-forced bubble created for these four cards at his company’s Mascalls HQ in Brentwood.

“There’s not a lot to do here other than train,” explained Hearn. “Shawndell Winters has been training twice a day. Some guys, like Josh Cullen, are stepping up in weight class so will come in relatively light anyway.”

Matchroom Fight Camp 4, headlined by Dillian Whyte vs. Alexander Povetkin and Katie Taylor vs. Delfine Persoon, airs live on Sky Sports Box Office in the U.K. and  DAZN in the U.S. on Aug. 22.