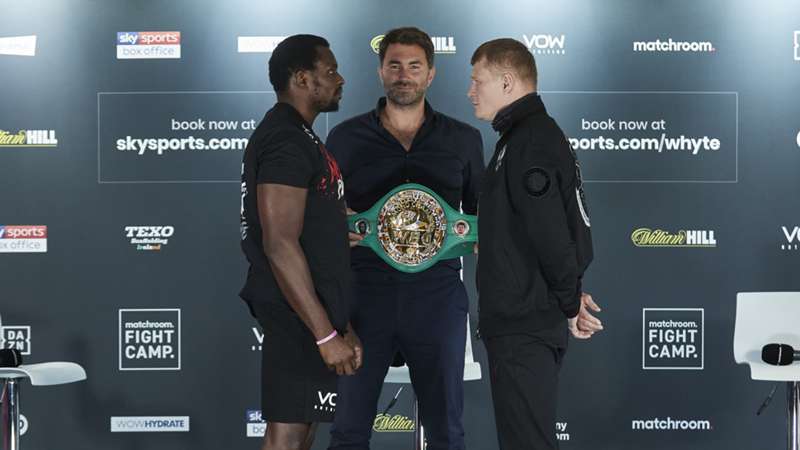 Dillian Whyte could be in a race against time to avenge his defeat to Alexander Povetkin if he wants to get a shot at Tyson Fury or Deontay Wilder before Anthony Joshua does.

Eddie Hearn is confident that the rematch between Dillian Whyte and Alexander Povetkin could happen as soon as November, as Hearn and Whyte look to get "The Body Snatcher" back on track for a world title fight.

Whyte (27-2, 18 KOs) was comfortably outboxing Povetkin (36-2-1, 25 KOs) in the first four rounds of their main event showdown for the interim WBC title at Matchroom's Fight Camp 4 card on Saturday, until a huge uppercut early in the fifth earned the Russian the upset via knockout.

Hearn confirmed a rematch clause within minutes of the fight being over, while being interviewed ringside on Sky Box Office.

Now, he has revealed that they do not want to waste any time — especially as Whyte would now need to reclaim his status as WBC mandatory before champion Tyson Fury completes his trilogy with Deontay Wilder and can then move onto someone else, such as Anthony Joshua.

“Dillian, really, has to go at the end of November at the latest," Hearn told Boxing Social. “That would mean a three week rest now and getting back into camp.

“He’s physically fine, we know it was a bad knockout and there will be a 28-day suspension, which won’t really affect this fight.

“There is going to be a big advantage for Povetkin and Whyte to do that fight before Wilder and Fury fight, because then they can push their position with the WBC.

“That’s something we’ve got to speak to Povetkin about. I think Dillian would be right and ready to box at the end of November.

“Lets see if Povetkin — we know he’s under contract for the rematch — but he’s got to be comfortable to take that fight at that period as well.

“I think all being well this fight could happen as early as November, but we’ll have to see how things go.”

If and when the rematch does take place, Whyte would likely be installed as the favourite due to his strong performance before the finish, including a 10-7 round in the fourth, knocking Povetkin down twice.

However, the Londoner, whose two professional defeats both came inside the distance, would no doubt need to be extra wary of leaving an opening for a third KO loss that would probably dash his hopes of becoming a world champion.