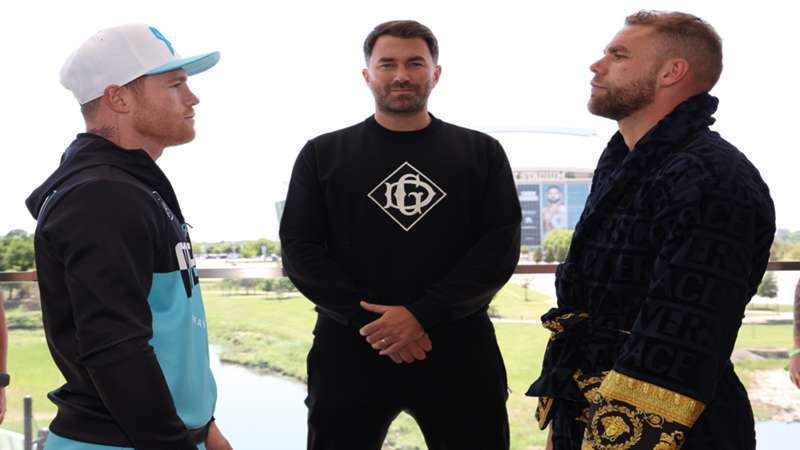 Canelo Alvarez and Billy Joe Saunders meet in a super-middleweight title unification bout on Saturday in front of an expected record-breaking crowd of 70,000 people inside AT&T Stadium in Arlington, Texas. The winner becomes a three-belt 168-pound champion.

Before the two best super-middleweights in the world lock horns, they were feet away from each other at Thursday's press conference.

Unlike what happened on Wednesday when Alvarez and Saunders had to be separated by their respective teams, the 168-pound champions kept things respectful until an intense staredown to end the presser that saw the Englishman blow a kiss to the four-division champion from Mexico. They shook hands with Alvarez giving Saunders a chuckle before walking off the stage.

One of the storylines heading into the weekend is how Alvarez will fare against the slick lefty in Saunders. While victorious, Alvarez had a difficult time with Austin Trout and Erislandy Lara. Alvarez (55-1-2, 37 KOs) praised Saunders for the style he brings, but feels the past is the past, and that will be shown once they are inside the ring.

"He's a great fighter," Alvarez said to Matchroom Boxing promoter Eddie Hearn. "I'm not the same fighter as 6-7 years ago... I'll show that on Saturday!"

For Saunders (30-0, 14 KOs), this is the fight he's been waiting for since he started boxing at the age of five. The 2008 Olympian says, unlike some previous Alvarez's foes, he's to do one thing and one thing only.

Here is what happened at the Canelo Alvarez vs. Billy Joe Saunders press conferences.

facebook twitter whatsapp
Canelo says he's ready for Billy Joe Saunders. He's excited to show the world how much he's improved against southpaws compared to what we saw six-seven years ago.

facebook twitter whatsapp
Tom Saunders, the son of Billy Joe, says this is the fight they have been waiting for and the people of the UK are behind him.

Tyson Fury getting his countryman ready

The last time we saw Frank Sanchez, he put his opponent through the ropes 💥 pic.twitter.com/rJREFPGpyw

Marc Castro feels this will be toughest fight

facebook twitter whatsapp
Eddie Hearn, the head of Matchroom Boxing, opens the presser by saying that as of this moment, Canelo vs. Saunders has broken the indoor attendance record for a boxing card with over 65,000 tickets sold. It breaks the record of Muhammad Ali-Leon Spinks 2, which sold 63,352 tickets at the New Orleans Superdome.

facebook twitter whatsapp
Welcome to DAZN News' live coverage of Canelo Alvarez vs. Billy Joe Saunders. They had an intense staredown and fired a bit of trash talk at one another. Grab the popcorn and enjoy the press conference.