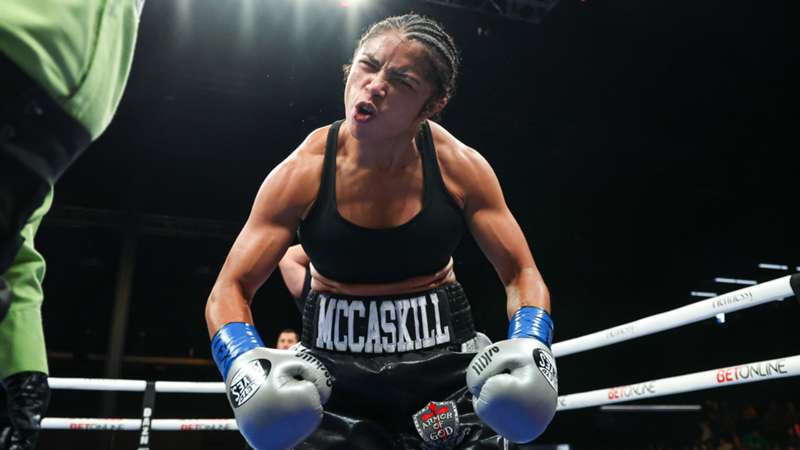 It's tough to envision a women's pound-for-pound list headed by a trio other than Katie Taylor, Amanda Serrano and Claressa Shields, but McCaskill wants to change that.

Jessica McCaskill earned her latest successful defence of the undisputed welterweight championship of the world, causing challenger Alma Ibarra to quit on her stool after three rounds during the recent Jesse 'Bam' Rodriguez vs. Srisaket Sor Rungvisai card in San Antonio, Texas.

The card, which aired live on DAZN worldwide except for Thailand and Uzbekistan, saw Chicago's McCaskill cement herself as a high-ranking star on women's pound-for-pound lists across the sport - including that of DAZN's editorial team, which had her placed fourth prior to the win over Ibarra.

Though P4P lists are of course subjective and vary depending on opinions, you'd be hard pressed to find a women's list anywhere in boxing that didn't have Katie Taylor, Amanda Serrano and Claressa Shields occupying the top three in one order or another.

The question is, did McCaskill's latest win do enough to disrupt that status quo?

The DAZN answer is... not quite.

For now, McCaskill remains fourth on a top-10 list you can read in full here, but given Shields' juggling of both boxing and MMA, Serrano's narrow loss to Taylor in an epic confrontation at Madison Square Garden, and questions surrounding how much longer Taylor will continue to box before calling it a highly successful career, that top 3 will no doubt come under attack from some tremendous recent runs, including that of McCaskill, Seniesa Estrada, Mikaela Mayer and more.

Will McCaskill be the first one to breach that leading trio? She's certainly put herself in a great position to do so, especially if she does move back down to 140lbs as has been reported and dominates there.