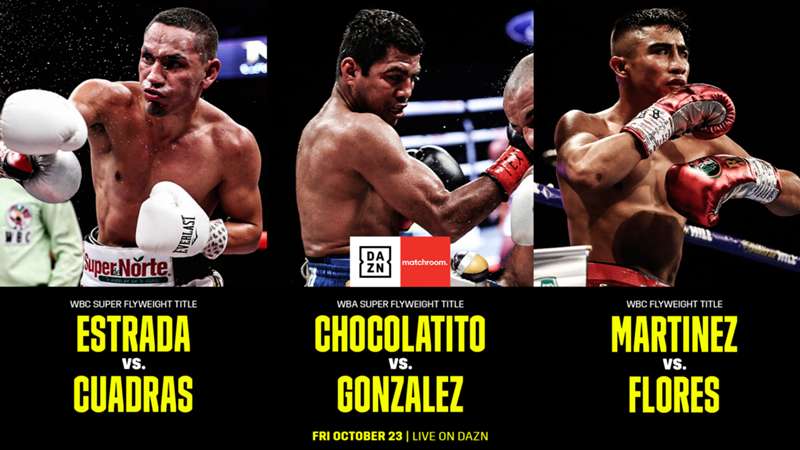 Three world championship fights are on the docket for Oct. 23.

Typically on boxing shows, there's only one world championship fight.

Wins from Estrada and González would put them on a collision course for a rematch won by the latter in November 2012 via unanimous decision.

Estrada and Cuadras fought in a highly competitive contest in 2017, with the former winning a narrow decision. Estrada (40-3 27 KOs) makes his 2020 debut. He last fought in October 2019, stopping Dewayne Beamon via ninth-round TKO. Estrada is excited to return to action but has his sights on "Chocolatito".

It appeared that González (49-2, 41 KOs) had seen better days heading into the Kal Yafai bout in February, as he'd gone 2-2. But the former top pound-for-pound fighter in boxing found the fountain of youth, dominating Yafai and winning by ninth-round TKO to capture the WBA belt.

"I want to thank God for giving me the strength to endure the sport I love and defend my world title," Gonzalez said. "I want to thank Eddie Hearn and Matchroom Boxing as well as my family of Teiken. I also want to thank all my fans, especially my Mexican friends and Zanfer promotions for giving me this great opportunity, it is truly a blessing to fight in Mexico, and I am ready to give my all on October 23."

Over a short time, Martinez (16-1 12 KOs) has become one of the most exciting fighters in the sport with his all-action style and ferocious punching power. The 25-year-old stopped Cristofer Rosales in December to win the WBC belt. He successfully defended the title against Jay Harris in February via unanimous decision.

"I've been preparing very well here with my trainer Mauricio Aceves," Martinez said. "We’re having a very strong camp. Thank God that I’ve still been able to work out throughout the pandemic. Either my trainer comes to my house, or I go to his. Either way, I haven’t lost my conditioning.

“Thank God I haven’t been directly affected by the pandemic. I’ve been able to remain active with running and practical skills with the help of Mauricio. We’re just here putting the final touches on my training, but I’m very confident that my trainer has me in the best shape for this upcoming fight.”

The world title triple-header will be shown on DAZN in the U.S. and TV Azteca in Mexico.