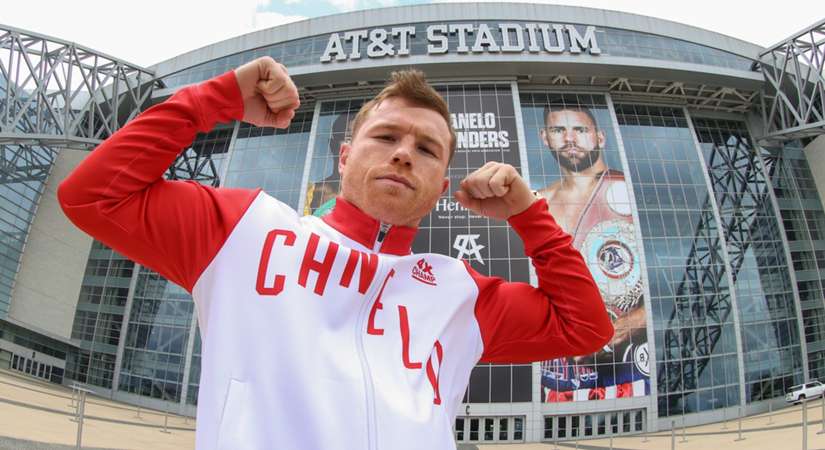 Michelle Farsi/Matchroom.
Watch Canelo vs Saunders on DAZN (except Mexico)

Everything you need to know about how to watch the massive super middleweight championship unification bout.

As their fight gets closer, Saul 'Canelo' Alvarez's disdain for Billy Joe Saunders' antics is seemingly growing by the day. The super middleweight world champions having to be pulled apart following a heated faceoff Wednesday is proof of that.

Well, that increasing animosity will come to a head Saturday night, when Alvarez clashes with Saunders in their super middleweight championship unification bout at AT&T Stadium in Arlington, Tex. and live on DAZN. Canelo's WBA (Super), WBC, and The Ring super middleweight titles, along with Saunders' WBO 168-pound title, will be on the line.

Leading up to the fight, Canelo promises to make an example out of the brash Saunders, as to how trash talking him before a fight can go wrong once the bell rings.

"Ready to make a statement this Saturday," Alvarez tweeted Wednesday.

Meanwhile, Saunders vows that Canelo has never fought a caliber of boxer quite like him and that he intends to prove that this weekend.

"You've never been in the ring with someone like me," Saunders told the boxing superstar face-to-face Wednesday. "You've never seen anybody with this [pointing to his heart]."

Until then, here's everything you need to know about Canelo vs. Saunders.

The Saul 'Canelo' Alvarez vs. Billy Joe Saunders fight card takes place on Saturday, May 8th. The main card launches at 8 p.m. ET / 1 a.m. BST, with the main event ringwalks slated to take place around 11 p.m. ET / 4 a.m. BST. However, the start of the main event depends on the lengths of the earlier fights.

How to watch Canelo vs. Saunders on TV, live stream

Canelo vs. Saunders can be seen on DAZN worldwide (except in Mexico) in over 200 countries and territories. That includes the United States and United Kingdom. Mexico, the native country of Alvarez, is the only country where this fight is NOT on DAZN.

If you aren't subscribed to DAZN, you can sign up here . If you are in Argentina, Chile and Colombia you must download from the Apple App Store or Android Google Play store. Current DAZN subscribers will have the Canelo vs. Saunders card included as part of their plan.