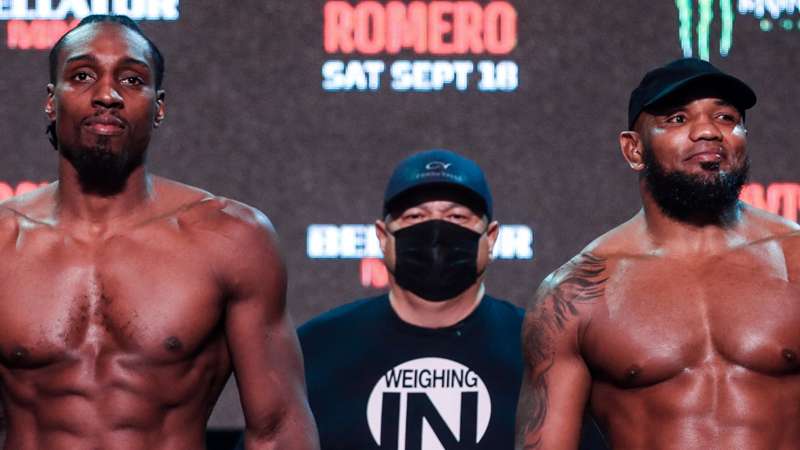 "Mr. Wonderful" made it look easy at the Cuban's expense Saturday night in San Jose, California.

Phil Davis didn't just spoil Yoel Romero's Bellator debut Saturday night. He used it as a stage to produce his own masterclass.

Davis dominated his way to a split-decision victory over Romero in the light heavyweight main event of Bellator 266 at the SAP Center in San Jose, Calif. Judges had it 30-27 and 30-26 for Davis with one judge inexplicably scoring it 29-28 for Romero in what should have been a clear unanimous decision victory for the American, who tallied five big takedowns to power his win.

"Mr. Wonderful" used crisp, clean punching combinations to split Romero's high guard in the opening round. When the pace picked up a bit during the second round, Davis connected on more combinations — only quicker. He also negated Romero almost taking him off his feet with a leg kick by delivering a key takedown during the waning ticks of the round moments later.

Clearly up two rounds entering the third and final frame, Davis saved his best offense for last as he produced three takedowns during the first two minutes and added a fourth when Romero began showing signs of life later.

When Davis had Romero down, he often blasted the Cuban with pounding knees to the ribs.

Romero just couldn't get loose enough to detonate significant offense. The 44-year-old lost time feinting and often came up empty on swings and misses with punches when exploding forward.

The "Soldier of God" has now lost four straight and five of his last six fights dating back to the UFC, where he spent nearly seven years.

Gracie let his hands fly early and the effort definitely paid off. With Lemminger pressed against the cage, Gracie uncorked a vicious right uppercut that landed flush on the chin. Sensing he had Lemminger hurt, Gracie fired off with a barrage of punches and bashed him with an elbow across the face. A few more punches later and Lemminger was basically knocked out on his feet, prompting the ref to stop the action at just 1:27 into the first round. Having won nine of his 10 fights by submission entering Saturday night, Gracie earned the first knockout of his professional career.

More striking could be a regular taste of things to come from Gracie.

"I don't need to take people down to win fights anymore," Gracie said during his post-fight interview in the cage.

He added that he'd like to fight Michael "Venom" Page or have a rematch against Jason Jackson next.