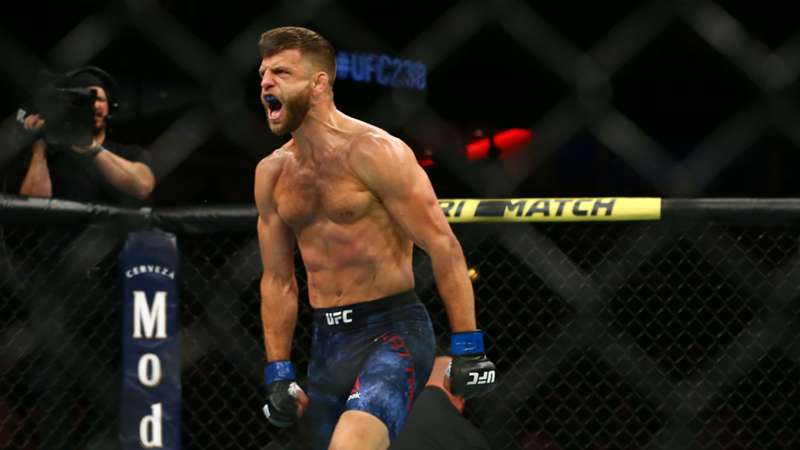 Kattar wants his fight IQ to match his established toughness against Giga Chikadze on Saturday night.

Calvin Kattar stepped into the Octagon with Max Holloway in Abu Dhabi last year, looking to prove that he could get his hand raised against one of the all-time featherweight greats in mixed martial arts.

Instead, the Methuen, Mass. product found out the hard way that there’s levels to the fight game and that Holloway was a serious cut above.

Although Kattar hung on with unearthly toughness, he was on the receiving end of a record 445 strikes en route to a unanimous decision loss as part of Holloway’s surgical MMA masterclass statement.

But there’s no shame in losing to a fighter as glorious as Holloway. Kattar just hopes to use the experience as an invaluable lesson learned that will prepare him for any fighter, beginning with Giga Chikadze in the headliner of UFC Fight Night on Saturday, live from the UFC Apex on Saturday nearly a year to date from the Holloway loss.

“Any time you get a chance to step in there with one of the GOATs of the division, you’re definitely going to pick some things up,” Kattar tells DAZN News over the phone about that stinging defeat.

“We’ll see if Giga is on that level,” he continued.

“We have the opportunity to make things right.”

To “make things right,” the 33-year-old Kattar believes he has to start flashing more of his fight IQ and prove that it’s one of his valid commodities to complement all the grit he seemingly has reserves of.

“I know I got (toughness) to rely on. I know I got that in the back pocket but I don’t want that to become Plan A.

“This game, it’s important to try to hit and not get hit,” he adds.

That being said, not everyone could handle his toughness the way Holloway did with precision and a striking onslaught of his own. And Kattar knows it.

“It’s not cool to take damage but at the end of the day not everyone could take that damage and keep them in the fight long enough to go out and get that finish,” Kattar vows.

“For me, it’s good to know I have that in the back pocket and it always keeps me in the fight, looking for the finish.”

Still, Kattar would like nothing more than to demonstrate his real-time smarts as a fighting dimension against Chikadze, who is 7-0 since joining the UFC, and in future bouts as well.

“In the perfect world, I beat em with technique, fight IQ and make it an easy night,” Kattar says.

“The real bonus is leaving the Octagon healthy.”

Kattar (22-5) accomplishing that against Chikadze (14-2) won’t be easy. The Georgian has generated three straight TKOs, including a third-round finish of Edson Barboza in August. Kattar and Chikadze enter the event as the No. 5 and No. 8 fighters in the UFC’s featherweight rankings, respectively, making this first main event of the company’s 2022 slate all the more pivotal.

The forward-fighting Kattar has been treating it as such, having trained 13 weeks for this clash.

“An opportunity to give an undefeated fighter in the UFC his first loss will only catapult me and hopefully put me next in line with the contenders chasing that strap. It’s a short list of guys and a win over Giga would be huge.”