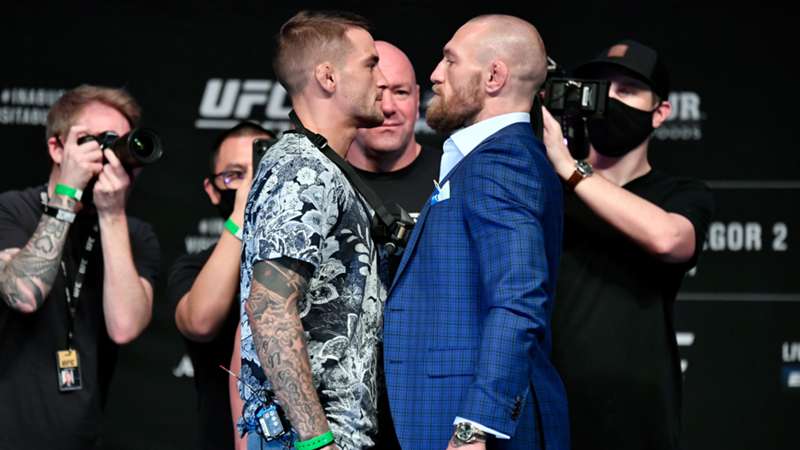 Conor McGregor and Dustin Poirier are in a dispute over a sizable amount of money.

The love fest between Conor McGregor and Dustin Poirier going into and coming out of UFC 257 has come to end.

McGregor and Poirier took their frustrations to social media on Sunday over what initially brought the goodwill from both guys: a $500,000 donation McGregor promised he'd make to Poirier's charity, The Good Fight Foundation.

It all started when McGregor said he'd knock out Poirier in the trilogy fight that is currently scheduled for UFC 264 on July 10. Then the former interim lightweight champion fired back at the Irishman.

That's a fun prediction! @TheNotoriousMMA you also predicted a donation to my foundation and you and your team stopped responding after the fight in January.
See you soon.
July 10th Paid In Full!

McGregor — the first UFC fighter to become a dual champion, has been at the forefront in helping out various places around the world, including his home country of Ireland — shot back at Poirier that he needed information on what the money would be going for.

A donation, not a debt. We’ve been awaiting the plans for the money that never came. I do with all my donations. Know where it’s going dot for dot. Otherwise it goes walking. As is the case with a lot of these foundations, sadly. You took the McG over the belt shows I was right.

Poirier doubled down on his earlier statement.

100% never a debt. You offered, we accepted, and like I said your Team never responded to our emails regarding the process of where funds would be put to work! July 10th you will taste defeat yet Again https://t.co/k3Cu9DG1Me

McGregor let Poirier know him and his team do their due diligence on where money is going and proceeded to threaten Poirier for trying ruin his reputation.

My team does their due diligence to make sure every donation meets the mark. My generosity is known. You will pay with your brain for this attempt at smearing my name. Shooting ass shelling ass bitch. Little bitch kicks from a shell. Good luck when you’re caught. You’re fucked.

McGregor was all fired up and told Poirier that the third fight is off and would "fight someone else on the 10th."

You’re ripped you inbred hillbilly. Why do you wink with your ears? You fucking brain dead hillbilly. 500k with no plan in place. Ye hang tight. Fool. You must be new to money. The fight is off btw. I’m going to fight someone else on the 10th. Good luck on your old contract kid.

Poirier responded in jest, letting McGregor know he stopped him at UFC 257 to even the series at one after the latter won by first-round TKO at UFC 178.