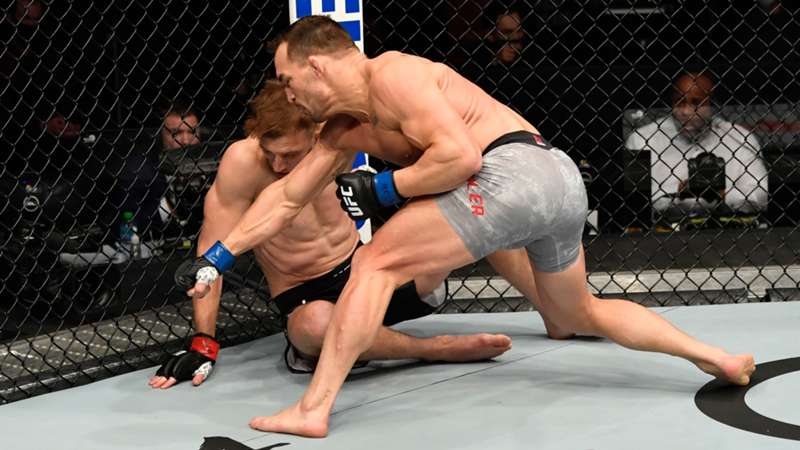 The three possibilities that could lure Khabib out of retirement stemming from how Oliveira and Chandler fare Saturday night in the Octagon.

Despite prodding from Dana White, Khabib Nurmagomedov seems content on calling it a career, officially retiring in March.

And why shouldn't he be content? At 32-years-old, Nurmagomedov walked out of the Octagon with a pristine 29-0 record, having won the lightweight championship of the world and defended it three straight times, producing three straight submission victories over Conor McGregor, Dustin Poirier and Justin Gaethje, before ending his career on top, on his own terms.

No fighter was able to solve his wrestling mastery and Nurmagomedov relinquished the title because he didn't want to hold up the lightweight division — not because anyone made him within the confines of the Octagon.

So, that brings us to UFC 262 at the Toyota Center in Houston on Saturday night, when Charles Oliveira and Michael Chandler will headline the pay-per-view with the vacant lightweight title on the line.

Two aggressive fighters with an assortment of exciting skills, for sure. But for Oliveira and Chandler to even so remotely pique Khabib's interest to ponder ending his retirement for a chance to make it 30-0, they're going to need to deliver fireworks — whether it comes via a dynamic knockout or over the course of an electric five-round fight.

Here's how it can possibly be done with variables that need to be considered as well:

If Oliveira gets another impressive submission win

Oliveira enters this main event against Chandler on an eight-fight win streak — seven of those being by stoppage, including five submissions. Those submissions have come by an assortment of chokes, whether they be guillotine, rear-naked or anaconda. The submissions from the Brazilian and how he's able to cleverly generate them, before cinching them in and having his hand raised in victory, should've grabbed Khabib's attention.

After all, "The Eagle" is no stranger to crafting submission victories over his illustrious career. If Oliveira is able to impressively make Chandler tap out with another submission to be crowned the new champion, the very thought of the Brazilian fighter going up against Khabib on paper alone would make for a strategic, must-see chess match. Would Oliveira be able to make Khabib tap?

If Chandler knocks Oliveira out

A clubbing left hook slumped Dan Hooker in a heap, before pulverizing punches sealed a scintillating knockout victory for Chandler in his UFC debut back in January. It instantly made Dana White look smart to back up the Brink's truck and make Chandler a key free-agent acquisition.

That being said, just imagine if Chandler is able to stop Oliveira with another KO to become the new lightweight champion. Doing so would give the former Bellator world champ even more heat — not to mention the floor to deliver yet another spirited post-fight speech as he did after defeating Hooker. Calling Khabib out then would amplify the situation, perhaps even getting the undefeated warrior's attention.

With all due respect to Oliveira and Chandler, one could easily make the claim that Poirier is the best lightweight on the planet right now. By the way, the UFC rankings reinforce that notion, with Poirier sitting at No. 1. Poirier has won six of his last seven, counting wins over the likes of Anthony Pettis, Gaethje, Eddie Alvarez, Max Holloway, Hooker and McGregor, who he defeated via second-round TKO in January. The only blemish within that stretch was a third-round submission (rear-naked choke) loss to Khabib back in September 2019.

Poirier went for the money in the form of a trilogy with McGregor — to be held July 10 at T-Mobile Arena in Las Vegas — instead of hunting for an immediate lightweight title shot. Knowing all of this, perhaps Khabib would like to see how all this plays out with the winner of Saturday night's Oliveira-Chandler tilt clashing with the Poirier-McGregor trilogy bout victor. Perhaps it'd take that for Khabib's tickle to turn into a serious itch to return to the Octagon.

If that's indeed going to be the case, it starts with Oliveira and Chandler first. DAZN News will bring you all the live updates, results and highlights from UFC 262 on Saturday night. And fight fans in Austria, Germany, Italy and Spain can watch the event and more UFC offerings live on DAZN.