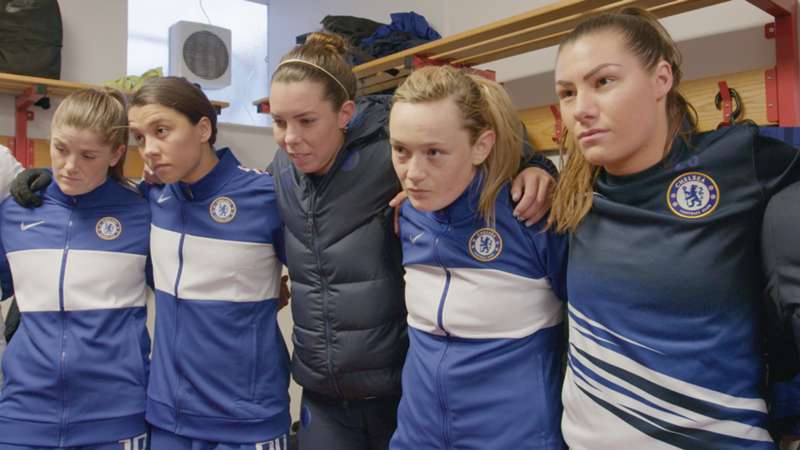 Watch 'One Team, One Dream' on DAZN

The first episode of the six-part series will land on DAZN and DAZN’s UEFA Women’s Champions League YouTube channel on May 29, 2022.

Produced and directed by Alex Sunderland (The Secret Life of 4 and 5 Year Olds, 24 Hours in A&E) and executive produced by Fulwell 73’s Leo Pearlman and Ben Turner, the six-part series follows the fortunes of Chelsea F.C.Women, an extraordinary squad of players performing at the most prestigious levels of club and international football. For the first time, cameras have captured the extraordinary drama, passion, and pressure of life at the top of the fastest growing sport on the planet.

The series tells the tale of a remarkable period (2019-2021) when the team needed to regain their status at the top in a world where the doors are finally flung open for women  football. Through the season we explore the highs and lows of an increasingly professional, commercialised and highly competitive game and all the added pressure those stakes bring.

Acquired via DAZN’s content distribution arm, DAZN Studios, One Team, One Dream will join DAZN’s slate of acclaimed sports documentaries and series that will land on the streaming service in 2022.

It accompanies DAZN’s ‘World Cup Stories’ including Green Lions, a feature length documentary exploring the inspiring untold story of Cameroon’s 1990 World Cup heroes, Maradona: The Fall, an explosive look behind the scenes of one of the biggest controversies in World Cup history, and Ronnie, the ultimate redemption story of O Fenômeno.

Grant Best, DAZN’s EVP Global Commissioning and Original Content, said: “It has never been more important to increase visibility and access to the world of women’s sport, and telling the stories of its greatest athletes and coaches is one more way we can do that.

"Fulwell 73 is a world class content creator and we’re excited to bring One Team, One Dream to fans around the globe. This is just another example of how DAZN and DAZN Studios is working with leading talent in the TV industry to create a true sports entertainment platform.”

Leo Pearlman, partner at Fulwell 73, said: “We’re really pleased to be partnering with DAZN Group and Waffle Iron Entertainment to bring One Team, One Dream to audiences around the world.

"This exciting era-defining series about Chelsea FC Women will give viewers a never-before-seen  look at one of the highest calibre women’s football clubs in the world. But this series is about so much more than football.

"It shines a light on the powerful, human stories at the heart of the club, it’s about leadership at a pivotal time for women’s sport and how you win against all odds with a multinational team against the backdrop of a global pandemic.”

Guy Laurence, CEO of Chelsea Football Club, said: “We’ve always known how phenomenal our Women’s team are and how much hard work and commitment the players, Emma Hayes and the support team put in behind the scenes each and every day.

"One Team, One Dream now offers fans a fascinating opportunity to experience this for themselves and understand what it takes to become an elite women’s footballer here at Chelsea, playing in one of the best leagues in the world. We look forward to sharing these past experiences with our fans and take them on our journey with us.”

DAZN’s record breaking coverage of the historic Katie Taylor vs. Amanda Serrano fight on April 30, 2022 was the most watched female headlined boxing broadcast in history.