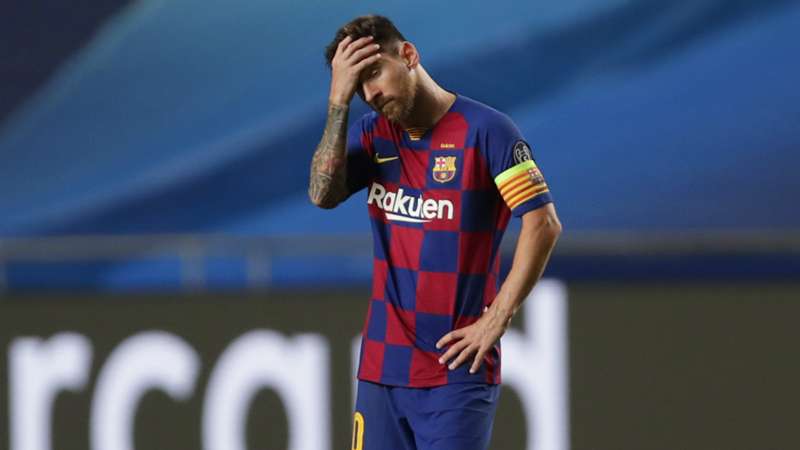 The Argentine superstar told Barca on Tuesday that he wanted to leave the club.

Lionel Messi dropped a bombshell on Tuesday when he reportedly requested a transfer out of Barcelona, with the talk of the soccer world immediately turning to where the superstar will end up.

Messi intends to activate a release clause that would allow him to join any club in the world without paying a transfer fee to Barca, although the Catalan club disputes the validity of the clause — meaning lawyers for both sides could get involved.

Regardless of what happens, it appears that Messi's exit from the club with which he's spent his entire professional career is much closer than anyone could've anticipated, and although he's now 33, he'll still have suitors from around the world lined up for his services.

Imagining Messi not wearing Barca's iconic Blaugrana jersey is tough, but there are some teams that could be great fits should he ultimately leave Catalonia.

Here are a few possible destinations, ranked by likeliness:

If any club has the inside track on Messi's signature, it's Man City. The Sky Blues have reportedly been interested in luring him to the Etihad Stadium for the past few seasons and certainly have the financial wherewithal to compensate the Argentine handsomely.

Given that Messi's most decorated seasons at Barcelona came under current City manager Pep Guardiola, the player could be amenable to a reunion in northwest England. In addition, Messi's good friend and Argentina national teammate Sergio Aguero is a City legend, and the prospect of joining forces and delivering a coveted Champions League title to the Blue side of Manchester could be very tempting — with an ESPN report indicating preliminary talks have already happened.

It's impossible to talk about ultra-wealthy clubs without mentioning arguably the wealthiest. PSG has shown willingness to use its financial might in order to lure high-profile stars to the French capital, and in Neymar, Kylian Mbappe and Angel Di Maria it currently boasts the most expensive attacking trio in the history of the sport.

If money's the deciding factor, then Messi's chances of landing in Ligue 1 are extremely high. If it's not, the opportunity to reunite with Neymar could still influence Messi's decision — Barca's recent efforts to reacquire the Brazilian after PSG spent a world-record fee to lure him away from Camp Nou have been in part to placate Messi, who was unhappy to lose Neymar as a teammate three years ago.

This is much more of a Football Manager-style dream rather than a real possibility. For the better part of 15 years, Messi and Cristiano Ronaldo have been considered 1 and 1A in terms of who's the world's best player — indeed, they've entered the realm of Greatest of All Time with their consistent attacking exploits — so even with both now in their mid-30s, the prospect of the two GOATs lining up as teammates is mouthwatering.

Let's file this one under "unlikely to happen, but would be amazing if it did."

You'd have to imagine that the United higher-ups have discussed this as a possibility, even though there have been no serious links between the Red Devils and Messi. Manager Ole Gunnar Solskjaer has done well to right the ship at Old Trafford after it went adrift following Sir Alex Ferguson's retirement and the slew of managers that tried unsuccessfully to fill his shoes, but United could use a true global superstar to kickstart its attempts to get back into top spot in the Premier League after a near decade-long title drought.

United is another team that could make the financials work, although whether the current ownership would be interested in doing so is another question.

If any team in MLS is going to land Messi, it'll be the expansion side in South Florida.

Aside from Miami's obvious positives as a city, the club part-owned by David Beckham has pledged to be a destination for high-profile stars and has already started fulfilling that with the recent signing of World Cup winner Blaise Matuidi from Juventus.

Miami has the lowest chance of any team on this list of securing Messi's services, but if anyone has the star power to pull it off, it's Beckham.

It's always been accepted that Messi would eventually return to his boyhood club at the tail end of his career, and he still might. The problem for Newell's is that Messi is still performing at a level that affords him the opportunity to walk into the starting lineup of any club in the world, and given his ignominious exit from the Champions League at the hands of eventual champion Bayern Munich, it seems likely that Messi would want another crack at European glory before crossing back into the Western Hemisphere.

He's already publicly stated that he wants to play "at least six months" for his hometown club, but it's highly unlikely that six-month stint will come anytime soon.