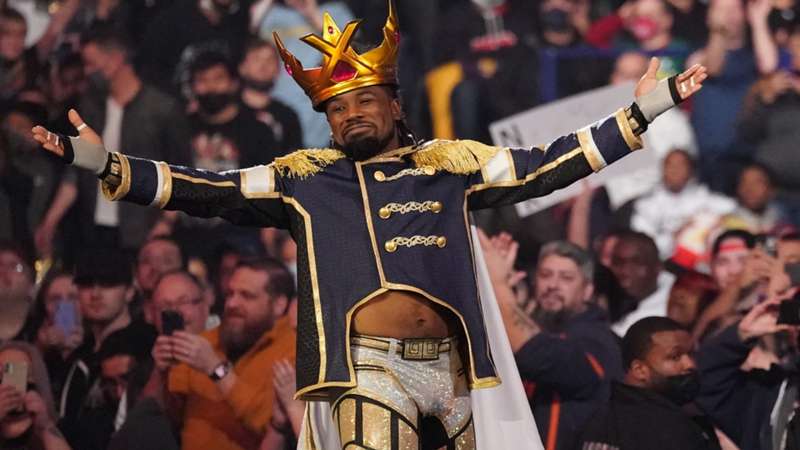 His royal majesty provides hot takes on everyone from the "Macho King" Randy Savage to the "King of Harts" Owen Hart, King Booker and more.

To be King in the WWE isn't exactly the same as holding a championship. But heavy is the head that wears the crown and the responsibility of presiding over the WWE Universe is a serious load to shoulder albeit a trek equipped with its own perks. Since its inception in 1985, the King of the Ring has allowed a revolving door of Superstars to reinvent themselves and add dimensions to their profiles by donning the crown.
Xavier Woods is currently relishing in this opportunity as he continues to pull from various influences while sprinkling in his own ingredients to elevate King Woods further and leave indelible marks of wrestling royalty.
"There's something pompous about being King," he tells DAZN over a recent Zoom conference. "When you hear the word, you think pompous, stuck up, pointing your nose up in the air. There's obviously a negative side to that, but there's obviously also a very funny, entertaining, lighthearted side of that.
"While I'm still drawing inspiration from things that I was before — movies, pop culture, video games — I'm also trying to make sure that I understand that I can have this air about myself now and I can feel myself a little bit more and that's OK," he continues. "It doesn't mean I'm a bad guy, it just means that I'm a little bit stereotypical royalty. And that plays a heavy role to me on the way I present myself on the microphone. It seems more guarded but it's actually more freeing in a weird way. I'm enjoying figuring out where the puzzle pieces fit together."
Perhaps, King Woods can connect the dots a bit more as he embarks on the Road to WrestleMania beginning with the Royal Rumble on Jan. 29.
In celebration of his coronation as royal majesty, King Woods holds court with DAZN News, providing his takes on some of the most noteworthy Kings in WWE history.

"King Booker aside because he's on another level, he's in another stratosphere when it comes to favorites. But the first king that I saw that played into this — the whole scroll and having the Sir with you — was King Mabel. When I was watching wrestling and sort of getting into my groove of wanting to be able to do this when I became an adult, that's when I became absorbing it a little bit more than I was otherwise. King Mabel had Sir Mo with him and for whatever reason, that was always the most entertaining thing to me. Just the fact that you have someone with you with Sir as his first name and brought you scrolls and things like that and all these guys were carrying his big behind all the way to the ring. Just the pageantry of King Mabel always, always stuck with me."

"Leaning fully into the idea of being a king, that is what I always saw the Macho King as. You could see the transformation occur and that's to me the coolest thing about wrestling. It's not just like this match happened or this tournament happened, so automatically they're different all around. There's little subtleties that occur and just like in real life, you're not just a different person. It takes time for you to evolve into what you become. Once he became the Macho King, you saw this cool evolution where he was still Macho Man and he was still Randy Savage, obviously, but he had a little extra oomph, a little extra layer to him that he could really lean into. It's stuff like that I really want to draw from — the idea of an evolution of figuring out what it means to become king, what it means to wield royal power, what it means to wear a crown. It's much more than a tournament and I call myself king. There's layers that I'm attempting to unfurl and hopefully at the end of it, we've seen a pretty cool evolution of the Xavier Woods."

"Incredible, absolutely incredible. My favorite thing about Owen beside being the King of Harts was always him running around with two Slammys. Just hilarious (laughing), just the man."

"He was fantastic. The King of Kings. Obviously that moniker came around before King Woods is here, so there's a conversation we got to have. But I'm sure we'll see him at some point. But hell of a king. Knew to hold his kingdom down with a sledgehammer, swinging it on people, theme music Motorhead blaring. He gets it."

"We always talk about that memorable promo (Austin 3:16). I feel like the lesser part of the conversation is King of the Ring. That was the event, that was the tournament, that was where that oomph came from. It's always looked at like 'yeah, it's a tournament, it's cool, you might get a crown or cape or scepter,' but this really can be used as a springboard to opening essentially the keys to the kingdom and that's what Stone Cold used it as. I remember on that night just being taken aback and saying 'woah, you're saying things like this on TV?' Now, you're waiting on bated breath — what's going to happen next? Really cool and interesting the way that Stone Cold was able to shape that into what he eventually became and hopefully — fingers crossed — your boy is working on the same thing for himself."

"He's the man. King Bookerrrr. From the way he held himself to the accent, it was hilarious. But again, it was a guy who understood who he was and understood that this king idea can add another layer to what you already have. So, to be able to mix the two things — his kingly demeanor and then his little bit more hood side — mixing what's like oil and water makes for something really entertaining and he was definitely a guy who understood that and used it to his advantage."