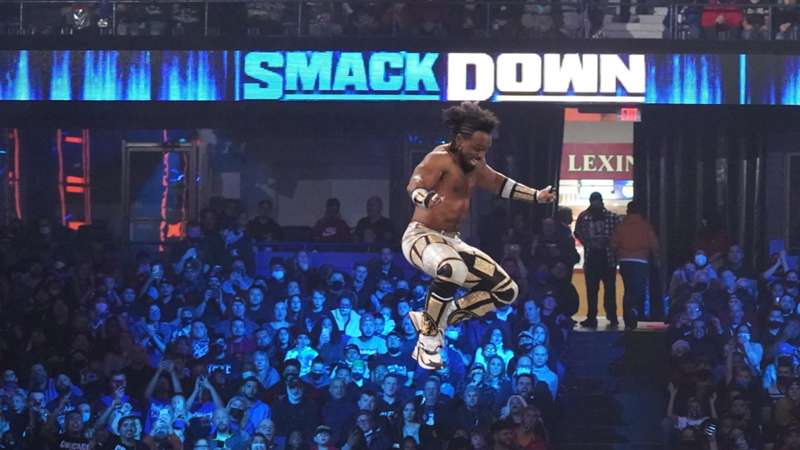 Woods speaks with DAZN News about how an Intercontinental championship reign could be in his royal future. Perhaps even more.

That’s twice in the span of a week that SmackDown tag team champions, The Usos, survived New Day — first at WWE Day 1 and then this past Friday night in a street fight.

Well, as WWE gets ready to embark on its annual ‘Road to WrestleMania’ with the Royal Rumble slated for Jan. 29, it’s understandable that King Woods points his scepter in the direction of a solo title run.

The way he sees it, there’s a champion out there that he can make bend the knee and give up the gold.

“Once you become king, you realize you are, ahh, I guess you've earned certain respects and those certain respects allow you into certain places you may not have been allowed in otherwise,” Woods recently told DAZN News via a Zoom conference.

“Well, now that I'm king, hmmm ... things can change because I've been here for quite a while and there are a lot of things that I want to accomplish,” he continued. “One of them was obviously becoming king, but that aside, is becoming Intercontinental champion.”

The title is currently held by Shinsuke Nakamura with Woods believing that the strap is in need of new ownership, not to mention a royal, revamped look.

“I love this new design of the current championship but I do believe it would look much better if that leather was white,” Woods said.

“So, that's what I'm looking to not only become Intercontinental champion but give it a little upgrade at the same time.”

While targeting the Intercontinental championship is certainly an admirable goal, a Royal Rumble victory can present King Woods with an even meatier opportunity in the form of a title shot at WrestleMania.

If Woods can somehow be the last man standing in three weeks and can maneuver a showdown with Brock Lesnar, he’d face the same “Beast” who ended Kingston’s championship reign at 180 days and most recently Big E’s title run at 110 days.

The way King Woods views it is the New Day has three times the chance at the Rumble, so positioning himself there is possible.

“The thing about the Royal Rumble is that for whatever reason when it comes around you hear ad nauseum 'Ah, teammates might be against each other at the Royal Rumble' which I've never understood,” he shared.

“The whole point is that you have friends who help you get to the end and then at that point, you'd figure out what to do once everyone else is taken out.

“So, yes, while there might be people who don't have the same mentality, the king's decree is that when myself, Kofi Kingston, and Big E are all in the ring, if that occurs, we're all three there, then there's no option but for anyone else but for us to win this match,” he added for good measure.

“So, please understand that if the cards align and we all have the correct numbers and Mercury is in retrograde, please believe The New Day will be main-eventing WrestleMania.