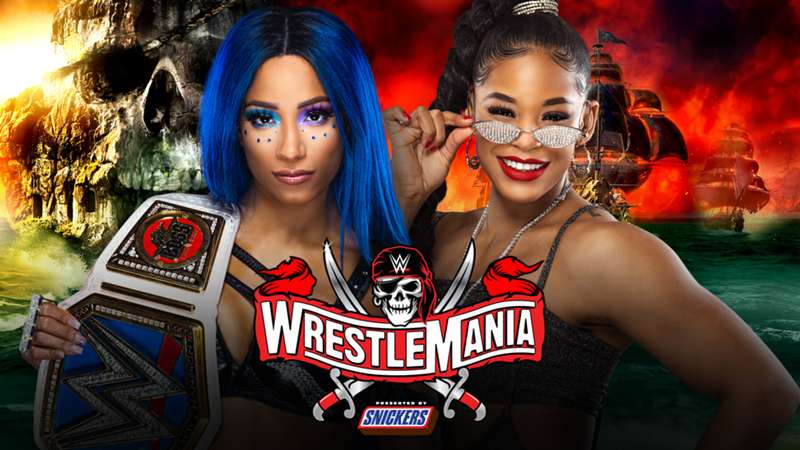 Night one of WrestleMania 37 delivered, with Belair's crowning achievement in a historic main event.

The start of WrestleMania 37 featured a delay because of bad weather. But by the time night one of "The Showcase of the Immortals" concluded, history was made at Raymond James Stadium in Tampa, Fla. The main event saw two African-American women in the headlining spot of WrestleMania for the first time ever and they delivered fireworks.

Bianca Belair defeated Sasha Banks to capture the SmackDown Women's Championship in what will go down as one of the greatest matches in the history of WrestleMania main events.

Belair and Banks had the crowd in the palms of their hands from start to finish. Belair was crying when they were in the middle of the ring and Banks was trying to keep her emotions in check. The story of the match was the power and athleticism of Belair against the smooth technical wrestling ability of Banks.

Every time each female had an advantage, the tide would turn in an instant. Banks finally seemed to get on top and looked to be moments away from retaining her title. She attempted to grab Belair's long ponytail. The challenger had other plans in mind.

Belair blocked it and whipped Banks as hard as she could. Belair tried for the KOD but Banks blocked it. The former champion went for Bank Statement but Belair reversed it and hit the KOD to win the championship to a giant roar from the crowd.

Other matches on the show included an in-ring appearance by multi-Grammy award-winning celebrity Bad Bunny, who delivered a stellar performance as he and Damian Priest beat The Miz and John Morrison, while Braun Strowman defeated Shane McMahon.

Here is what happened at WrestleMania 37, night one.

Lashley and McIntyre get into heated confrontation

facebook twitter whatsapp
Bobby Lashley and MVP are doing an interview backstage when they are interrupted by Drew McIntyre. The champion and challenger are in each other faces and telling each other they don't care about the weather delay and will fight right here, right now.

facebook twitter whatsapp
Before the opening match, it is announced that there is a weather delay because of lightning in the Tampa area. There's no word on how long it will be.

facebook twitter whatsapp
Vince McMahon kicks off WrestleMania with the wrestlers behind him on the stage to welcome the fans back.

While a good gesture, McMahon shouldn't have been the first person to be seen by the fans. That should have been saved for the participants in the first match, Drew McIntyre and Bobby Lashley.

.@WWEUniverse, we're so happy to see you!

facebook twitter whatsapp
Welcome to DAZN News' live coverage of WrestleMania 37. It's going to be a momentous night of action. Make sure you grab the refreshments, go to the bathroom and enjoy the history that will be made.