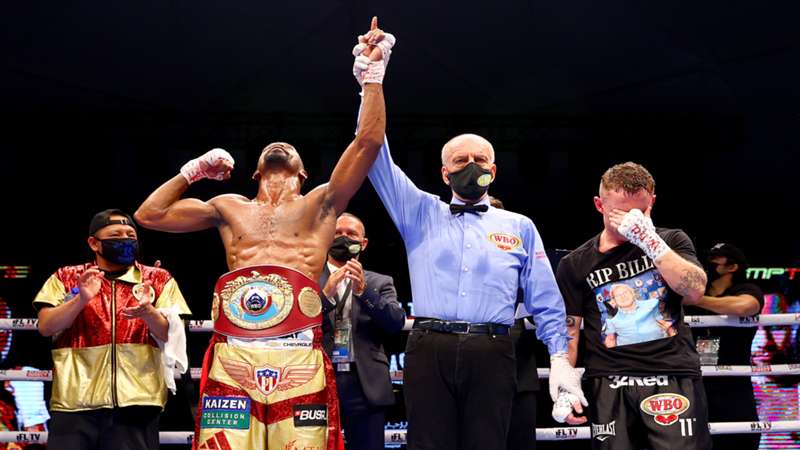 A spectacular performance from the WBO junior lightweight champion Saturday in Dubai.

In a fight to see who can cement his legacy, Jamel Herring made sure to record an indelible impression.

The end came when Herring uncorked a scintillating short left uppercut which ricocheted off the top of Frampton's forehead and dropped him with a heap in the sixth round. Frampton took the full eight count and found himself in major trouble when he arose off the mat, as Herring finished him off with another uppercut and two unanswered lefts, prompting the ref to step in and end the bout.

The round prior, Herring perfectly timed a straight left hand while Frampton walked right into it for the bout's first knockdown. That paved the way for the champion to unleash the definitive fireworks en route to his third straight title defense, as he improves to 23-2 with 11 KOs.

The victory was especially savory for Herring, who bounced back from a disappointing victory via disqualification in September and had to overcome a cut over the same right eye Saturday that gave him trouble during his last bout.

The champion added that he'd like to unify the division with WBC junior lightweight champion Oscar Valdez. That being said, prior to the bout, the WBO ordered that the winner of Saturday's fight advances to face the winner of the upcoming bout between Shakur Stevenson and Jeremiah Nakathila. Herring and Stevenson are stablemates.

Overcome with emotion after the loss, Frampton made good on his vow to retire with a loss.

"I said before that I'd retire if I lost this fight," Frampton said, "and that's exactly what I'm going to do."

Herring landed 10 of 31 power shots last round. A very sharp champ through five. He brushes Frampton back with a left here in the sixth. He tags the challenger with an overhand left. Herring unloads on a short left uppercut, and Frampton is down again!! Frampton takes the full count and is hurt getting up. Oh my! Herring has Frampton in major trouble. Herring brushes Frampton back with a left. Frampton is wobbly. Another uppercut. Two lefts, and it's over! The ref steps in, as Herring gets the career-defining win he was looking for!

Herring's corner is working on his right eye. Similar spot to the cut he sustained from being headbutted in his last time out in September. The cut is on the lid, just below the brow. Something to monitor for sure. Frampton is moving forward, lunging if he needs to just to get inside on Herring, while the champ tries to create distance with some counterpunching. Frampton returns fire inside and pops Herring's head back with a right hand to that right eye. Oh! Herring times a straight left perfectly and makes Frampton taste the canvas!

This is getting intense 👀

Right as Frampton was coming on following a cut to Herring’s right eye, @JamelHerring catches him perfectly early in Round 5. First knockdown of the fight ...#HerringFrampton | LIVE NOW on ESPN+ pic.twitter.com/cehK6COg4e

Excellent punch from the champ. Frampton is back up and seemingly has his legs with him. (10-8 Herring, 49-45 Herring)

Frampton punching at the same time as Herring and breaking through to connect inside to the body. Now Herring goes inside, and Frampton returns fire with an uppercut. He's walking the champ down now—blood dripping from Herring's right eye. Frampton has got to make this a scrappy fire fight. Both men are picking up the pace here in the most action-packed round we've seen so far. Frampton with a short right hook that lands. A left hook from him follows. He digs into the body and is doing an excellent job of closing the distance against the champ. Solid round from Frampton. (10-9 Frampton, 39-37 Herring)

Herring again comes out as the aggressor. He lands a right and straight left combo that brushes Frampton back. The champ adds a couple more punches now as well. Frampton grazes Herring with a right inside as he presses the issue. If Frampton is willing to eat a punch or two, he can let loose inside with some damage. Check hook and straight left from Herring once again turns the body of the shorter Frampton, who is industrially looking to spark offense. Herring's round, but Frampton had success in the final minute, where he dug into the body and even snapped Herring's head back with a solid right jab. (10-9 Herring, 30-27 Herring)

facebook twitter whatsapp
Herring landed nine punches during the opening round. Frampton slips and is right back up. Herring with a right that turns Frampton. The champ is walking the challenger down and adds a left hook. Herring flicks the jab out there and adds a left to the body moments later. Another left to the body lands seconds after that. Plus, Herring is making Frampton miss. Every time Frampton comes inside, Herring swiftly moves out the way and goes back to the jab. Herring scores a right-left combo and another. The champ sharp through two. (10-9 Herring, 20-18 Herring)

facebook twitter whatsapp
Frampton in the black and gold, Herring in red and yellow. Early on, Herring walking Frampton down, trying to assert the jab. The champ's size advantage is glaring as he stands 5-10 to Frampton's 5-5 with an eight-inch reach edge. Herring tags Frampton with a stiff left to the face. Frampton is going to need to get inside of the champ's reach and make this fight ugly. It's already clear. (10-9 Herring)

The champ is here!

Frampton hits the ring first and watches Herring make his ring walk to the sounds of Nas' scorcher "Blue Benz."

Who can cement his legacy? We're about to find out!

facebook twitter whatsapp
Frampton has stated that he'll retire if he loses to Herring. The champ, Herring, on the other hand, views this bout as an opportunity to etch a career-defining victory.

Sharpening up in the final moments. ⚔️#HerringFrampton UP NEXT on ESPN+ pic.twitter.com/veLEK6Nnyh

Judges have it 99-91, 98-92, and 96-95, all in favor of Nietes, who made Carrillo fight his fight en route to the 43rd victory of his pro career. Any time Carrillo barrelled ahead, his offense proved futile, as Nietes showed savvy in bringing him back to the center of the ring, where he jabbed him adequately and threw in power punches when he saw the openings to do so.

facebook twitter whatsapp
Nietes catches Carrillo with an overhand right in the ninth. He's in complete control and has been throughout this bout.

Nietes cranked up a winding left uppercut which misses its mark but connects on a stiff right to the temple. Easily the best shot of the seventh round.

Nietes in control, keeping Carrillo at bay with the jab

facebook twitter whatsapp
Nietes is doing a solid job of sticking out that jab and keeping Carrillo at a safe distance. However, as Andre Ward just noted, both fighters should let their hands fly a little bit more, as we're halfway through this 10-round contest with the sixth round coming up next.

Meanwhile, Frampton got a visit from Amir Khan

🎥 A peek backstage before the final prep begins, as @RealCFrampton & team get a visit from @amirkingkhan. 🤝#HerringFrampton | LIVE NOW on ESPN+ pic.twitter.com/kp0vJ8aQ32

This is how the champ entered Caesars Bluewater Dubai

📍 The champ @JamelHerring has arrived for the biggest moment of a career that has seen so much.#HerringFrampton | ESPN+ - 4pm ET / 1pm PT pic.twitter.com/XsIsbH5O1x

Donnie Nietes and Pablo Carrillo kicking off this main card

This junior bantamweight clash is getting things started for us with this main card. The Nietes-Carrillo bout will serve as the co-feature to Herring-Frampton, as Zhankosh Turarov vs. Tyrone McKenna — the originally slated co-main event — was scratched after Turarov withdrew from the junior welterweight match.

Winner of Herring vs. Frampton to meet winner of Shakur Stevenson vs. Jeremiah Nakathila

facebook twitter whatsapp
ESPN reported that the WBO just sent letters to both Herring's and Frampton's promoters saying the winner of Saturday's bout has 30 days to state in writing that he will fight the winner of the upcoming tilt between Shakur Stevenson and Jeremiah Nakathila tentatively slated for June 12. If the winner doesn't sign the paperwork, the Stevenson vs. Nakathila fight will be for the WBO junior lightweight title.

This Herring vs. Frampton main card is live!

Welcome all to the live coverage of the Jamel Herring vs. Carl Frampton main card. We'll be bringing you all the live updates, results, and highlights, so get comfortable and park it here. Bright prospect Keyshawn Davis just made Richman Ashelley quit after the fourth round as a result of pressure and power punching, especially that straight right hand that landed at will.