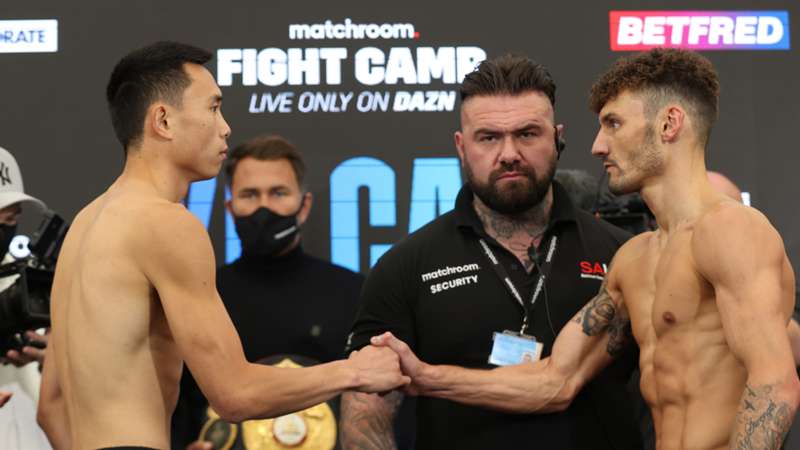 Despite the late removal of Conor Benn vs. Adrian Granados, we have ourselves a big night of title action at Fight Camp 2.

The era of Matchroom Sports on DAZN in the UK and Ireland begins with the return of Fight Camp, as champions, contenders and prospects alike battle it out in Eddie Hearn's back garden, so to speak, at Matchroom HQ in Brentwood, Essex.

After a positive COVID-19 test for Conor Benn scrapped his night one main event against Adrian Granados, the world title fight between champion Xu Can and challenger Leigh Wood stepped into the headline slot.

Both champion and challenger made weight for the 12-round contest for Can's WBA featherweight title, while Tommy McCarthy and Chris Billam-Smith also stepped onto the scales comfortably within the 200lbs cruiserweight limit in their winner-takes-all scrap for the British, European and Commonwealth belts.

Campbell Hatton, 2-0 son of the legendary Ricky 'Hitman' Hatton, makes his third professional appearance on the undercard while Anthony Fowler must avoid an upset against late replacement catchweight opponent Rico Mueller if reported plans for a huge domestic headliner later in 2021 are to come to fruition.

You can rewatch the full weigh-in on DAZN's YouTube below, as well as a written summary of the weights for each of the six fights on the Matchroom Fight Camp 2, night one card.

Tune in on July 31 for the action-packed card, available worldwide on DAZN except Australia and New Zealand.

And now for the main event...

facebook twitter whatsapp
It's the WBA featherweight title on the line as Xu Can defends against Leigh Wood in the fight which now main events Fight Camp 2.1. Challenger Wood steps on for a reading of 125lbs and 5oz, before the champion weighs in at 125lbs and 3oz. We have ourselves a world championship main event!

facebook twitter whatsapp
It's Tommy McCarthy vs. Chris Billam-Smith with the British, European and Commonwealth titles on the line. This could be one of the sleeper hits of the entire three-night Fight Camp. It's 199.5lbs for The Gentleman Billam-Smith, and 199.3lbs for McCarthy.

facebook twitter whatsapp
The son of Ricky Hatton looks to move to 3-0 when he faces Jakub Laskowski over four rounds. The Polish fighter measures 135lbs, 9 oz while Hatton is one ounce lighter at 135 and 8.

Now for Fowler vs. Mueller

facebook twitter whatsapp
Anthony Fowler and Rico Mueller do battle over 10 rounds at a catchweight as opposed to a strict super-welterweight limit. Can Fowler avoid a banana peel and clinch a reported big clash later this year? Mueller weighs 156lbs, bang on the catchweight, while Fowler is at 155lbs and 4oz.

Next weights: Cullen vs. Yildirim

facebook twitter whatsapp
Avni Yildirim was last seen getting blown out the water by pound-for-pound king Canelo Alvarez. Can he bounce back at the expense of Little Lever's Meat Cleaver? Cullen weighs 163lbs, 7oz for this super-middleweight 10-rounder. Yildirim hits the scales at 163lbs on the button.

facebook twitter whatsapp
Six rounds at super-lightweight for Kirstie Bavington and Sandy Ryan in a fight that will stream on Facebook before the televised main card. Bavington weighs in at 144lbs, 3oz. Ryan meanwhile weighs 144lbs, 7oz.

facebook twitter whatsapp
David Diamante welcomes us to the stage, and we're ready to get some fights locked in!

Will there be an Anthony Fowler announcement?

facebook twitter whatsapp
Hearn responds to Darren Barker's question about an announcement for a big Anthony Fowler fight. With Fowler on the card tomorrow, Hearn keeps his cards close to his chest. He acknowledges that there's been talk of an all-Liverpool showdown with Liam Smith, but knows he has to get past Rico Mueller first.

facebook twitter whatsapp
Hearn continues that he offered Granados a last-minute eight-rounder to keep him on the card, but the offer was politely declined. Granados is determined to ensure Benn remains his next fight.

facebook twitter whatsapp
Eddie Hearn confirms during the intro of the weigh-in coverage that Adrian Granados will head home to re-start training, despite reports the fight with Conor Benn could be rescheduled as early as one of the other two Fight Camp 2 cards on Aug. 7 and Aug. 14.

facebook twitter whatsapp
The weigh-in stream has started, and we'll provide weights and any major news or incidents here for those who miss part of the video.