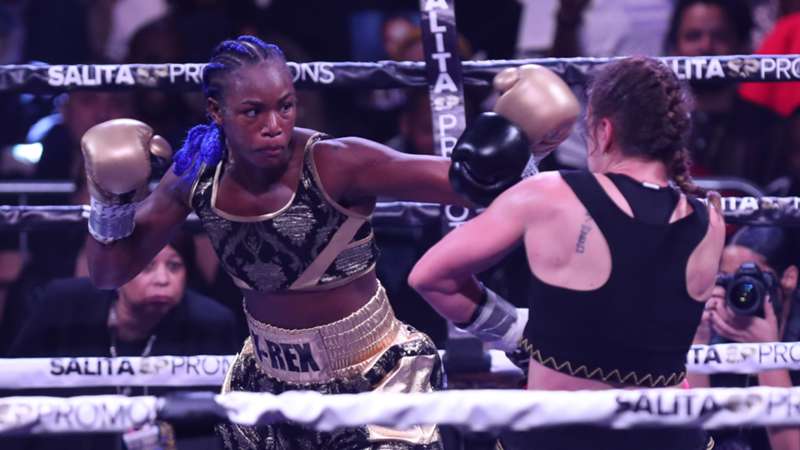 Claressa Shields talks with DAZN News about making the call to try her hand at mixed martial arts and her poignted words on how women are treated in boxing.

Claressa Shields shocked the combat sports world with the announcement that she signed with Professional Fighters League.

Shields (10-0, 2 KOs) is a three-division world champion in women's boxing and one of only seven boxers who have become an undisputed champion.

The two-time Olympic gold medalist will make her MMA debut in 2021 in a series of special attractions and then look to enter the 2022 PFL season, where she'll get the opportunity to win $1 million.

Days after signing with PFL, the 25-year-old Shields spoke with DAZN News about why she signed with PFL, her skill level at this point, when she'll have her first MMA fight and what separates MMA from Boxing in how they treat women.

Claressa Shields: It was on my mind, but it wasn't something that I was thinking would happen so soon. It wasn't like, 'Oh, next year, I'm gonna be doing MMA'. It was more just like, 'Um, you know what (it's) something that I thought that I may end up doing, but I thought toward the end of my career, like James Toney and fighters who have come from boxing to MMA'. I always wanted to do it if that makes sense.

DN: I remember seeing you when Amanda Nunes fought last year in Las Vegas. I remember you saying that you were very impressed by the presentation and impressed with the skills that the women brought inside the cage. Was that the when you thought to yourself that this could be pretty cool sometime down the line?

CS: It was great to see that they were fighting in the main event on pay-per-view, to see their branding, to see how large of a following that they have. One night you can have 100 followers, then the next night you can have 100,000. (It) depends on your performance and how well you do, and then you get paid off pay-per-view buys. I really enjoyed that part of it. I wish women's boxing would get their s—together, and we wouldn't have to go through this. I always feel like MMA has more exposure. I was trying to stick with boxing to help it get to where I want it to be. But it still has a long way to go for sure.

DN: The one thing that you've always had to struggle with is the fact that women haven't been getting the recognition in boxing that they do deserve. As we near the end of 2020, where do you see women in boxing?

CS: Here in America, women's boxing really had a large flame where many of us were fighting on television and some big fights would get made. Women's boxing here in the U.S. has gone down. The women have been put on a back burner for male fighters who haven't accomplished anything. They've been given dates and pay-per-views, and the women have been sitting around with these networks trying to line up a date. We work our butts off just to get overlooked. But on the flip side, in the U.K., women's boxing is doing very well because Eddie Hearn and DAZN are putting their work behind Katie Taylor and Natasha Jonas. They have come a long way. Right now, I'm here to hold the networks accountable. They say women can't sell pay-per-view buys, and they give up. But they'll put somebody with less of a following on pay-per-view.

DN: When you look at PFL, Bellator and the UFC, they do put a spotlight on women's fighting. Why does boxing seem to be lagging behind?

CS: I feel like they're just sexist and that they're intimidated by insanely strong women. But it's like that in all sports. Women can box. Women can mostly do everything that men can. I think you have to hold the networks accountable. They're the ones who make the decisions on who is and isn't on television.

DN: What led to you deciding to sign with PFL?

CS: Actually, it was the conversation I had with PFL owner Peter Murray to see what his plans would be for me. If he had said your first fight would be against Kayla Harrison and it's one fight deal with us and then go back to boxing, I would have just hung up the phone. The conversation was great. The money was lucrative. My reputation is all I have. I worked very hard to get here and be a multi-time world champion. I'll be fighting MMA. The tournament is where you fight for a million dollars, but that gives me time to start training. The best way for me is to make that transition and not have to be rushed. I like the PFL because you control your own destiny. If you make it to where you can fight for a million dollars, the owner who makes that decision can't say, 'Hey, yeah, you know, you don't deserve a million dollars because we don't think you're big enough." You work your way up there in PFL and now you have a chance.

I've done everything in boxing that you can do. I've been a world champion. I'm currently a world champion, undisputed, and hold all titles, have titles in multiple divisions, undefeated, and still not given a fair shake. I have to keep demanding, yelling at them and saying, 'This is my worth. This is what I'm worth. This is what I deserve'. You got to keep doing it. It just gets tiring because I still have to train for the fight. I still have to fight my opponent. Then on the flip side, I got a fight with these networks to just be treated fairly. It just gets stressful sometimes.

DN: I've seen that your debut is pegged for 2021. When are you going to know that you're ready to get into the cage?

CS: I should have my first MMA fight in June of next year. That's why, as I said, I'm taking my training very, very seriously. I've been doing some behind the scenes stuff that people haven't seen and learning all these moving parts. I'm gonna trust my coaches, whichever coach that I choose to work with. Right now, I'm just going to go into different gyms to learn stuff, but I already am confident. I've heard great things about Jackson-Wink's Gym as I'm going to train there with Holly Holm and Jon Jones. I've heard great things about training with Din Thomas at American Top Team. I want to give both of those gyms a try. Who knows, they may end having to work together to work with me.

You never know. I want to go where I have fun learning. There's a lot of pressure on me already. Hopefully, the coaches understand that and don't make me stressed out because there are so many moving parts and having to be in the limelight all the time. People are gonna have footage of my training. I just really want to be able to focus, learn, and be patient with myself. I think I want to have a team who is just as honest as me. If I got into the boxing ring with MMA fighters I'd kick their ass right now. But when you talk about actually going into the PFL season, and you ask me, 'Hey, do you think you're ready to wrestle, do you know jiu-jitsu?' I'm going, to be honest with myself and tell you I know a little bit of everything, but not like how I know boxing.

DN: There are rumblings you're going to return to the boxing ring in January or February. Are those reports correct, or are you going to take 2021 off?

CS: No. 2021, I'm definitely fighting in February. I might end up fighting again toward the end of the year in 2021, also in boxing. I'm not retiring. I would not do the girls in boxing that much of a favor. If they want to be world champions at 154 and 160 pounds, they have to come see me because I hold the majority of the titles.