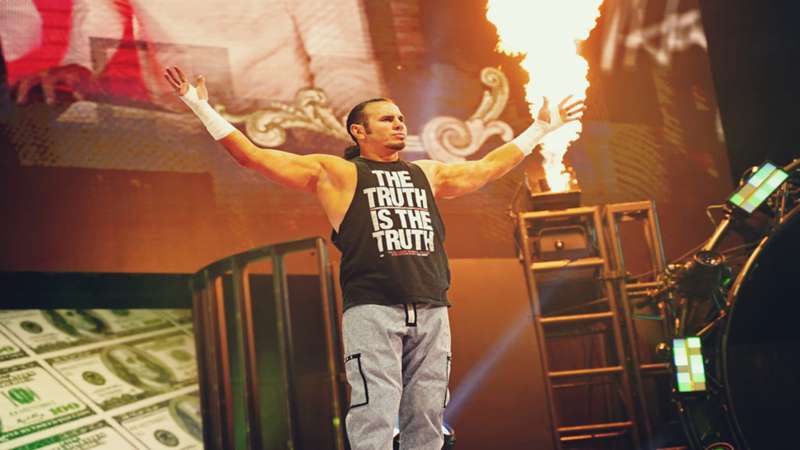 The pro wrestling life of Matt Hardy couldn't be going any better for him.

He's currently in All Elite Wrestling, where he's "Big Money" Matt Hardy and part of AHFO. Hardy will also be reuniting with his brother Jeff on March 12 for Big Time Wrestling. Then, every Friday, The Extreme Life of Matt Hardy podcast premieres, which discusses the nearly 30-year career of the former WWE Tag Team champion.

What happens when you're about to have a history-making match, and you find out it is cut for time?@MATTHARDYBRAND breaks it down in this week's #ExtremeLife, all about the Royal Rumble 2000 tag team tables match, available now!

Hardy took time to talk with DAZN News about the podcast, his favorite tag team to work with, reuniting with Jeff, his time in AEW, and the possibility of appearing at this Saturday's WWE Royal Rumble.

DAZN: The reason we are talking today is your brand new podcast, The Extreme Life of Matt Hardy. What made Matt Hardy want to get into the podcast game?

Matt Hardy: I feel like for me, as my in-ring career dwindles down, it is the next step of my natural progression. There are other things I want to do. Other things I want to move into. And as a way for me to reflect on my wrestling history, which I've been very fortunate to play a huge role in so many important matches, angles, and stories in the creation of the TLC match or Ladder and Table matches and whatnot. So for me to be able to do this podcast and tell my story and put my spin on it, I love doing this stuff and breaking things down in detail. I feel like it is the next step in my natural progression as far as making a living utilizing wrestling, which I love with all my heart.

DAZN: You and Jeff will always be forever linked with The Dudleys and with Edge and Christian. But if you had to pick one, Matt, which team was better?

MH: I'll be totally honest. All three teams worked well together, but we had the best chemistry with Edge and Christian. I'm sure my brother would say that as well because we were all very like-minded. The Dudleys were a different team, who worked a different style, but they were great as heels and bad guys. They were such an important recipe to the masterpiece that became TLC. But when it comes down to an individual tag team, it’s going to be Edge and Christian because we just had the greatest chemistry with those guys better than any other tag team we've ever worked against.

DAZN: I was thinking about you when Jon Moxley came out to begin AEW Dynamite. You had your own trials and tribulations a few years ago. If you could say anything to Jon Moxley, or maybe you have already, what would it be?

MH: The best thing I could say to anyone who has ever been through that type of scenario is stick to your guns and do what's right, what feels right in your heart, and that is what will keep you on the up and up and on the straight and narrow. Sometimes in pro wrestling, when there's so much pain, difficulty, and stress on you, it is very easy. It's a very slippery slope to fall into a vice, whatever it may be. It is one of the greatest lessons I have ever learned, and it has made me a better person in so many ways. Having a family changes everything. I know Jon has a child as well now. That little voice inside you that is your conscience that keeps you on the up and up. If you listen to that, you will always be yourself.

DAZN: Where would Matt Hardy be if it wasn't for your wife and children?

MH: That's a good question. Whenever I did go through my troubled period, my wife was on my ass. So I will love her, respect her, appreciate her forever because of that, and not a lot of people would. There’s some people who go, ‘Oh my god, Reby Hardy, Reby Sky, she's just a loudmouth, she jumps in other people's businesses, and she's such a shit talker.’ But if it wasn't for her being who she was, who knows where I would be now, if I am even here. But I am so happy that I had her there. She was a real ride or die. I love her to death because of that and having the kids and everything else. But without her having the personality she has, my life would look very different right now. So I'm very grateful for her.

DAZN: There was recently a cool announcement that you and Jeff will be reuniting for the first time in three years as a tag team on March 12. How exciting is that for you?

MH: Stoked. I'm extremely excited. I feel like my life is back to being normal that my brother and I are going to be working together again. It's so strange when we're working in separate places, and we've done that in the past. We really are at our best when we're together. He is a rock star. He really is. He is the definition of that “it” factor. Jeff really has that. But then with me, I was always the business guy behind the team, or I was always the one who was steering the ship. So when we're together, we're definitely at our best. I'm very excited that in 2022, there's going to be that Hardy Boys reunion, and 2022 is going to be a Hardy year. I'm excited about the possibilities of where we're going to end up eventually.

DAZN: There was a lot of controversy regarding Jeff, and you had said he was okay. It seems like everyone just really blew up a situation that was never there to begin with.

MH: I can tell you this. The last 22 years that I have worked with my brother as a professional wrestler, he has been the most responsible that I have ever seen him in the last year-and-a-half. He has been on top of it because he's been through it all. But he's really got his s— together. And when all this comes out, and it's his story to share, but I think everyone is going to see, and I think WWE even knows that as well. They jumped the gun on this release. So whenever he's ready to share that story, I know he will. People are going to be blown away by a lot of the details. There's that expression; everything happens for a reason. I don't always necessarily agree with that because sometimes people use it as an excuse. But in some ways, this seems like it was divine intervention because the Hardy Boys were meant to be back together. I think it's time for the greatest tag team in all space and time, the Hardy Boys, who are both still active, which is incredible after all the abuse we put our bodies through, to have one last huge run before everything is said and done.

DAZN: What is Matt Hardy in 2022, because one week it seems like you’re a babyface then the next week Matt Hardy's a heel, then he's a tweener?

MH: In January 2022, I am still technically a heel as Big Money Matt, the guy who is taking these young guys who grew up fans of Matt Hardy, and he's taking a wee fee cut of their money. I'm a bit of a heel. Some of that is taking a little shortcut and taking advantage of people to make more money myself and build my empire bigger. But we were just in North Carolina recently (to) very good, positive reactions in my backyard. I would say within two months or so from now, Matt Hardy is going to end up changing characters to a degree, and I think more people are going to prefer to cheer me as opposed to me.

DAZN: You're nearing the second anniversary of your time in AEW. How would you look at your two years so far in the company?

MH: I've enjoyed it. I'm so proud to work for Tony Khan. I love Tony Khan as a booker and a promoter. He has done everything he can to put me in a very respectable role, so I'm very grateful for that. In a couple of months from now, let's say March, roughly, things are going to be good for Matt Hardy. I'm very excited about the time when it arrives.

MH: I don't know. But one thing that I would say, and this is kind of my view of wrestling, is never say never about anything. Anything can happen in the insane industry of professional wrestling.