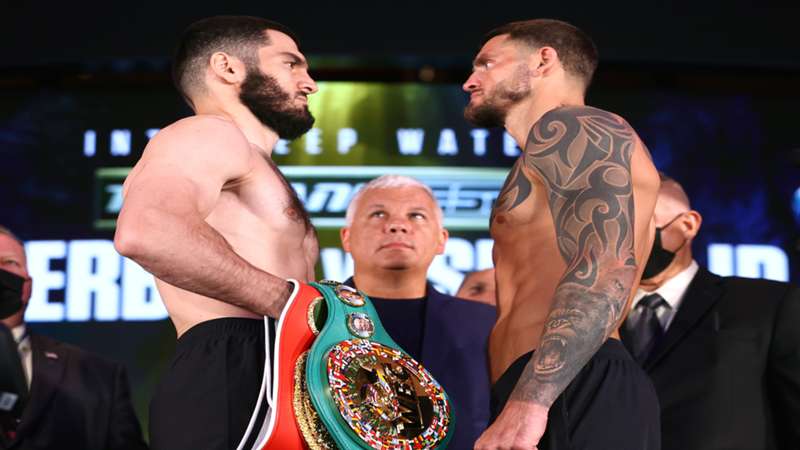 Artur Beterbiev reminded everyone who is the top dog at 175 pounds.

Coming into Saturday's light heavyweight title unification against Joe Smith Jr., Artur Beterbiev was the only world champion to be undefeated with a 17-0 record and have every win by knockout.

Beterbiev kept the remarkable streak intact as he's now 18-for-18 as he dropped Smith three times to win by TKO at the 2:19 mark of the second round to remain the IBF and WBC champion and added the WBO belt with the victory.

"I need a little bit more time (to feel what this means)," Beterbiev said in his post-fight interview. "Right now, I don't feel it. In a couple of days, I will understand."

Usually, Beterbiev likes to get his feet wet, but Smith jumped right in his face at the opening bell and kept firing the jab. The plan was effective for about two minutes, and then Berterbiev took control and never looked back.

Beterbiev (18-0, 18 KOs) blasted right hands upstairs and to the body, making Smith rush in. Beterbiev saw the opening and threw an overhand right that sent Smith to the canvas for the first time in his career.

Instead of returning to what worked in the first, Smith came out trying to outgun Beterbiev. The three-belt light heavyweight champion had no problem obliging. He made Smith pay and dropped Smith for the second time. Smith made it back to his feet but was staggering to the corner and not in great shape.

Beterbiev smelled blood in the water. The 37-year-old landed a left hook, followed by another left hook and a right hook to send Smith through the ropes for the third knockdown of the fight.

Beterbiev stayed composed but showed why he's a ferocious finisher. He connected on two short uppercuts and then a right hand, which made Smith turn his back to Beterbiev and the referee. That's all the official needed to see and waved the fight off.

The fight to make would naturally be Beterbiev against WBA (super) titlist and Canelo Alvarez conqueror Dmitry Bivol to determine the first undisputed light heavyweight champion. There is also a bout with WBO mandatory challenger Anthony Yarde, who was in attendance. Beterbiev didn't seem interested in Yarde and wants to make history with Bivol.

"Unification fights are more interesting and motivating," Beterbiev said. "I would prefer to be undisputed."

Time will tell on what happens next.

Here is what happened at Artur Beterbiev vs. Joe Smith Jr.

facebook twitter whatsapp
Beterbiev def. Smith 2:19 by TKO of the second round to retain the IBF and WBC light heavyweight titles and adds the WBO belt.

Both guys came out swinging to begin the second. But it was Beterbiev who got the better end of the exchange and dropped Smith for the second time. Smith made it to his feet.

Beterbiev connects on a left hook, followed by another left hook and a right hook to send Smith through the ropes which is considered a knockdown.

Beterbiev stayed composed. He connected on two short uppercuts and then a right hand, which made Smith turn his back. That's all the referee needed to see and waved the fight off.

What a performance from Beterbiev.

facebook twitter whatsapp
Loud chants for Smith to kick things off. Smith with a left hook to start the fight. An exchange of jabs. Smith keeping the jab in Beterbiev's face. Beterbiev unloads a right but misses over the head. A right by Smith. A right over the Beterbiev's guard from Smith. Stiff jab from Beterviev. A right stops Smith in his tracks. Chopping right over the guard from Beterbiev. Body shot from Beterbiev and then a right hand. Smith comes in and Beterbiev unloads an overhand right to send Smith to the canvas for the first time in his career. Great final minute from the unified champion to steal the round away. (10-8 Beterbiev)

Time for Beterbiev vs. Smith

If you are expecting this one to go to the distance, you will be disappointed.

After stunning Nova in the third round, Ramirez left no doubt in the fifth. Ramirez executed a slight feint, dipped a right hook and blasted a straight left that sent Nova's head off one rope and then to the bottom rope for the thunderous knockout.

Thankfully, Nova made it up to his feet and is ok.

Great performance from Ramirez. The two-time Olympian made a statement and just put the featherweight division on notice.

facebook twitter whatsapp
In the main card opener, Abraham Nova (21-0, 15 KOs) takes on Robeisy Ramirez (9-1, 5 KOs) in featherweight action. A fun fight to kick things off. This is a true 50-50 bout.

facebook twitter whatsapp
Welcome to DAZN's live coverage of the light heavyweight title unification clash between Artur Beterbiev and Joe Smith Jr. We will have live updates, results, and highlights from what should be an action packed night of fights.