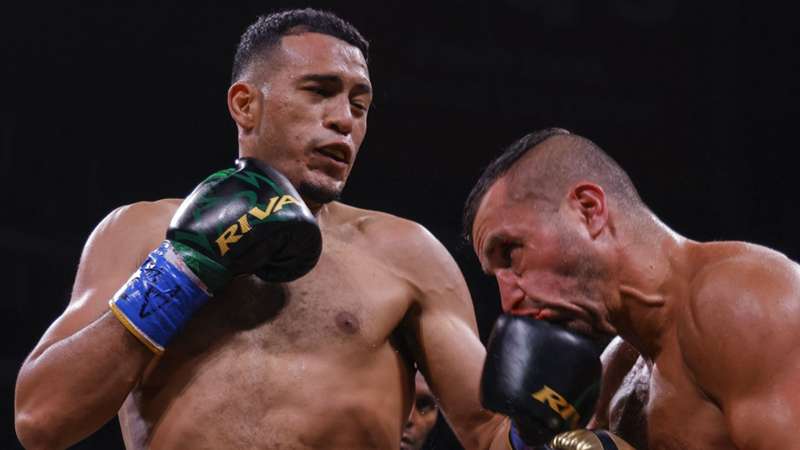 David Benavidez is one badd, badd man. Quite possibly, the baddest super middleweight on the planet.

Benavidez drowned David Lemieux out with a diverse offering of punches en route to a third-round corner stoppage at the Gila River Arena in Glendale, Ariz. on Saturday night.

With the TKO victory, Benavidez improved to 26-0 with 23 knockouts, capturing the interim WBC super-middleweight title in the process and inching one step closer to a possible mega clash with undisputed champion Canelo Alvarez, former champ Caleb Plant or even WBC middleweight titleholder Jermall Charlo.

Lemieux set the tone by showing that he'd engage in a fire fight with Benavidez and for at least part of the first round, it seemed to be working. However, that took a drastic turn when Benavidez caught Lemieux with a devastating left hook, which put the Canadian on wobbly legs and left him open to a barrage of punches. Referee Harvey Dock took a close look as Lemieux was saved by the bell. Dock later told Showtime's Jim Gray that he would've stopped the fight if there were a few more seconds on the clock in that first frame.

The second round had Benavidez catching Lemieux with a right-left combination that put the veteran on his backside through the ropes and nearly out of the ring.

Lemieux showed plenty of grit surviving that round too, but another stinging right-left combination had his corner stopping the bout in the third.

"Mike Tyson gave me that name — 'The Mexican Monster,'" Benavidez told Gray. "What do you think I'm going to do?"

facebook twitter whatsapp
Lemieux doing his best to get his legs back and he throws heavy-handed punches, trying to get to Benavidez. The punches are being shielded well and here comes Benavidez trying to close the show. He crunches Lemieux with a strong left-right combination flush and Lemieux's corner has seen enough. They stop the fight. That's it! Benavidez grabs the interim WBC super-middleweight championship.

Benavidez pounds Lemieux with a left uppercut and Lemieux goes down!

.@Benavidez300 DROPS Lemieux into the ropes in RD 2 💥👀#BenavidezLemieux pic.twitter.com/02rBcFMhyx

He's back up on his feet but is being smothered by Benavidez with just about every punch in his arsenal. Lemieux is doing his best to weather the storm and he's fighting back but is being overwhelmed. His corner should strongly consider stopping this. (10-8 Benavidez, 20-17 Benavidez)

David Benavidez vs. David Lemieux; Round 1

facebook twitter whatsapp
Lemieux immediately trying to jab his way in and cut the ring off. Good idea as Lemieux will need to get within his 4 1/2-inch deficit. His early diligence leads to a left hook. Benavidez works the body with a strong right hand. Benavidez methodically works inside himself and lands a series of right hands. He's already in rhythm. Benavidez catches Lemieux with a left hook and he wobbles him! He's unloading and Lemieux is in a world of trouble! Lemieux survives the round but he's not in good shape. (10-9 Benavidez)

Time to show out for The Valley 🌵@Benavidez300 heads to the ring in front of his hometown fans. #BenavidezLemieux starts NOW on @Showtime. pic.twitter.com/XtojzNLH4V

facebook twitter whatsapp
Will Benavidez snatch the vacant interim WBC super-middleweight title in devastating fashion? We're about to find out next.

All three judges score it 100-90 for Gomez, who improves to 6-0. The 24-year-old Cuban did it behind a constant power jab that quickly became the opening for him to unleash that right hook and uppercuts as well. A solid win over a veteran and one that should put Gomez in the mix.

Gomez in a zone now

The eighth round once again has Gomez flashing that piercing straight jab. A lead-off right hook also landed with blunt force in addition to Gomez breaking out a crunching left uppercut as well. Great work from the Cuban.

Cota wisely rested on the ropes in an attempt to regain his bearings fully, as Gomez unloaded. The strategy worked as Cota got his legs back but still lost the round.

Gomez with the edge halfway through

facebook twitter whatsapp
His punches are bigger and have carried more impact and significance through the fifth round. That being said, Cota looked sharp during that fifth, so let's see if he can build on it.

No surprise there. Nunez allowed Fierro to tee off and every time he did, Nunez was there to make him pay with piercing, accurate counterpunch.

Lemieux more than willing to engage in a fire fight

facebook twitter whatsapp
Where Fierro goes wild with his punches, Nunez remains compact with sharp output. He catches Fierro with a crunching counter right and has really brought the heat through seven. This contest is set for 10 rounds.

facebook twitter whatsapp
A lunging Fierro, looking for a left hook, bumps heads with Nunez and we see a cut opened up above Nunez's left eye.

Early fireworks between Nunez and Fierro

facebook twitter whatsapp
Nunez tags Fierro with a solid left hook and Fierro with some compact, thudding shots that connected — amongst the hard-hitting action in the opening round.

facebook twitter whatsapp
Luis Nunez vs. Jonathan Fierro in a battle of undefeated fighters is upon us.

facebook twitter whatsapp
Hello and welcome to live coverage of the David Benavidez-David Lemieux main card. The winner takes home the vacant interim WBC super-middleweight title and earns a shot at undisputed champion of the division, Canelo Alvarez. Keep it locked here for all live updates, results and highlights.