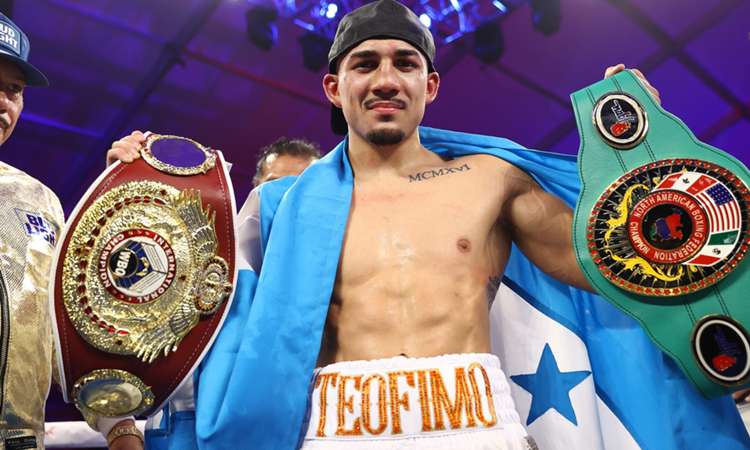 Top Rank
Check your region for Eubank Jr vs. Benn on DAZN

DAZN rounds up some of the best fighters who are 25 or younger.

Little by little boxing begins to present new fighters who despite their young age are putting the sport on notice and DAZN is here to make fans aware of some of those already making an impact.

But before moving on to that list, there must be some recognition given to the world champions who are 25 years old or younger.

In the super flyweight division, there is WBC champion Jesse Rodriguez who is only 22 years old. At 122lbs, WBO and IBF champion respectively, Junto Nakatani and Svenathi Notshinga are 23 years old, and a special mention also needs to go to Devin Haney who is the undisputed lightweight champion.

Now let's move onto the fighters 25 and under who fans should look out for.

Two-time former super middleweight world champion, who I'm sure you didn't expect to see here, still belongs on this list until the end of the year when he turns 26. He has been looking for a fight with Canelo Alvarez for years, but everything points to the Guadalajara champion opting to go the other way. So Benavidez will have to be smart to corner him.

The former super welterweight world champion moved up to middleweight two years ago and now with Gennadiy Golovkin back at 160 they could negotiate a bout for the Kazakh's IBF and WBA titles. It would be a classic battle of youth vs. experience.

The Texan is slowly advancing in the welterweight division. He is ranked number one by the WBO and WBA, while the WBC has Ortiz at number two with IBF positioning the 24-year old at number three. The world champions at welterweight are Errol Spence and Terence Crawford and now Ortiz is just waiting for an opportunity to present itself.

Jarron Ennis is almost in the same position as Vergil Ortiz. He is ranked number one by the IBF and number two by the WBA and WBO; while for the WBC he is ranked third.

Will we see him get knocked out by Ortiz before a championship fight?

Another one you surely didn't expect to see in this list. Teofimo Lopez was the unified lightweight champion and is now looking to do the same in the super lightweight division.

His first fight in the super lightweight division was a seventh round stoppage win against Pedro Campa and is now set to return against an unnamed opponent in December.

The nickname is the perfect description for this Mexican's style inside the ring.

El Pitbull has opened the doors for himself thanks to impressive performances as of late, including a loss to Gervonta Davis last year in a fight which pushed the American to his limit. Cruz is currently ranked by three governing bodies and hopes 2023 can be the year he challenges for a world title.

The former world super bantamweight champion is looking for his return to the top once more, but this time at featherweight. Brandon Figueroa recently knocked out Carlos Castro in his debut fight at 126lbs and hopes to be back in action very soon.