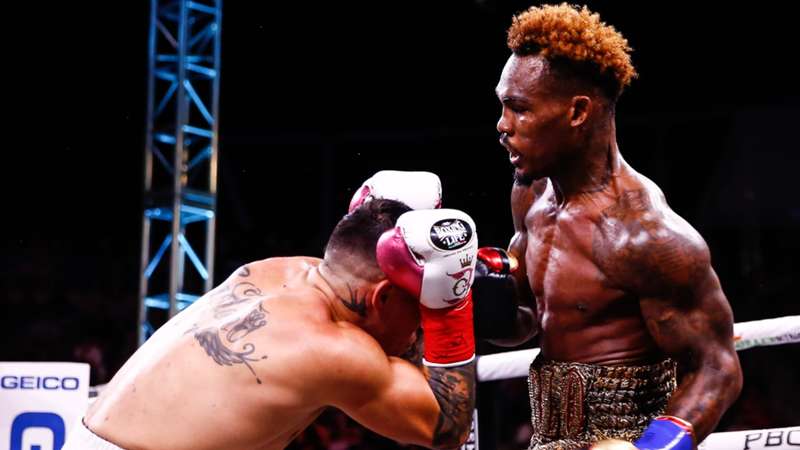 One of the most controversial and best fights of 2021 finally happened on Saturday when Jermell Charlo and Brian Castano locked horns to determine an undisputed super welterweight champion.

Charlo made sure there was not another disputed decision as he dropped Castano twice to win by tenth-round knockout to become the undisputed super-welterweight champion from Dignity Health Sports Park in Carson, Calif. DAZN had the fight scored 87-84 for Charlo going into the tenth round.

Charlo stops Castano in RD 10 to become the first ever 154-lb undisputed champ in the 4-belt era. #CharloCastano2 pic.twitter.com/Fy81yrXTBp

Charlo and Castano continued their 2021 "Fight of the Year" candidate by having a back-and-forth war through the first half of the fight, with neither guy taking a back seat. So who would make the adjustment in the second half to walk out of California the champion?

It was Charlo (35-1-1, 19 KOs). The 31-year-old started sitting down on his shots, throwing power shots that were taking their toll Castano, and setting everything up with the jab. Castano had no answer as to what to do, and his activity started to slow as the fight entered the championship rounds.

In the tenth round, Charlo and Castano were in close range when the former landed a short left hook. It appeared Castano ate the blow well, but it was a delayed reaction and the native of Argentina went to the canvas. Castano made it back to his feet, but he was shaky and all over the place. The fight should have been stopped at that point, but the referee let it continue. Charlo smelled blood in the water and pounced like a shark.

A right hand sent Castano back to the ropes. Charlo closed the show with a left uppercut which lifted Castano off his feet. The next and final blow was a left to the body that sent Castano packing and we have the first four-belt champion at 154 pounds.

Here is what happened at Jermell Charlo vs. Brian Castano 2.

facebook twitter whatsapp
Charlo def. Castano via knockout in the tenth round to become the undisputed super welterweight champion and become the first fighter in the four-belt era to hold all four belts at 154 pounds.

Charlo stops Castano in RD 10 to become the first ever 154-lb undisputed champ in the 4-belt era. #CharloCastano2 pic.twitter.com/Fy81yrXTBp

In the final 30 seconds, a left catches Charlo's attention. They slug it out until the final bell. Great end to the round. (10-9 Charlo, 39-37 Charlo)

facebook twitter whatsapp
Charlo is starting to be more aggressive. He's pumping the jab. A right and a double left hook from Charlo. Body shot from Castano but Charlo counters with a right. Double jab from Charlo and then a left from Castano. Each guy throws, but Castano sends Charlo back with a left and a double jab. Left hook to the body by Charlo. A left hook stuns Charlo. Charlo comes back with a double left hook. Great way to start things. (10-9 Charlo)

Finally it's time for the main event

facebook twitter whatsapp
Both Charlo and Castano are getting their robes on. Pretty absurd Castano arrived late and they haven't made their respective ring walks out.

Ennis def. Clayton via knockout at 2:49 of the second round.

Clayton ducked down and Ennis unloaded an overhand right to send Clayton down for the first time of his career. Clayton got back to his feet but the referee waved it off.

Great performance from Ennis as he's now unbeaten in 30 fights (29-0-1, 27 KOs). Time to put someone of significance for Ennis. We still don't know how good he really is.

facebook twitter whatsapp
The co-main event of Charlo vs. Castano 2 has Jaron "Boots" Ennis (28-0, one no-decision, 26 KOs) squaring off with Custo Clayton (19-0-1, 12 KOs) in welterweight action.

A significant test for Ennis on a big card. Let's see if he can deliver.

I agree with 96-94, but the first two scorecards are wider than expected. Hopefully, not a sign of things to come as the main event inches closer.

Jermell Charlo is in the house

facebook twitter whatsapp
Welcome to DAZN's live coverage of the rematch between Jermell Charlo and Brian Castano for the undisputed super welterweight championship. History should be made, so stay locked in for live updates, results, and highlights.