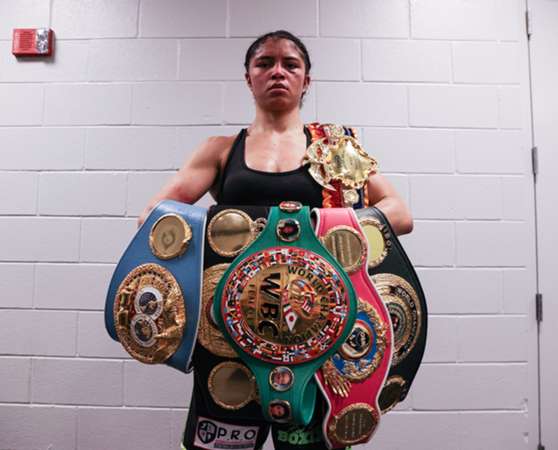 Matchroom
Watch Zurdo vs. Boesel this Saturday live on DAZN

One of the top women's pound-for-pound fighters returns for her 2022 debut.

Saturday, June 25, was already a loaded show with three championship fights on the docket. Now, another is on the books, and it features one of the top women's pound-for-pound boxers.

Undisputed women's welterweight champion Jessica McCaskill makes her 2022 debut as she puts all four belts on the line when she takes on Alma Ibarra from the Tech Port Center + Arena in San Antonio. You can watch the entire fight card exclusively worldwide on DAZN.

McCaskill (11-2 4 KOs) ripped the straps from long-standing ruler Cecilia Braekhus in August 2020 and saw off the Norwegian in a rematch for her first defense in March 2021. The native of Chicago recorded the fourth stoppage win of her career in the second defense of the belts in December, ending Kandi Wyatt’s challenge in the seventh round. She will now face the tough test of Ibarra.

“Everyone is coming for the throne, and it’s my job to protect it,” McCaskill said in a press release.

Ibarra (10-1, 4 KOs) has also beaten Wyatt in an eight-round decision in an eliminator for the WBA strap, dubbed the ‘Thrilla for Caskilla’, landing her the shot at McCaskill’s WBA, WBO, WBC, IBF and Ring Magazine titles.

“I've won fights. I've lost fights. I've been on the big stage. I've fought for a world title. I'm a single mom. I've been kidnapped. There's not one thing that she can bring to the fight that I haven't seen and surpassed,” Ibarra said. “She's just holding what's mine. I'm here to take them."