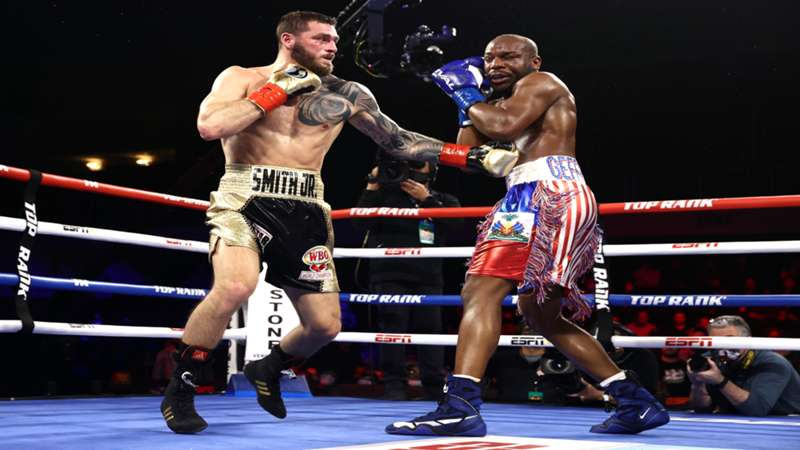 WBO light heavyweight champion Joe Smith Jr. could have easily looked past Steve Geffrard on Saturday night, and no one would have blamed him in the slightest bit. But, instead, he went through two different opponents, losing two of them to COVID-19, and took the Geffrard fight on eight days notice. A sluggish performance or a shocking defeat would have cost him unification bouts with Artur Beterbiev and Dmitry Bivol.

Instead, Smith surprised people by boxing in the early. But "The Beast of East" lived up to his moniker by being the aggressor and using his power, which resulted in a 16-punch combination to send Geffrard to a knee and forced his corner to wave the fight off at the 0:37 mark of the ninth round at Turning Stone Resort Casino in Verona, N.Y. to retain his championship. DAZN News had the fight scored 80-72 for Smith at the time of the stoppage.

Smith (28-3, 22 KOs) controlled the majority of the fight. The 32-year-old began the contest doing the unconventional and was boxing and slugging. Then, when he went to his patented power shots, Geffrard kept a high guard, which worked for the first couple of rounds. But Geffrard didn't take advantage of his strategy and would throw only in short spurts, which played into Smith's hands.

Smith found an opening in Geffrard's armor, the body. The New York native started pounding the body with digging hooks. Once Smith made it a point of emphasis, it left Geffrard vulnerable upstairs, which was the opportunity Smith needed. Smith was relentless upstairs and didn't let up until he sent Geffard to the canvas and the challenger's corner finally called it a day.

Here is what happened at Joe Smith Jr. vs. Steve Geffrard.

Smith def. Geffrard at 0:37 of the ninth round to retain the WBO light heavyweight championship.

Smith came out blasting a left hand that sent Geffrard into the ropes.

Smith got Geffrard into the corner and unleashed a 16-punch flurry that forced the challenger to take a knee after a left hook. Geffrard didn't look like he was getting up. When the count got to nine, Geffrard's corner told the ringside doctor their fighter wasn't going to continue and Smith successfully defends his title for the first time.

facebook twitter whatsapp
Before the round, Geffrard tells trainer Kevin Cunningham that his shoulder is in pain and is only fighting with one arm. Three-punch combo to begin things for the champion. Halfway through the round, Smith has seemed to take his foot off the gas pedal. Double left uppercut for Smith. Nice right uppercut down the middle from Smith. Don't know how Geffrard didn't see that coming. (10-9 Smith, 80-72 Smith)

facebook twitter whatsapp
Double left hook by the champion. Hard right to the body by the New York native. Smith connects on a left uppercut and a thudding body shot to the liver. Felt that one from here. Four-punch combo from Geffrard. Needs plenty more of those. (10-9 Smith, 60-54 Smith)

facebook twitter whatsapp
Hard left to the body from Smith. Beautiful slip from Smith to dig in on the blow. Stinging left by Geffard followed by a four-punch combination. Straight right lands for Geffrard. Best round of the fight thus far for the challenger.

Straight right does damage for Smith. A winging right for Smith as he unleashes a barrage as he tries to finish off Geffard but runs out of time. What a comeback for Smith to steal the round in the final 45 seconds. Could it be the beginning of the end for the late replacement? (10-9 Smith, 50-45 Smith)

facebook twitter whatsapp
Double jab and straight right connects for Smith. Combination from Geffrard. A double jab from Geffrard. Hard right to the body from Smith. Uppercut down the middle by the champion. An onslaught from Smith and Smith finishes off the round, clipping him with a right hand. Another big uppercut down the middle by Smith to end the round. (10-9 Smith, 40-36 Smith)

facebook twitter whatsapp
Smith is trying to box and Geffrard peppers a triple jab for his troubles. A right hand around the guard staggers Geffrard for a moment. Straight right hand down the middle for Geffrard. Needs to do more of that as he's being too conservative. Three-punch combination to the body by Smith to end the round. He can't win a boxing match. Needs to continue to be the aggressor and throw with power. (10-9 Smith, 30-27 Smith)

facebook twitter whatsapp
Smith comes out firing to begin the second with a barrage of shots to send Geffrard into the ropes with a high guard. Hard right hook to the body from Smith. That's the shot Smith needs to capitalize on. It's there all day for Smith because of Geffrard's tight guard. (10-9 Smith, 20-18 Smith)

facebook twitter whatsapp
Smith walks right now with a straight right hand and a right uppercut down the middle. Geffrard comes in with a sneaky left hook. Triple jab for Geffrard. An exchange of lefts. Short left uppercut lands for the champion. Seven consecutive power shots from Smith at the end of the round gives him the edge after one. (10-9 Smith)

A lot is on the line for Smith. Geffrard has everything to gain and nothing to lose. He isn't supposed to be here. A win for Smith puts him in line for significant fights.

Can Smith stay focused? Does Geffrard upset the apple cart? We are about to find out.

After a shaky first round where Nova got clipped by a right hand, the native of Puerto Rico took control from there. He boxed, he brawled, and showed a little bit of everything. Nova kept battering Encarnacion to the body with left and right hooks and demolished him upstairs with one blistering left and right hooks after another. Then at the beginning of the eighth round, a short right hook stopped Encarnacion in his tracks. Encarnacion's corner saw enough and told the ringside doctor to stop it.

Great job by Nova. He came back from adversity and put the pedal to the medal to remain undefeated (21-0, 15 KOs).

facebook twitter whatsapp
After the fourth round, Nova's corner told him to pound the body more and go upstairs. He listened as he had more pop in the fifth. You could the gloves pounding Encarnacion's body and then proceeding to go upstairs and unleash right hands. Encarnacion doesn't have an answer and needs one in a hurry as it's only matter of time at this point.

facebook twitter whatsapp
Nova and Encarnacion providing a good fight thus far. Shockingly, Encarnaction is hanging in there and landing some hard shots to let Nova know he isn't going anywhere. Nova is working off the jab and going to the body with a digging left hook and an overhand right. Let's see what Nova can do as he needs to be a bit more active.

facebook twitter whatsapp
Welcome to DAZN News' live coverage of the WBO light heavyweight title fight between champion Joe Smith Jr. versus Steve Geffrard. It should be an exciting fight but lets see what goes down as anything can happen in boxing. So grab the refreshments, go to the bathroom and enjoy an exciting night of action.