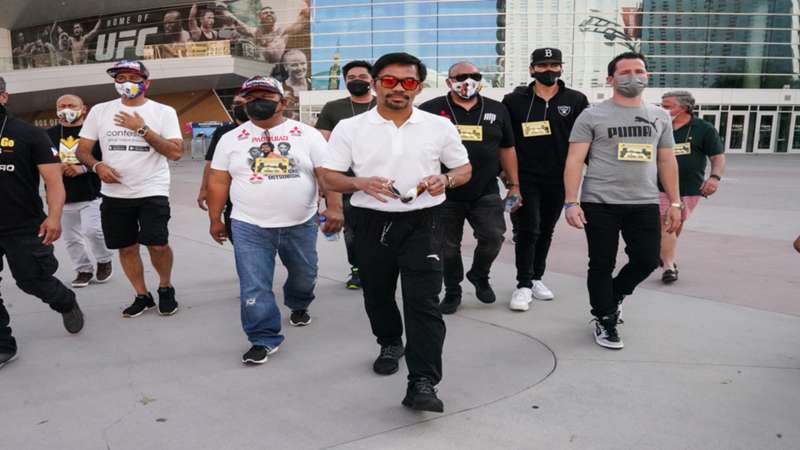 Will Manny Pacquiao really walk away?

LAS VEGAS - One of the most intriguing storylines heading into Manny Pacquiao's challenge of Yordenis Ugas for the WBA (super) welterweight championship is the possibility of retiring win, lose, or draw after the fight.

In the buildup to Saturday's fight, Pacquiao hadn't given a definitive answer to the question when asked, only to say it could be. Some people wonder if he'd really step away if he beats Ugas because it isn't the marquee fight of an Errol Spence Jr., Terence Crawford, or Floyd Mayweather Jr. But you could also understand if Pacquiao decided to hang up the gloves because he is 42, and has been contemplating a run to become the President of the Phillippines.

On Tuesday, during his grand arrival at the Toshiba Plaza, the "Pac-Man" had the chance to give a definitive answer. From the sound of things, Pacquiao is leaving the door open if he unseats Ugas to become the WBA (super) titlist once again.

"All I can say is there could be more," Pacquiao said. "I’m turning 43 this coming December. My plan is one at a time. Let’s focus on this (Ugas) first and talk about the next fight if there’s another fight. It depends on the fight. I love doing this. I’m happy doing this. My feeling right now is I feel like when I was young at an early age of 20. I’m so excited and happy. It still feels the same. I’m still so passionate for the sport."

When Pacquiao's original opponent, Spence, bowed out of the fight, Ugas was inserted from the co-main event into the headlining position. One of the differences between Spence and Ugas is the speed factor. The prevailing thought is Pacquiao went from having a slight advantage to a sizable one in that department. The idea is that it will be too much for Ugas to overcome. But Pacquiao isn't so sure of that notion.

"As a boxer, if you have speed and power, you can use it on all your opponents," Pacquiao said. "It’s your advantage because you can control the fight and do whatever you want to do, and it’s easy to see."