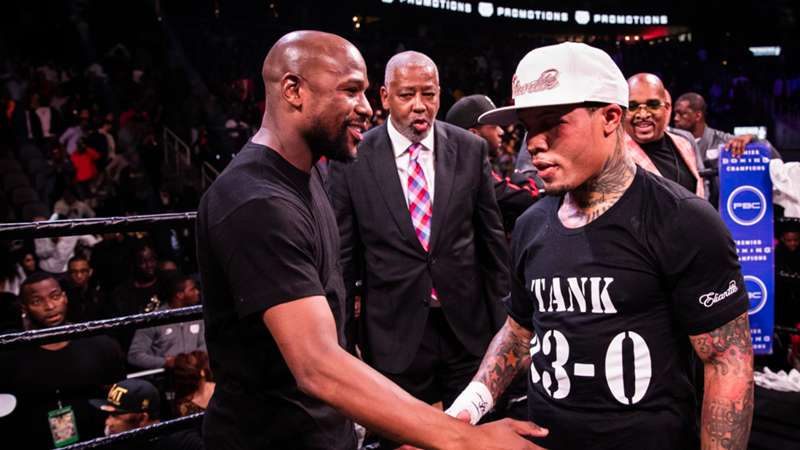 Floyd Mayweather Jr. could work the corner for Gervonta Davis against Leo Santa Cruz, but first he will discuss the matter with head trainer Calvin Ford.

Floyd Mayweather Jr. is yet to decide if he will work Gervonta Davis’ corner when Davis fights Leo Santa Cruz.

Santa Cruz’s head trainer, Calvin Ford, and Mayweather will discuss the possibility of the retired boxing legend being part of his corner team.

In his most recent fight against Yuriorkis Gamboa, Mayweather was ringside and offered advice from the sidelines. Gamboa was ultimately stopped in the 12th round as Davis became the WBA world lightweight title.

Davis has not fought since last December and has been training at Mayweather’s Las Vegas gym as he prepares for his next fight. Both Davis’ world championship at 135 and Santa Cruz’s WBA 130lb championship are on the line.

“I haven’t spoke to Calvin yet. But in the gym, me and Calvin work hand [in] hand,” Mayweather told a virtual press conference.

“You know, sometimes I have to leave and fly away to take care of business. But when I’m back, I’m there to give him, you know, just pointers, talking to him about pay-per-view and how things work.”

RT @MayweatherPromo: In 6 days sparks will fly with two titles on the line, @gervontaa vs. Leo Santa Cruz PLUS! A stacked undercard. You don’t want to miss this.

Mayweather explained the level of commitment that he was looking for from Davis.

“Sometimes when a guy is in a boxing gym, and he’s had hard work throughout that day, sometimes a guy don’t wanna work.

Speaking to the press, Davis told journalists why he elected to train exclusively at Mayweather’s gym.

“As far as, you know, getting ready for this fight, I feel as though I wanted to bring my camp to Las Vegas and train more than eight weeks or a six-week camp because I know that I’m fighting a top-notch fighter.

“We know Leo coming to fight. He’s bringing pressure. He’s a high-volume fighter, puncher, you know, so I brung my camp here to stay focused on just boxing.”

Speaking to Showtime’s All The Smoke, Davis claimed that another factor in his decision was to ensure an improvement of his last showing in his fight against Gamboa, even though he knocked his opponent down three times.

“I watched the Gamboa fight a couple of weeks later and I turned it off. That wasn't my best performance,” Davis said.

“That's why now, I moved my training camp to Las Vegas so I can be able to put on a better performance. I think that was bad for my fans. I'm definitely coming back stronger and better. I will make it up for my last fight.”