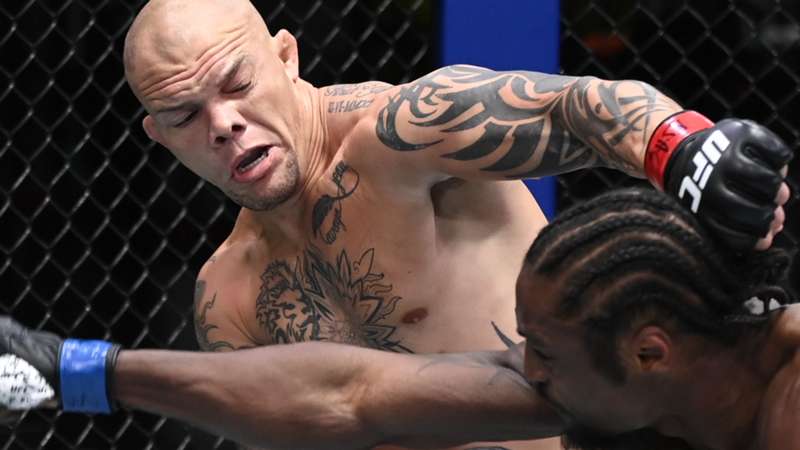 Anthony Smith warned that his fellow light heavyweights "are in trouble" entering Saturday.

He then made Ryan Spann tap out to a rear naked choke for a first-round submission in the main event of UFC Fight Night from the UFC Apex in Las Vegas. The submission came after a dominant standup game from Smith, who buckled Spann with piercing left hooks and dropped him with powerful rights before ending the fight for his third straight victory.

"He's got the skills. It's just, I think I'm better," a victorious Smith said in the Octagon following his one-sided win. "And that was the gameplan, be better at every position."

Smith put Spann on notice of his power with a left hook across the jaw in the opening minute. Moments after that, another left hook buckled Spann, before a lunging right dropped "Superman" with a thud. Despite Spann making it back to his feet, Smith launched another left that badly wobbled him before another huge right across the jaw made him taste the canvas yet again.

The veteran "Lionheart" proceeded to flatten Spann out before swiftly taking his back and cinching in a rear naked choke, which Spann tapped out to almost instantly.

Following the dominant win, Smith and Spann had to briefly be separated by security as the former made sure to verbally rub his victory in. However, cooler heads prevailed as they later embraced in a showing of respect.

Smith called out Aleksandar Rakić for a rematch moments after that.

Rakić took to his Twitter account and made sure to let Smith know that he's available to run it back.

When Smith was informed about Rakić's tweet, he was elated.

"Merry Christmas to me," Smith said.

Rakić scored a unanimous decision over Smith back in August 2020.

facebook twitter whatsapp
Smith with a leg kick to open the fight. Spann pumps a double jab with the left. Smith cracks Spann with a left and Spann returns fire the other way. Big exchange. Spann lifts Smith off the mat and carries him across the Octagon, showing some "Superman" strength. Smith drops Spann with a thunderous right hand. Moments later, he drops Spann with another right hook. Both times, Smith set it up by buckling Spann with a left hand. Smith takes Spann's back, applies a rear naked choke and Spann taps. "Superman" Spann just found his Kryptonite in the form of "Lionheart" Smith.

Ryan Spann is making his walk to the Octagon right now, having won nine of his last 10 fights.

Spotlight is on Superman ✨

facebook twitter whatsapp
Judges score it 30-26, 29-26 and 29-27 in favor of Cutelaba. "The Hulk" was too savage for Clark tonight in Las Vegas. Dominating performance. "Easy money" Cutelaba says in the Octagon, celebrating his victory.

Cutelaba vs. Clark; Round 3

facebook twitter whatsapp
Doctors checking Clark's bottom teeth in between rounds. He's going to need to see a good dentist following this bout. Cutelaba grabs hold of Clark's right thigh and sweeps his left leg from underneath him for his sixth takedown of the fight. Cutelaba is dominating in all facets of the fight game. Another takedown follows. Smart, dominant fight from Cutelaba, who's getting it done with power shots as well as technically. Two minutes left. Cutelaba is putting all his weight on Clark, leaning on him. They're back on their feet, where Clark swings and misses but lands on top of Cutelaba. He tries to blast Cutelaba with short punches — some of which are landing, some missing. Clark swinging for the fences but too little, too late. (10-9 Cutelaba, 30-26 Cutelaba)

Cutelaba vs. Clark; Round 2

facebook twitter whatsapp
Cutelaba works into full mount just 90 seconds into the round. Big elbows and punches. Clark is in trouble. They're back up and in the clinch, where Cutelaba finds just enough wiggle room to blast Clark with a knee. And another. Cutelaba with a takedown and standing grapple moments later to close the round. (10-9 Cutelaba, 20-17 Cutelaba)

Cutelaba vs. Clark; Round 1

Immediate takedown from Clark, but they're already back on their feet with Cutelaba pressed against the Octagon. Cutelaba with a thudding body kick moments later. A stiff, lunging left hand brushes Cutelaba back now as he's on notice of Clark's power. Knee from Cutelaba seconds later. O-M-G! Cutelaba crumples Clark with a right hand that actually hits Clark in the back of the head. Clark was rolling with the punch, as it wasn't intentional from Cutelaba, who's bringing the heat with a vicious elbow across the face and some more ground and pound. Cutelaba nearly finishes the fight, but Clark toughs it out to survive. (10-8 Cutelaba)

How did he survive this 🤯 #UFCVegas37 pic.twitter.com/mlArHL8DQv

facebook twitter whatsapp
Ion Cutelaba vs. Devin Clark are moments away from being locked in the Octagon. Ready for "The Hulk" and "Brown Bear?"

facebook twitter whatsapp
Judges all have it 30-27 in favor of Lipski, who simply overwhelmed Bohm with too much striking. The "Queen of Violence" delivered 128 total strikes to Bohm's 43 toward the big win.

Lipski threatens finish in second round

During the waning seconds of the frame, Lipski drops Bohm with a right hand and tacks on some short punches for good measure.

She's in firm control heading into the third and final round.

facebook twitter whatsapp
Lipski is living up to her nickname through round one by dominating the striking action.

Tsarukyan with a statement win

Tsarukyan wanted an exclamation point victory and he got just that! Tsarukyan crashes a left hook across Giagos' jaw and pounces on him with a plethora of punches until the bout is halted for an impactful first-round TKO.

Arman Tsarukyan got the finish he was calling for 🔥 #UFCVegas37 pic.twitter.com/y2qVym6ZgO

If it wasn't all the way clear before, it should be clear now — Tsarukyan is a problem out here!

The Russian then calls out Dan Hooker.

Lightweights about to throw down

facebook twitter whatsapp
Arman Tsarukyan is extremely confident that he'll have his hand raised in victory tonight. Christos Giagos enters the bout having won four of his last five fights.

Maness went from almost being finished at the end of the first round to finishing Gravely in the second. Maness unloaded a right uppercut and connected flush on the chin, dropping Gravely in a heap. He then put the finishing touches on Gravely via a barrage of hard short right hands for the stunning, comeback TKO.

Maness saved by the bell

Gravely clobbered Maness with a pulverizing right hook, dropping him against the Octagon. Gravely immediately started piling on with more punches before Maness was saved by the bell at the end of the first round.

SAVED BY THE BELL!?!? 😳@TonyGravely135 dropped a bomb to end the round. #UFCVegas37 pic.twitter.com/I8mqaNiPZp

A few more seconds and Gravely would have finished the show. Let's see how Maness responds in the second.

Bantamweight action is upon us

facebook twitter whatsapp
Nathan Maness vs. Tony Gravely is moments away. Only one could make it three straight in the Octagon.

Buckley finishes Arroyo in a flash!

Oh my! Buckley unloads on a right hook, which lands partially behind Arroyo's head and the American adds a short right uppercut to drop the Brazilian with a thud. Some hammerfists finish it with punctuation. Just like that!

Needing a finish, @NewMansa94 gets it done in the 3rd 🔥🔥🔥 #UFCVegas37 pic.twitter.com/DUJm5T4Cwu

Hard-fought third-round TKO for Buckley, who's sporting a mean hematoma on the right side of his forehead. During his post-fight interview, Buckley asks Dana White for a sitdown talk.

Buckley somehow eats it and presses Arroyo against the Octagon, securing double underhooks. But damn did that knee connect in the second round. The most significant strike of the fight thus far.

facebook twitter whatsapp
A switch kick and up kick from Arroyo definitely grabbed Buckley's attention during the first round. Thanks to his four-inch height advantage, Arroyo can launch kicks from a distance and evade counters from Buckley. He also nearly took Buckley's head off with a jumping knee that just missed.