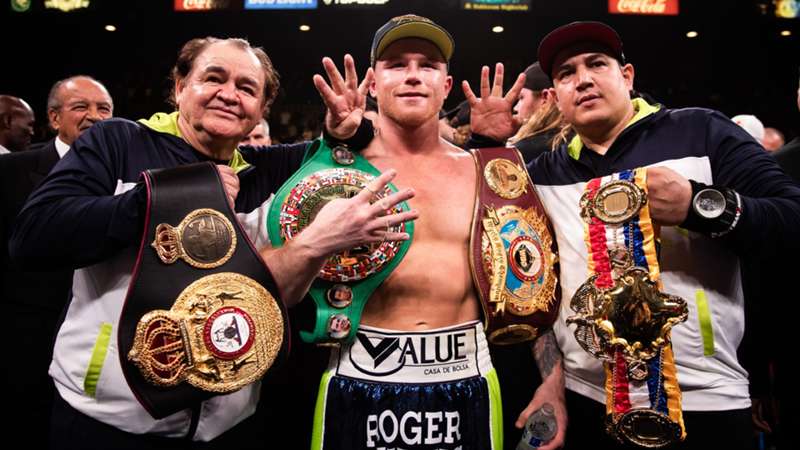 (Amanda Westcott/DAZN)
Check your region for Canelo vs. GGG 3 on DAZN

We take a look at the impressive resume Saul "Canelo" Alvarez has built up to this point in his career.

Canelo Alvarez is quite arguably the biggest boxing star in the world.

Alvarez, 32, has been boxing professionally since he was 15 years old. He has won multiple world titles in four different weight classes, including his most recent fight, when he jumped up two weight classes in November and knocked out Sergey Kovalev in the 11th round to win the WBO light heavyweight title.

In October 2018, Alvarez signed a five-year, 11-fight contract worth at least $365 million with the sports streaming service DAZN. The deal was the biggest in sports at the time (Los Angeles Angels outfielder Mike Trout would later sign an 12-year, 426.5 million deal). Alvarez's deal eclipsed the terms of Floyd Mayweather Jr.'s six-fight, 30-month contract with Showtime that had a guarantee of $200 million, although Mayweather earned additional money from the PPV revenue generated from the deal.

Here's a look at what Alvarez has done up to this point in his historic career.

Everyone has to start somewhere. For Alvarez, his pro debut took place on Oct. 29, 2005 at Arena Chololo Larios in Tonala, Mexico against Abraham Gonzalez. Alvarez garnered the first win and stoppage of his career, beating Gonzalez by fourth-round TKO.

In the first 40 fights of his career, Alvarez hadn't really faced a name fighter that would resonate with the American audience. He got that opportunity when he was featured on the undercard of Floyd Mayweather Jr.'s showdown with Miguel Cotto, clashing with three-division world champion and future Hall of Famer Shane Mosley.

Alvarez made easy work of Mosley, winning a lopsided unanimous decision to retain his WBC junior middleweight title for his first signature win.

There were several questions heading into Alvarez's bout with Miguel Cotto: How would Alvarez handle the pressure of a big fight coming off his first-career loss, against Mayweather? What did he learn from the Mayweather fight? How he would handle fighting for the first time in his career above 154 pounds?

Those questions were all answered in emphatic fashion as Alvarez matured and became a more complete boxer against Cotto. Alvarez showcased improvements both offensively and defensively as he utilized his proficient counterpunching to propel him to a unanimous decision victory and the WBC middleweight championship.

The fight did better than expected on PPV, generating more than 900,000 buys and $58 million at the time to become the first event not headlined by Mayweather, Manny Pacquiao or Oscar De La Hoya to do over 900,000 PPV buys.

This fight made Alvarez one of the top stars in the sport, as it showed he could carry the load and deliver numbers that only a select few could do.

Questions surrounded Alvarez coming into the rematch with Golovkin. Many felt Golovkin did enough to win their first fight in September 2017. Alvarez's reputation was also on the line after receiving a six-month suspension for a pair of failed drug tests in February 2018, which postponed the second clash from May to September.

Instead of allowing Golovkin to be the aggressor, Alvarez altered his counter-punching style and showed a willingness to stand toe-to-toe with GGG, as he met his rival in the middle of the ring and slugged it out with him from the opening bell.

Alvarez was able to walk down GGG during several key moments of the fight and pounded the body with his signature left hook. The nip-and-tuck affair was tightly contested as both had their moments, but Alvarez's shift in the game plan and aggressive approach earned the majority decision nod to capture the WBA (Super) and WBC middleweight belts.

Alvarez had three of the four major middleweight world titles at middleweight. But instead of trying to become the undisputed 160-pound champion, Alvarez dared to make more history by jumping up two weight classes to battle WBO light heavyweight champion Sergey Kovalev.

Kovalev had reigned supreme over the 175-pound division for the majority of the decade, but his better days were behind him. Kovalev performed better than expected by utlizing the jab to perfection and having Alvarez on the ropes. Ultimately, though, Alvarez's power showed it could have an effect 15 pounds above his usual fighting weight, as he knocked out Kovalev to become a four-division world champion.