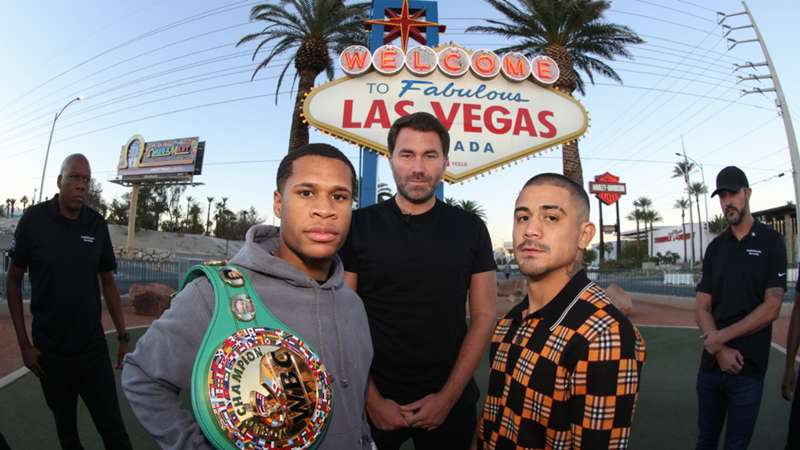 Matchroom Boxing
Check for Haney-Diaz on DAZN in your country

Things get heated at the end of the Devin Haney and Jo Jo Diaz press conference.

LAS VEGAS — Devin Haney takes another step up in competition on Saturday when he puts his WBC lightweight title against JoJo Diaz from the MGM Grand Garden Arena.

Haney returns after coming through the toughest test of his career with Jorge Linares at the end of May. Linares rocked Haney at the end of the tenth round. But "The Dream" survived the round and went on to win via unanimous decision. Diaz made a successful debut at 135 pounds in July, defeating perennial contender Javier Fortuna by unanimous decision.

Before they step inside the ring, Haney and Diaz met on Thursday at their pre-fight press conference. The presser ended with Haney and Diaz facing off. Neither guy gave an inch as they went nose-to-nose. A member of Diaz's team kept trying to get Diaz to walk away but to no avail. Haney and Diaz kept chirping at one another until they were pulled away.

It had been a cordial presser between the top lightweight fighters, but things started getting heated when Haney and Diaz were given the microphone to say a few words. Haney perked up when Diaz said he wants to beat the s— out of out Haney and take his 'soul.'

When given the stick, Haney let the challenger know that he knows what Diaz is going to do once they step inside the ring.

"Me and my team know JoJo better than his own coach and dad," Haney said at the presser.

Here is what happened at the Devin Haney vs. Jo Jo Diaz press conference.

Haney and Diaz went nose to nose with neither guy backing down. Diaz kept getting pulled but wouldn't budge. Finally, Diaz backed up a bit but they were still trash-talking one another.

No extra pressure for Devin Haney

facebook twitter whatsapp
Haney feels he has nothing extra to prove based on what happened with Kambosos-Lopez and he's just got to be Devin Haney.

Kambosos wants to be dazzled this weekend

facebook twitter whatsapp
Kambosos says he's on a scouting mission and is excited for Haney-Diaz and Tank Davis vs. Issac Cruz. Said he's in the driver's seat in the lightweight division. Of the notion that he wants to be impressed and wants the biggest fight possible. Wants his first title defense to be in his native Australia and fill an 80,000-seat stadium.

The unified lightweight champion has arrived.

Said he's fresh and doesn't feel like the Teofimo Lopez fight was a hard one.

facebook twitter whatsapp
The rising heavyweight prospect is wondering why the top heavyweights like Andy Ruiz Jr., Michael Hunter and Charles Martin have turned down fights with him. Tells Eddie Hearn that he's the best promoter in the world and knows he'll get him the fights he's looking for.

facebook twitter whatsapp
Kandi Wyatt is stepping up on short notice to take on undisputed women's welterweight champion Jessica McCaskill. Wyatt makes it clear she isn't here to be a stepping stone.

"I'm here to win and it's going to be fireworks," Wyatt said. "I've been dreaming about this since I was 10 years old."

The return of Ammo Williams

facebook twitter whatsapp
Ammo Williams, who faces Quatavious Cash on the undercard, says he's had the greatest camp of his life heading into Saturday. Feels he's going to bring the fireworks this weekend.

Marc Castro in the building

facebook twitter whatsapp
Rising prospect Marc Castro is on the stage as he takes on Ronaldo Solis on the undercard. He's looking forward to competing in Las Vegas for the first time.

facebook twitter whatsapp
Welcome to DAZN News' live coverage of the Devin Haney vs. Jo Jo Diaz Jr. press conference. DAZN News is inside the building and will have the latest updates.