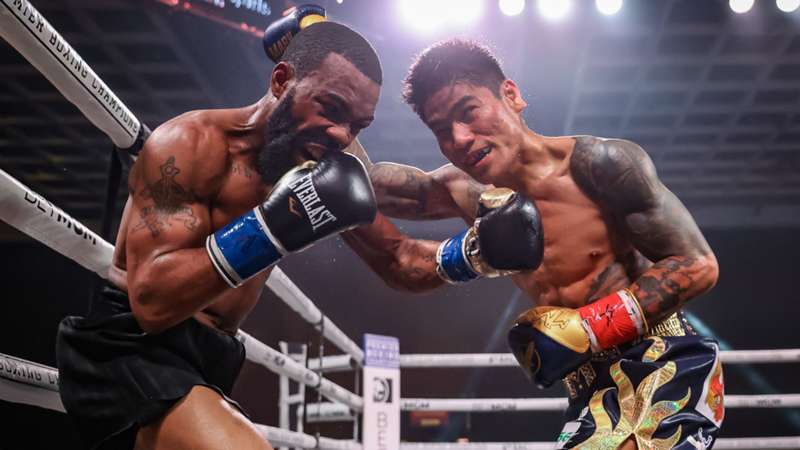 This time around, Gary Russell Jr.'s inactivity will be justified.

The former WBC world featherweight champion will need time to treat his injured shoulder after losing the title in an upset loss to Mark Magsayo over the weekend. But if there's ever a moment that a world champion should gain fans and popularity from a loss, it was Russell on Saturday night.

He told DAZN News last Tuesday afternoon that he was entering the bout with a "slight injury." Following his loss, Russell told Showtime's Jim Gray "I believe I have a torn tendon in my right shoulder" and he tacked on that he suffered the injury while in training camp two weeks prior to the bout.

So, why did Russell go through with the fight instead of postponing it?

"This is what true champions do," Russell continued telling Gray.

He added: "I'm a true champion. This is what warriors do. I fight regardless of what the situation is. I refuse to not compete and display my skill set."

Replays from the fight showed that Magsayo detonated an overhand right to Russell's right shoulder in the fourth round and that might have reaggravated the injury and totally compromised the former champ, leaving him to fight with just his left arm over the next eight rounds.

In fact, Russell completely abandoned his jab from the fifth round on.

And all that being said, Russell still won rounds on pure ring IQ, savvy and heart. Plenty of heart.

Prior to that fourth round, the 33-year-old Russell was being outworked by the younger Magsayo and his relentless output.

But after having his right arm compromised, Russell bit down and started mentally digging his way back into the fight. Somehow, Russell found a way to slow the fight down, bring the scrap to the middle of the ring, posture and land clean, crisp shots with his left hand. Not only did he slow the fight down, he dulled Magsayo down within it over several rounds.

That high punching volume that the Filipino fighter was touting earlier in the bout was sort of stifled in the middle rounds of the bout. And Magsayo, 26, looked a bit winded at times frankly.

By the bout’s final bell, Russell had taken what looked to be a lost cause due to his injury and placed it in judges’ hands.

Not bad for an injured fighter who basically coached himself through training camp due to his father and longtime trainer, Gary Russell Sr. suffering through health issues of his own.

The boxing world took notice of Russell’s mettle and showered him with praise.

Win, Lose or Draw. Big respect to G. Russell. Getting through that fight with one arm is way harder than people think. Bro is mentally tough.

I respect Gary Russell fighting thru that injury last night.. A lot of fighters would have tuck they heart!

Not taking anything away from Magsayo, who drowned Russell out with punching volume and did what he was supposed to. That said, he never came close to stopping a boxer who was fighting with one arm.

Russell landed clean shots and made the bout interesting with one arm. With that right to set up that left, “Mr.” Gary Russell Jr. might have very well remained the longest-reigning world champion in boxing.

Prior to the loss, Russell was maligned for only making one title defense per year from 2016-2020 and having a nearly two-year layoff before entering the ring with Magsayo.

Now, critics and fans alike will be more understanding of a lengthy absence that a shoulder surgery or just time off to heal would warrant. But whenever Russell returns to the ring, it could be with more fans by his side.

Not to mention, a redeeming result if granted a rematch with Magsayo.