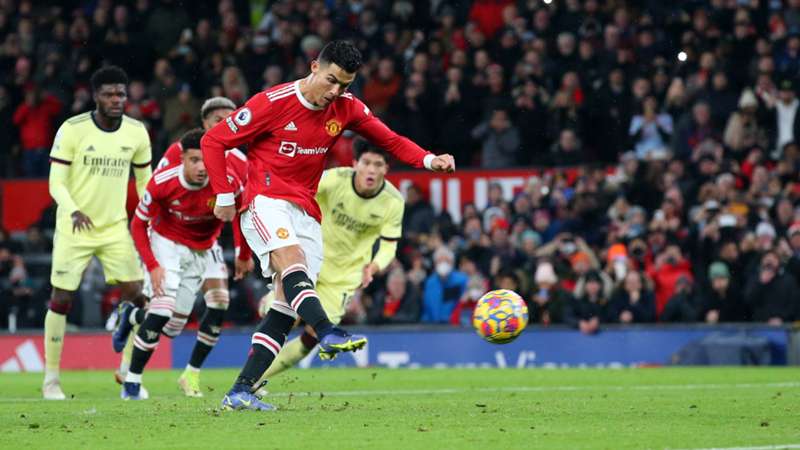 The Red Devils came out on top after a rollercoaster match at Old Trafford.

The Michael Carrick era at Manchester United ended on a high note as the Red Devils secured a 3-2 victory over Arsenal on Thursday, with Cristiano Ronaldo scoring his team's final two goals.

It was actually Arsenal that got on the scoresheet first, however, with Emile Smith Rowe taking a headed pass from Mohamed Elneny and firing a long-distance shot past a prone David de Gea in the Manchester United net in the 13th minute. De Gea was knocked over by his teammate Fred when the Red Devils were defending an Arsenal corner, and the goalkeeper remained on the pitch as Smith Rowe's effort curled into the lower-left corner.

Thursday's opener was the ninth straight goal scored by a visiting team at Old Trafford, but United made sure to put an end to that streak in the closing moments of the first half. After Ronaldo and Harry Maguire forced routine saves out of Aaron Ramsdale early in the half, Bruno Fernandes managed to get the ball past the Gunners 'keeper in the 44th minute. The home side put together a nice bit of interplay down the left hand side, passing through the Arsenal defence until the ball found its way to Fernandes for a quick, low shot from just outside the six-yard box.

Ramsdale was then called into action minutes into the second half as Ronaldo cut past Thomas Partey and fired a close-range effort that required a good reaction save to keep the match on level terms.

However, Ronaldo would get the better of the Arsenal goalkeeper in the 52nd minute after the visitors turned the ball over at midfield, allowing Marcus Rashford to stroll down the right flank unencumbered before finding his superstar teammate with a cross that was easily knocked in.

The goal was the 800th of Ronaldo's career so far, and it drew a rousing applause from the appreciative Old Trafford crowd.

With the crowd still buzzing, Arsenal went to work toward getting the equalizer — and found it just two minutes after Ronaldo's strike. Keeping possession from the kick-off, the Gunners probed down the left side before switching play to the right wing, where Gabriel Martinelli collected a cross-field pass and quickly drove the ball into United's penalty area. It found Martin Ødegaard near the penalty spot, and the 22-year-old used similar technique to Ronaldo to side-foot the ball past a number of players and into the lower left corner of the United net.

The teams traded half-chances for a spell until Fred was hauled down inside the Arsenal 18-yard box by Ødegaard in the 68th minute. The referee inititally waved play on, but a minute later the VAR called for a review of the incident and it was determined to be a penalty. Ronaldo stepped up to take the ensuing spot-kick and drilled his shot right down the middle, however Ramsdale had dove to his left and could only watch as the winning goal flashed by him.

The final 20 minutes saw United defend everything the visitors could throw forward as the Red Devils held on for a crucial victory that sees them climb to seventh place in the Premier League standings.

With Thursday's match in the books, Carrick now makes way for incoming interim manager Ralf Rangick having guided United to two wins and a draw across the Premier League and Champions League.