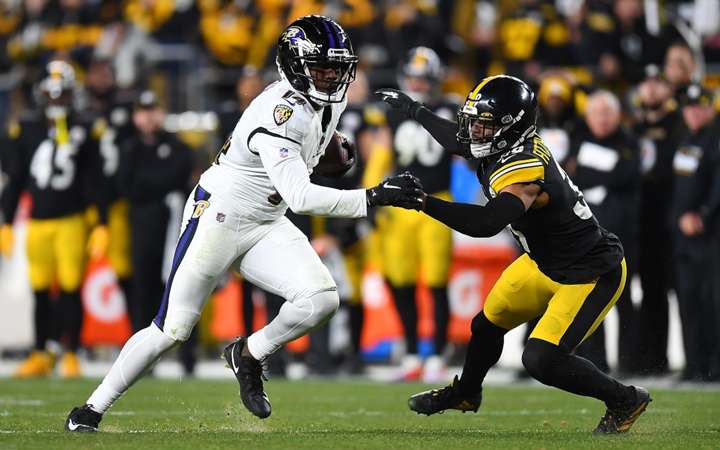 The division rivals meet in Maryland with the hope of reaching the playoffs.

It's always expected that either or both the Baltimore Ravens and Pittsburgh will reach the postseason, but this time around, both AFC North stalwarts are at risk of missing out altogether.

In addition to a win, both teams need other games to go their way, but the fact a win over a division rival could land a place in the playoffs at the other's expense adds another element to what is always an entertaining encounter.

When the two franchises met last month, it was the Steelers who edged past the Ravens 20-19. John Harbaugh's team managed to score a touchdown in the dying seconds of the game, but instead of opting for the extra point and force overtime, he decided Lamar Jackson and his offence should go for a two point conversion. Unfortunately for the Ravens, Jackson failed to connect with tight end Mark Andrews as the game clock expired.

Once this week 18 encounter gets underway at MT&T Stadium on Sunday, it will be the quarterbacks who once again will be under the spotlight.

For Steelers QB Ben Roethlisberger, it's set to be his final game and after a dissapointing performance in his team's win over the Cleveland Browns on Monday night, he will be looking help his team secure another win against one of their fiercest rivals and extinguish any hope of them reaching the playoffs in what would be a memorable farewell for the 39-year-old.

The Ravens on the other hand will be without Lamar Jackson who has been ruled out the game with an ankle problem, therefore second-year QB Tyler Huntley will make a third straight start. While Huntley has been posting some solid numbers for a back-up QB (he's completed 69.2% of his passes for 225.3 yards per game), he will be coming face-to-face with one of the NFL's most fierce defensive players, T.J. Watt.

The Steelers outside linebacker has been a standout performer on the defensive side of the ball this season and is looking to make some personal history of his own by breaking Michael Strahan's 20 year record for most sacks in a season.

While it maybe a complicated road to reaching the 2021 playoffs, this week 18 clash has all the ingredients to be a classic. A back-up QB going up against a seasoned veteran who is looking for one last hurrah, a defensive juggernaut hoping to become a history maker on his rival's patch, all while postseason aspirations hang in the balance.

Here's everything you need to know about Ravens vs. Steelers.

Where is Ravens vs. Steelers?

The game will take place at MT&T Bank Stadium, the home of the Baltimore Ravens.

What time is Ravens vs. Steelers?

How to watch Ravens vs. Steelers: TV, live stream