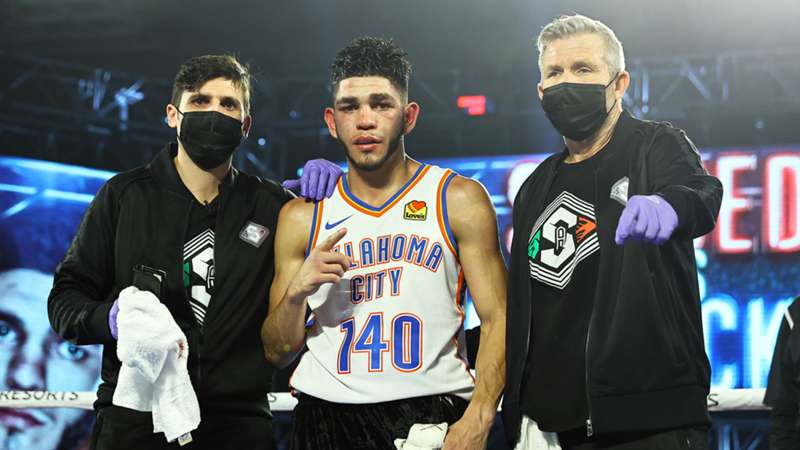 Alex Saucedo put on an offensive display as he dominated Sonny Fredrickson and secured a unanimous decision victory.

Alex Saucedo bulldozed his way to a unanimous decision victory over Sonny Fredrickson in the main event of Tuesday night’s Top Rank card at the MGM Conference Center in Las Vegas.

Saucedo (30-1), who is best known for his blistering all-out war with Lenny Zappavigna in 2018, was all offense throughout the 10-round junior welterweight clash. The strong performance inched him closer to a world title opportunity.

Saucedo's plan was simple: plow forward and throw punches. Fredrickson (21-3) couldn't have expected anything different from his opponent, but he was still overwhelmed.

There were questions about the Oklahoma City fighter's approach after he left trainer Abel Sanchez and hired Pedro Neme Jr. and Eddie Autry following his 2018 loss to Maurice Hooker. The effects of the team change weren’t seen in Saucedo's first fight after the switch, a first-round knockout of Rod Salka last November, but they were evident against Fredrickson. Saucedo varied his approach Tuesday by going to the body, but he still put offense first.

"I am a more disciplined fighter," the 26-year-old Saucedo said. "But I'm still an aggressive fighter who goes for the knockout. That won’t change."

Saucedo set the pace early by bullying his way inside and hurting Fredrickson late in the first round with a volley of punches to the head and body. The assault continued into the second round as Saucedo refused to allow Fredrickson to breathe and occupy any airspace between the two.

Fredrickson finally decided to meet Saucedo in the middle of the ring at the start of the fourth round and fought back by opening up his offense. He found mild success but had neither the conditioning nor the firepower to fend off his opponent.

It was rinse and repeat from there. Fredrickson occasionally landed an uppercut on the inside or a counter hook, but Saucedo's pressure was simply too much, and it resulted in scorecards of 99-91, 98-92 and 100-90.

"I am ready to take over the 140-pound division," Saucedo said. "Whatever opportunity comes my way, I will take advantage of it. Most importantly, I got rid of the ring rust and went 10 hard rounds."

In the co-main event, Josue Vargas (17-1) easily outboxed Salvador Briceno (17-6) and pitched a near shutout to earn a unanimous decision in a 10-round junior welterweight bout.

The only adversity Vargas faced was not having his father and trainer in the corner. Elario Vargas was barred from the fight after he violated the rules of the COVID-19 bubble by not wearing his mask on the MGM Grand casino floor.

Josue Vargas was incredibly emotional during a prefight interview, but he didn’t let it affect his performance. He put on a boxing clinic against the slow-footed Briceno.

Although Vargas teased that he would commit to fighting on the inside, he spent the majority of the bout utilizing exceptional footwork to stay at range, dodging Briceno’s punches and effectively countering. When Vargas did decide to fight on the inside, he was simply too quick and accurate for Briceno.