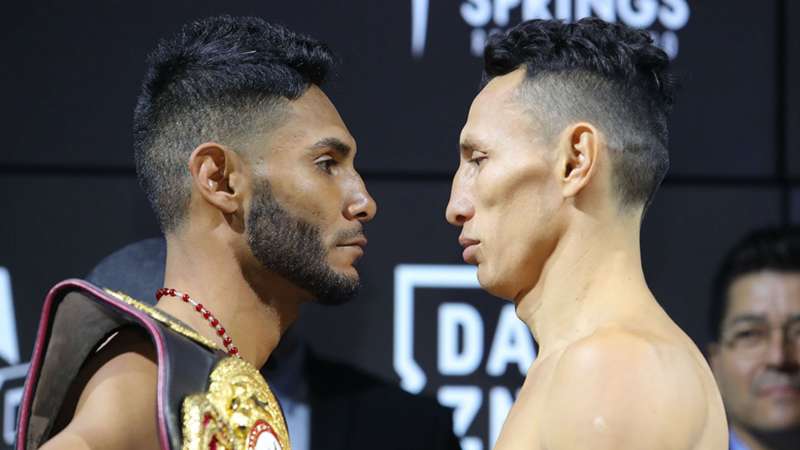 Rene Alvarado looks to prove the first fight against Andrew Cancio was a fluke when he challenges the latter for the WBA (regular) super featherweight title on Saturday, Nov. 23 at ​Fantasy Springs Resort Casino in Indio, Calif., live and exclusively on DAZN.

They met back in December 2015 at the same venue as the rematch with Cancio notching an eighth-round knockout in the all-action affair. A lot has changed for both fighters since then.

The 30-year-old Cancio (21-4-2, 16 KOs) took the boxing world by storm this year when he scored a fourth-round knockout over heralded prospect Alberto Machado in February to win the WBA belt. Machado invoked his rematch in June, but Cancio proved that he's the real deal by running through him in three rounds. Cancio knew that Alvarado was the mandatory challenger and would likely have him next.

"I'm very excited to return to my second home, Fantasy Springs Casino on November 23 for the rematch with Rene Alvarado," Cancio said in a press release. "This is my 12th time fighting there, and I love the enthusiasm my fans bring to the venue in support of my fights. Rene Alvarado and I have fought before, and now he's earned another opportunity to fight me. I know he'll be very well prepared to try and take my WBA world title. However, I plan on defending my championship in impressive style once again and show boxing fans in attendance and watching on DAZN that I'm the best 130-pound fighter in the world, period!"

Since their first fight, Alvarado (31-8, 20 KOs) has compiled an 8-2 record, which includes a current seven-fight winning streak to earn the opportunity to capture the first world title of his career.

"Nicaragua is known for its great world champions, and I'm one step away from becoming one," Alvarado said. "I'm coming for the victory against Andrew Cancio on November 23. We know each other very well, and it's going to be a war."

Here’s a complete guide to the Cancio vs. Alvarado 2 fight, with undercard information and more.

When is Andrew Cancio vs. Rene Alvarado 2?

Cancio fights for the third time in 2019, while Alvarado steps into the ring for the second time this year. Cancio and Alvarado are expected to make their walks into the ring at 11:30 p.m., but that's tentative due to the undercard bouts, which could delay the main event.

Cancio vs. Alvarado 2 live stream: How to watch

The Cancio vs. Alvarado 2 fight isn't available on a traditional television channel or pay-per-view. Fight fans in North America can sign up to watch the fight online on DAZN.

How much does Cancio vs. Alvarado 2 cost?

Where is Cancio vs. Alvarado 2?

The Andrew Cancio vs. Rene Alvarado rematch will take place live from the Fantasy Springs Resort Casino in Indio, Calif.

This marks the 12th time that Cancio fights at the venue in what has become his home away from home. Alvarado isn't a stranger to arena either, as he'll competing there for the fourth time.