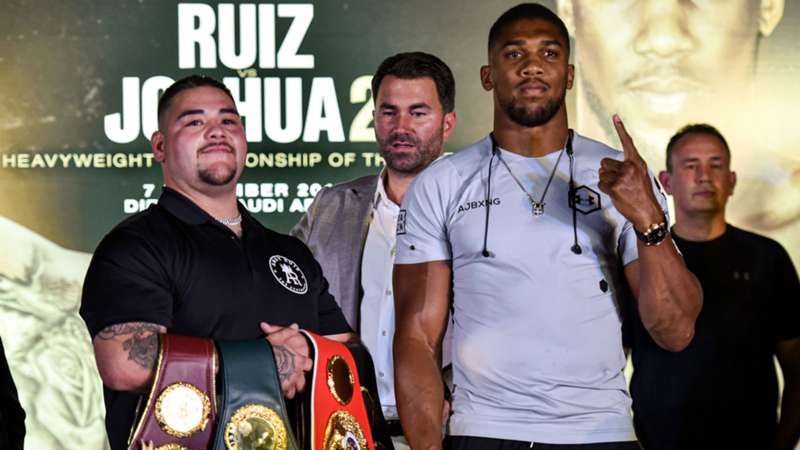 The world tour for the heavyweight title rematch between Andy Ruiz Jr. and Anthony Joshua kicked off in Saudi Arabia.

Back in June, Andy Ruiz Jr. stepped up to the plate on one month's notice as a replacement for Jarrell Miller and knocked down Anthony Joshua four times to win by seventh-round TKO, pulling off one of the biggest upsets in boxing history.

The 29-year-old unified titleholder plans on quieting those who doubt he can win again, saying Wednesday he will beat Joshua the same way he did the first time around.

"I'm really excited," Ruiz said at a press conference in Saudi Arabia, one stop on a three-city tour promoting the Dec. 7 heavyweight rematch. "I’m going to make history, and I’m going to win here [in] the same fashion I won June 1. I’m going to prove everybody wrong."

A laser-focused Joshua (22-1, 21 KOs) was a man of few words on the dais. While respectful of the fact that Ruiz beat him, the 2012 Olympic gold medalist vows things will be different in December, claiming the belts he lost will be heading back to the United Kingdom.

"I was only the champion until June 1 as Andy is champion right now," Joshua said. "That will last only until Dec. 7, and he has to put his titles in the air, and two warriors go to war, and the best man will walk out victorious. I’m really looking forward to the challenge."

Since the historic victory, much has been made of how Ruiz has acted outside of the ring. He reportedly had a lavish birthday party and bought a mansion and new Rolls-Royce, but he failed to train as though he was prepared to remain a champion for more than a few months.

The man who holds three of the four significant heavyweight belts says that isn't the case. The drive he possessed before June 1 is still there and has only intensified now that he's on top of the boxing world.

"The hunger remains. I don’t want to be a [person with] 15 minutes [of] fame. I want it to last. I want it to be a generation. I want to be a champion for more years. I want to challenge it. I have a good fighter right here next to me. He’s going to try to take these belts. God is with me, and we’re going to be training really hard for Dec. 7."

Even though Ruiz and Joshua disagree on who will walk out the winner in Saudi Arabia, they both agreed on what the fans can expect once the first punch is thrown.

"Some people may support me," Joshua said. "Some may support Andy. At the end of the day, we will have a good night of boxing.